Twitter users are making up their own funny weddings rules and traditions ahead of the royal wedding this weekend.

On Sunday, the account @HastagRoundup and its spinoff @HashFakeFacts challenged social media users to tweet their own ‘fake wedding facts’ ahead of Prince Harry and Meghan Markle’s ‘I do’s’ — and hundreds have obliged with their own made-up twists on nuptials.

While some tweets are sarcastic, others imagine weddings gone wild in which guests throw baked potatoes instead of rice, umpires conduct the ceremonies, and blinged-out bears proceed the bride down the aisle. 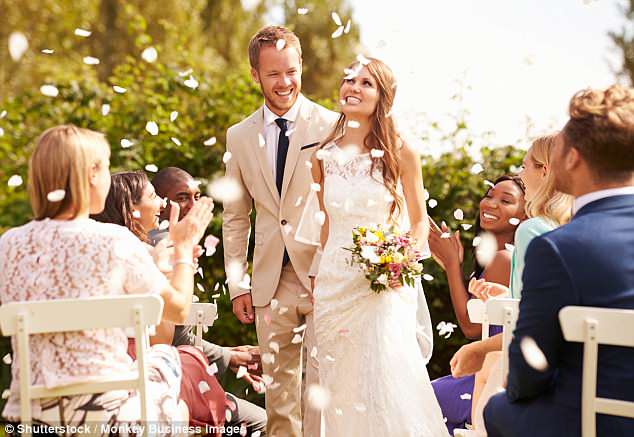 Game: The account @HastagRoundup and its spinoff @HashFakeFacts challenged social media users to tweet their own ‘fake wedding facts’ ahead of the royal wedding

Ouch! Hundreds obliged, including this man who joked about baked potatoes being thrown at newlyweds

What happens in Vegas… doesn’t always stay in Vegas, especially when social media and legally-binding marriage contracts are involved

Yikes! Signing a piece of paper and spending a lot of money on a party won’t make a couple’s issues go away

But it will end in a home run! Umpires need to go through the same steps as anyone else to perform a marriage

Sorry! Crossing fingers is not recognized under the law

Showy: In fact, some people say that the more lavish the wedding, the less sturdy the relationship

Are you saying ‘ring bear’? This Twitter user likely learned this ‘fact’ from Barney on How I Met Your Mother 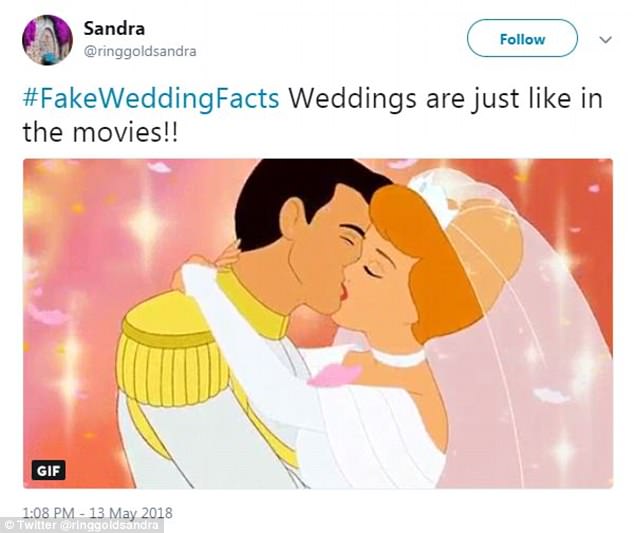 Not always… To be fair, the royal wedding this weekend will be a whole lot like a Disney movie

Some of the funniest ‘fake wedding facts’ put a twist on the usual wedding traditions.

‘In Ireland, instead of rice guests throw baked potatoes,’ wrote one Twitter user.

‘It’s okay to throw Rice Krispies Treats at a wedding if that’s all you have,’ added another, while a third tweed: ”Rice should be evenly cooked before throwing.’

‘Ringbearers are simply bears that wear jewelry,’ quipped one, who seems to be a fan of the show How I Met Your Mother.

‘Umpires can officiate a wedding in any ballpark in America,’ joked yet another person.

A few had rules for guests, like: ‘Restraining orders don’t apply to people who need to speak now or forever hold their peace.’

Yuck! It’s not very popular to throw rice at newlyweds anymore — but cooking it would just make it stick in clumps 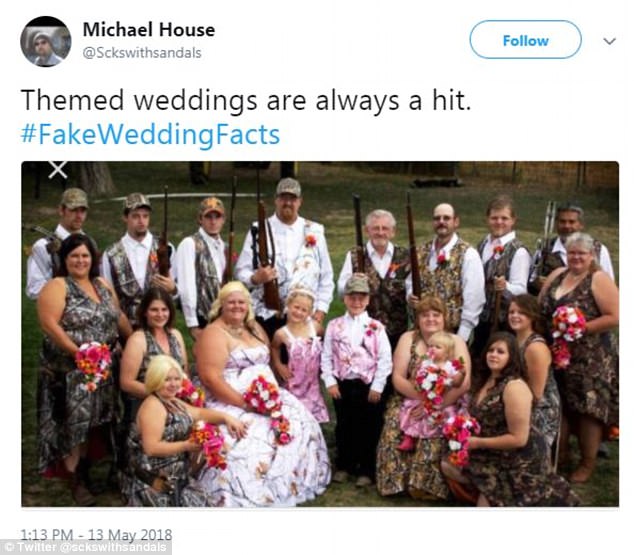 Don’t shoot! This person doesn’t appear to think much of this couple’s hunting-themed wedding

Uh-oh! Someone taking this advice seriously would definitely cause offense 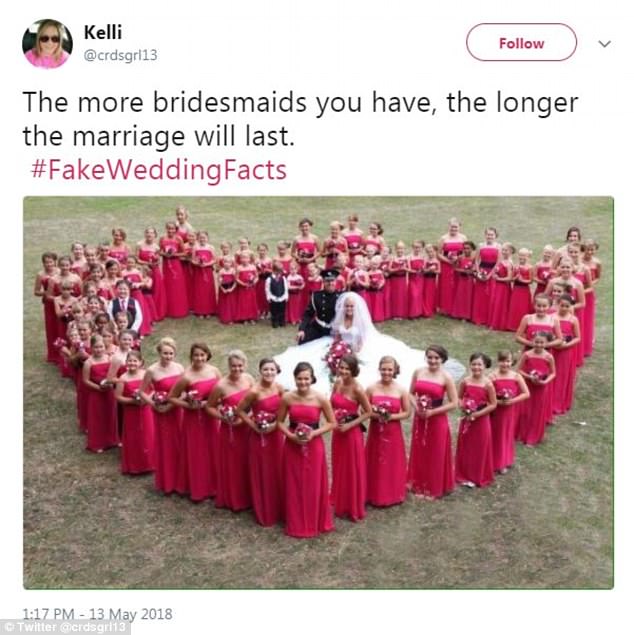 Holy moly! The picture accompanying this tweet — showing more than bridesmaids — really says it all

People of Walmart: This woman doesn’t think much of discount store Walmart’s dresses

Nope! Some couples seem to think a wedding is an excuse to spend well outside their means

‘If the marriage doesn’t last a year, you can reclaim your wedding gift,’ tweeted a woman named Lee Ann.

‘It’s customary to leave the card of a good divorce attorney as a wedding gift in most western societies,’ added Amber C.

Quite a few have shared tongue-in-cheek advice for couples, like, ‘You can marry as many people as you like in Vegas. Because it just stays in Vegas.’

‘The more money that you spend on the wedding, the happier your marriage will be,’ wrote a man named Dustin G. 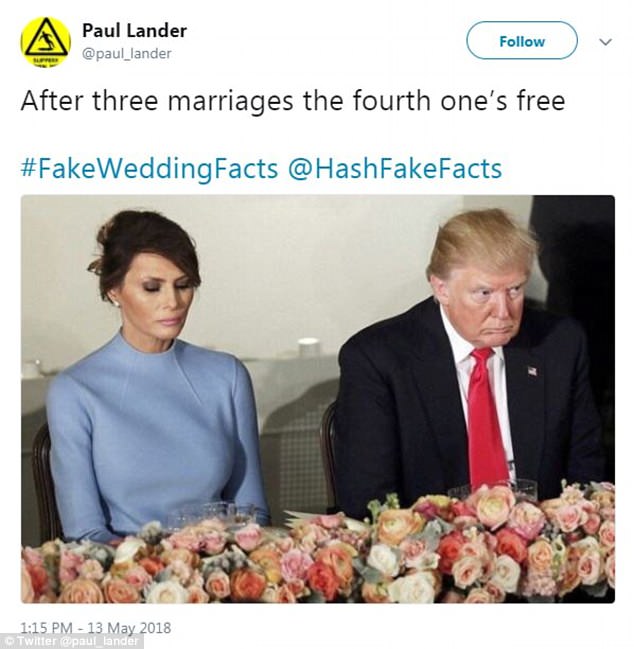 The charm? This person got in a dig at Donald Trump, quipping that if he divorces Melania, his fourth marriage will be ‘free’

Please don’t! This woman joked that a couple having a religious ceremony should give the priest a kick for good luck 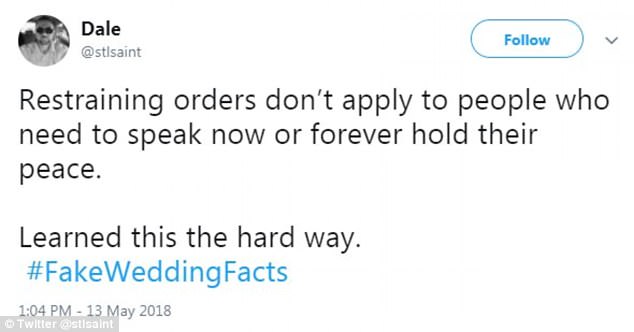 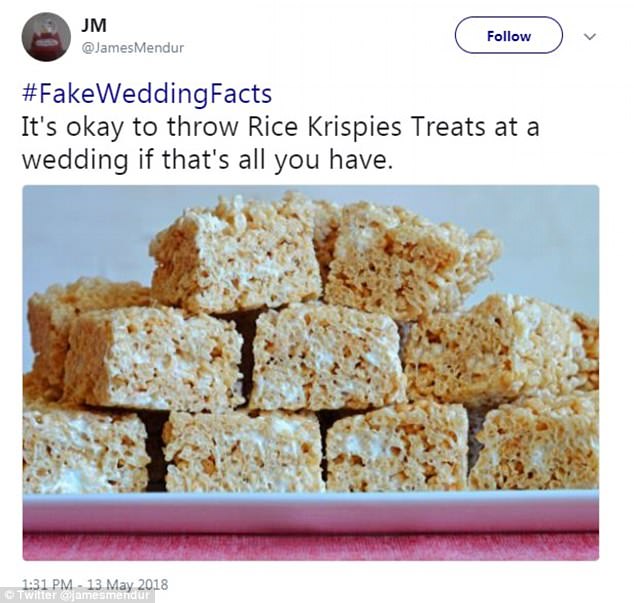 Toss ’em! Several people suggested funny things to throw at the couple after the ceremony 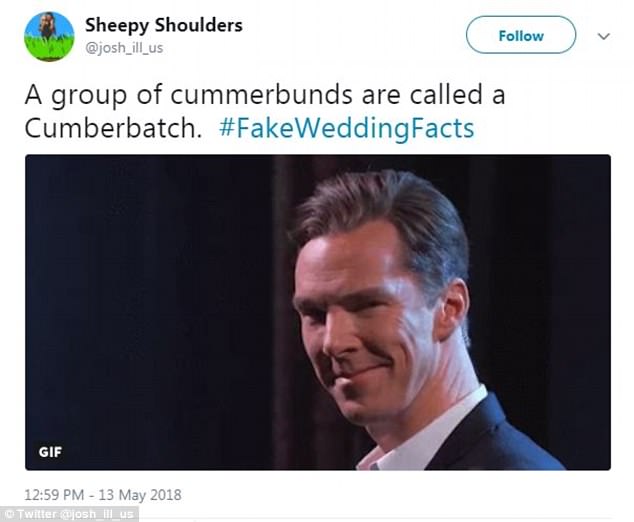 Has a nice ring to it! There is not actually a name for a group of cummerbunds

And a drink, too? This seems like a suspiciously good deal

On the flip side, a woman named Kerry Teddy tweeted that ‘Walmart is the best place to buy Wedding dresses.’

‘If you cross your fingers while saying, “I do” you have 14 days to end the marriage no questions asked,’ wrote Jeff Dwoskin.

And then, there is the sarcastic advice. A woman named Caitlin Tierney wrote, ‘Getting married saves your broken relationship.’

‘After three marriages the fourth one’s free,’ added a man named Paul Lander, including a picture of Donald Trump.

‘It’s best to save your virginity for your second marriage,’ joked another Twitter user, while one suggested: ‘If it’s a religious ceremony, always kick the priest in the balls for good luck.’