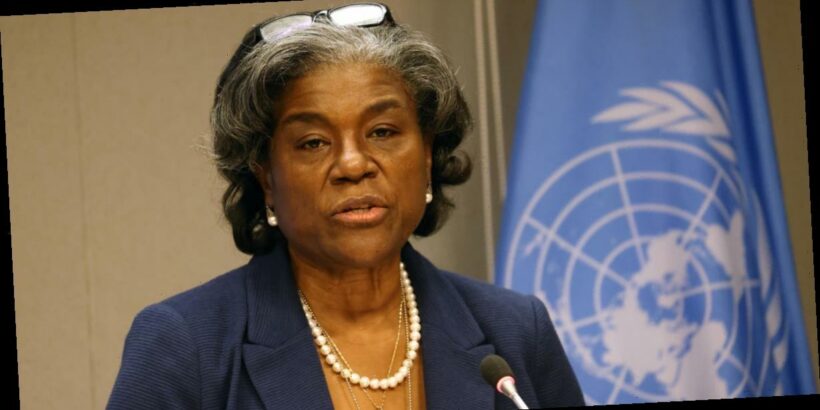 United Nations — The Biden administration’s U.N. Ambassador Linda Thomas-Greenfield gave a stirring and deeply personal address to world leaders at U.N. Headquarters on Friday during a session on the “elimination of racism, racial discrimination, xenophobia and related intolerance,” recounting troubling chapters from her own life story.

“I am a descendant of slaves. My great grandmother Mary Thomas, born in 1865, was the child of a slave. That is just three generations back from me,” she said.

“I grew up in the segregated South. I was bussed to a segregated school and on weekends, the Ku Klux Klan burned crosses on lawns in our neighborhood. When I was in high school, I was asked by a little girl, for whom I babysat, if I was an N-word because her dad had used the word for me.”

Thomas-Greenfield, speaking to the U.N. General Assembly on the International Day for the Elimination of Racial Discrimination, told the assembled leaders: “I know the ugly face of racism. I lived racism. I have experienced racism. And I survived racism.”

Let us expose the racism and racial discrimination endemic to every society around the globe. Let us press forward to root out that discrimination and remove the rot from our foundations. And let us leave our children a less hateful, more hopeful world. pic.twitter.com/mei64aBMNK

She called on all countries to “ratify and implement the International Convention on the Elimination of All Forms of Racial Discrimination,” and said that on the day “dedicated to ending racial discrimination, as our flags fly at half-staff, let us leave our children a less hateful, more hopeful world.”

“Let us give them a future. A future without fear. A future without violence. That is the legacy that I hope they can inherit,” she said, delivering her strong remarks in person as socially-distant diplomats listened intently.

“Diplomats aren’t used to hearing personal stories in official settings and Ambassador Thomas-Greenfield gave a moving speech that was all the more powerful because it drew on her personal experience,” Jamaica’s U.N. Ambassador Courtenay Rattray, who was in the General Assembly Hall for her talk, told CBS News.

“I thought of the words of Jamaica’s Bob Marley while listening to her: ‘Who feels it, knows it,'” Rattray said.

Thomas-Greenfield told the Senate during her confirmation hearings that she intended to highlight issues of diversity and racial discrimination when she took on the job. She said that the U.S. leadership at the U.N. “must be rooted in our core values: support for democracy, respect for universal human rights, and the promotion of peace and security.” And she made clear during the early days of the Biden presidency that she would “focus on helping to restore trust and professionalism to the State Department, with a particular focus on diversity.”

“The FBI has reported a spike in hate crimes over the past three years—particularly against Latino Americans, Sikhs, Muslim Americans, Jewish Americans, and immigrants,” she said in her speech Friday. “The most recent data shows hate crimes rising to a level not seen in over a decade. And that doesn’t capture the bullying, discrimination, brutality, and violence that Asian Americans have faced since the outbreak of COVID-19.”

To diplomats who often hear envoys lavish sometimes exaggerated praise on their nations, she was unusually frank: “As the scholar Isabel Wilkerson argues, humans in all contexts have ranked human value, pitting the presumed supremacy of one group against the presumed inferiority of others. In America, that takes many forms. Chief among them: our legacy of white supremacy,” she said.

“This year, the senseless killing of George Floyd, Breonna Taylor, and so many other Black Americans sparked a reckoning with racial justice, a movement that spread across the world: Black Lives Matter,” she continued.

“And because Black Lives Matter, we need to dismantle white supremacy at every turn.”

Thomas-Greenfield outlined the first two months of the Biden administration’s actions as she spoke to delegates focused on racism. She said the administration’s priorities included redressing racial discrimination in housing; ending private prisons that warehouse young Black and brown men; respecting the sovereignty of Native American tribes; and combatting xenophobia and discrimination against Asians, Asian Americans, and Pacific Islanders.

“The Biden-Harris administration also recognizes how the COVID-19 pandemic and economic crisis has been disproportionately damaging to members of racial and ethnic minorities,” she said. “So we have taken steps, like providing emergency relief funds, increasing access to nutritious food, and pausing federal student loan payments, that we know will particularly help Black and brown communities.”

Turning to the world, Thomas-Greenfield said, “For millions, it’s more than a challenge. It’s deadly.”

“Like in Burma, where Rohingya and others have been oppressed, abused, and killed in staggering numbers. Or in China, where the government has committed genocide and crimes against humanity against Uyghurs and members of other ethnic and religious minority groups in Xinjiang,” she said focusing on the human rights violations in Myanmar (also known as Burma) and China.

Her message was personal. She talked about her own life: “Born in poverty to uneducated parents.”

And it was upbeat: “So let me be clear: I remain hopeful.”

“I am hopeful because I have seen how communities and countries can enact change. And I have experienced that progress in my own lifetime.”

She ended with a plea: “Let us expose the racism and racial discrimination endemic to every society, around the globe. Let us press forward, to root out that discrimination and remove the rot from our foundations.”