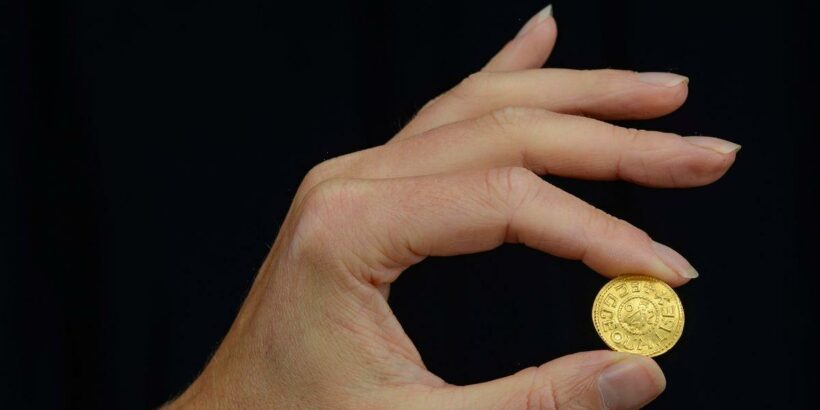 An Anglo-Saxon coin found by a treasure hunter with a metal detector could fetch for around £200,000 at auction.

The Gold Penny, or Mancus of 30 Pence, was found at West Dean, on the Wiltshire and Hampshire border, in March 2020.

Experts say it is the only late Anglo-Saxon gold coin in private hands, with eight in institutions including seven at the British Museum.

Peter Preston-Morley, head of the coin department at Dix Noonan Webb, said: "It is very exciting to see this coin, gold coins of this monarch were completely unknown until this one was found."

An analysis of the coin was done in June 2021 and it found it was made from "high-purity gold" with small levels of silver and copper.

He added: "This composition is consistent with that of natural gold which has been neither refined nor artificially alloyed.

"Gold of such purity is particularly malleable and easy to strike, but also more prone to wear and damage. None of the surface marks seem consistent with damage or alteration caused by attempts at mounting the coin for its use as a brooch or pendant."

The coin was struck at a West Saxon mint, possibly Southampton or Winchester, and bears the King's title Ecgbeorht Rex around a monogram of the word Saxon.

Peter said only eight other known gold coins were struck in England between 630 and 1257, with these likely produced for ceremonial or high-status payments.

He added: "This coin probably represents a mancus, a gold denomination that first appeared in central and northern Italy, but was current in England already before the year 800. Mancuses would have been extremely valuable coins."

But according to Peter, it is not possible to date the coin to a more specific period within the reign.