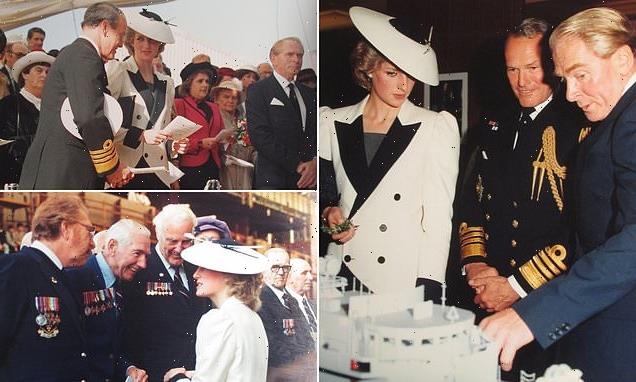 Unpublished photos of elegant Princess Diana launching H.M.S Cornwall in 1985 set to fetch up to £800 at auction

Rarely seen photos of Princess Diana from 1985 have been discovered in a bookshop in East Sussex – and could now fetch up between £500 to £800.

It is understood that the pictures, showing the Princess smiling as she greets Navy personnel in Glasgow, are mostly – if not all – unpublished, because the album would have been produced for Yarrow Shipbuilders Ltd privately, and given to the directors as a keepsake.

Diana, who had the title Duchess of Cornwall, was effortlessly elegant on the day, sporting a black and white statement blazer over a striped top for a nautical feel. 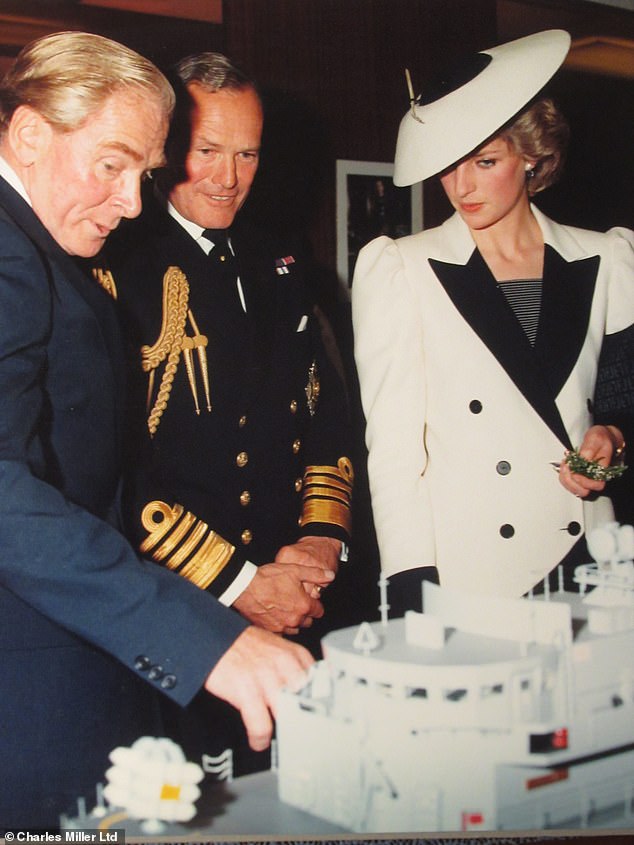 Ever the trendsetter with her accessories, she donned an matching monchrome hat and carried a simple clutch.

The People’s Princess can also be seen greeting well-wishers with Union Jacks, as one charmed fan appears to kiss her hand.

It comes amid a media storm surrounding her son Prince Harry’s explosive memoir Spare, and the interviews promoting it. 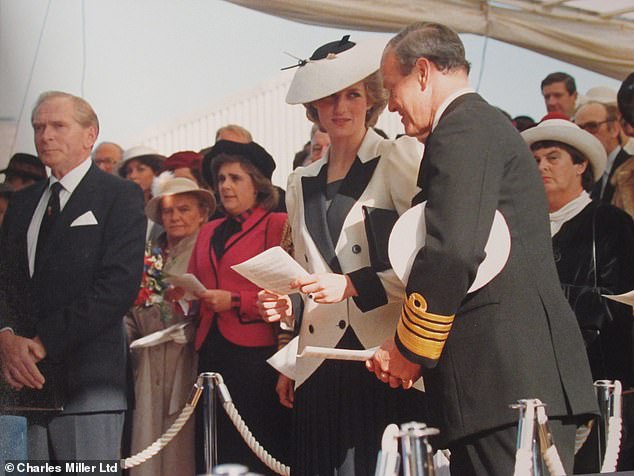 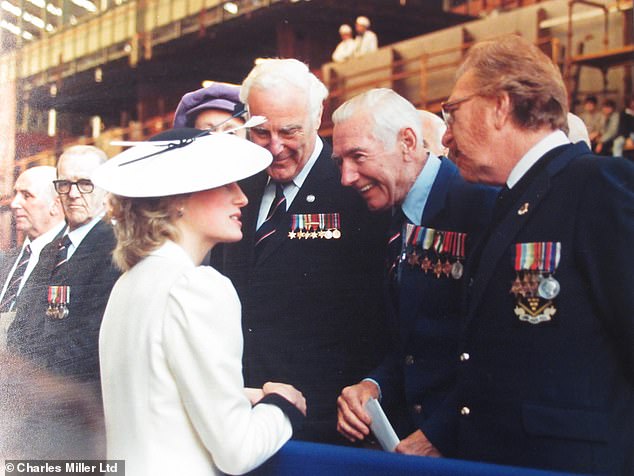 Diana – who was the Duchess of Cornwall – was effortlessly elegant on the day, sporting a black and white statement blazer over a striped top for a nautical feel

The Duke of Sussex, 38, has candidly admitted that he used to watch videos of his late mother and ‘muster up memories of her’ in an attempt to cry over her death.

He made the emotional admission during an explosive interview with CBS News’ 60 Minutes in which he revealed his ‘guilt’ at not being able to shed a tear about Diana’s tragic passing in 1997.

‘There was this weight on my chest that I felt for so many years that I was never able to cry,’ he told host Anderson Cooper.

‘So I was constantly trying to find a way to cry, but… in even sitting on my sofa and going over as many memories as I could muster up about my mum. And sometimes I watched videos online.’ 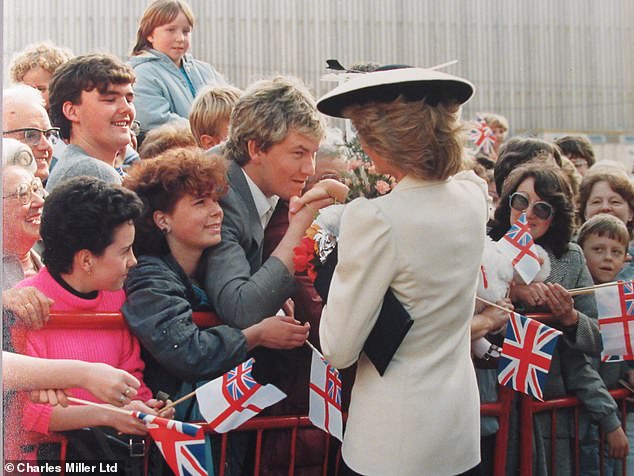 The People’s Princess can also be seen greeting well-wishers with Union Jacks, as one charmed fan appears to kiss her hand 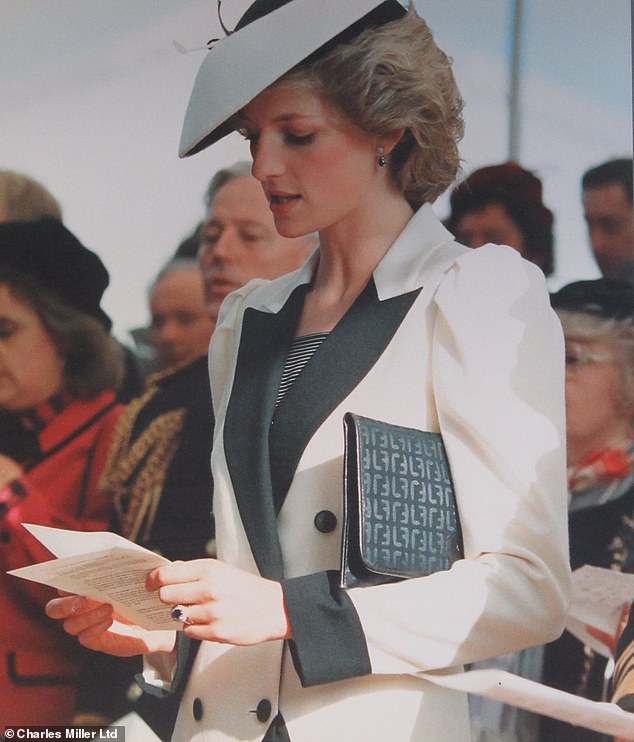 The Princess looked stunning in a nautical themed ensemble as she launched the H.M.S Cornwall in 1985 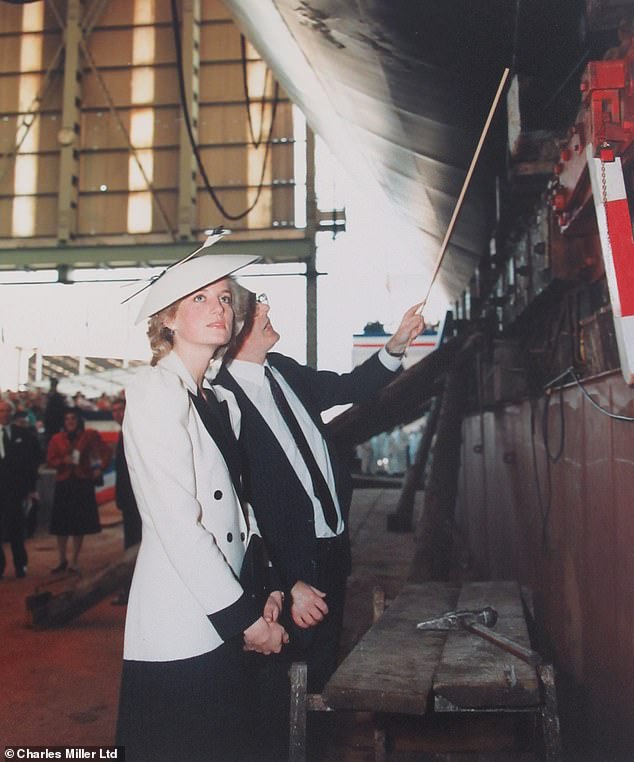 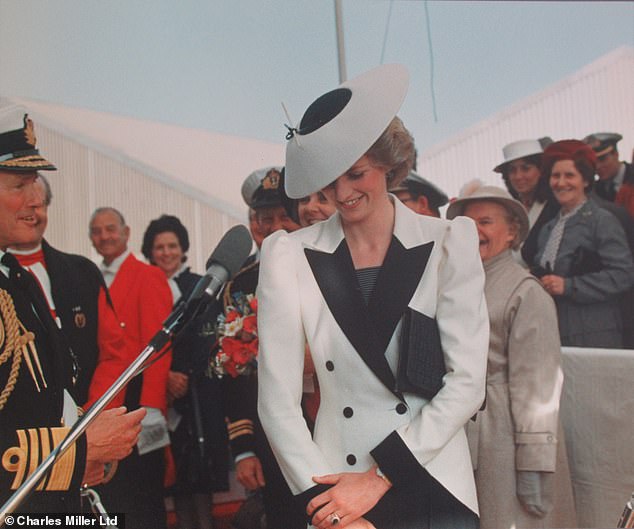 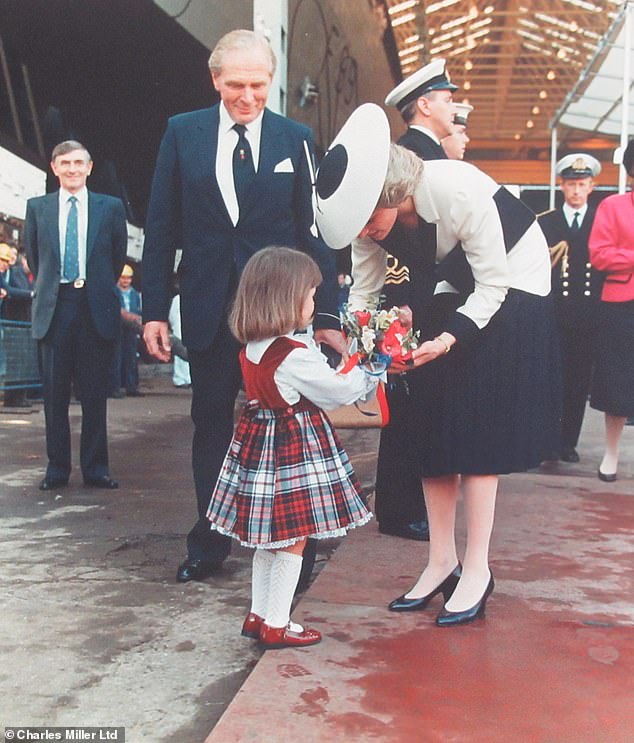 The People’s Princess was as ever a hit with well-wishers, and looked to be receiving a bouquet of flowers from a young fan

However, Harry says that, no matter how hard he tried, he ‘couldn’t’ shed a tear – something that filled him with ‘guilt’ for years.

That guilt is something that the Duke struggled with from the moment that he and his brother William greeted members of the public who had turned out to pay their respects to Diana on the day of her funeral, with Harry explaining that he was stunned at how many people were sobbing over his mother’s death.

‘There was a lotta tears. I talk about how wet people’s hands were. And I couldn’t understand it at first. 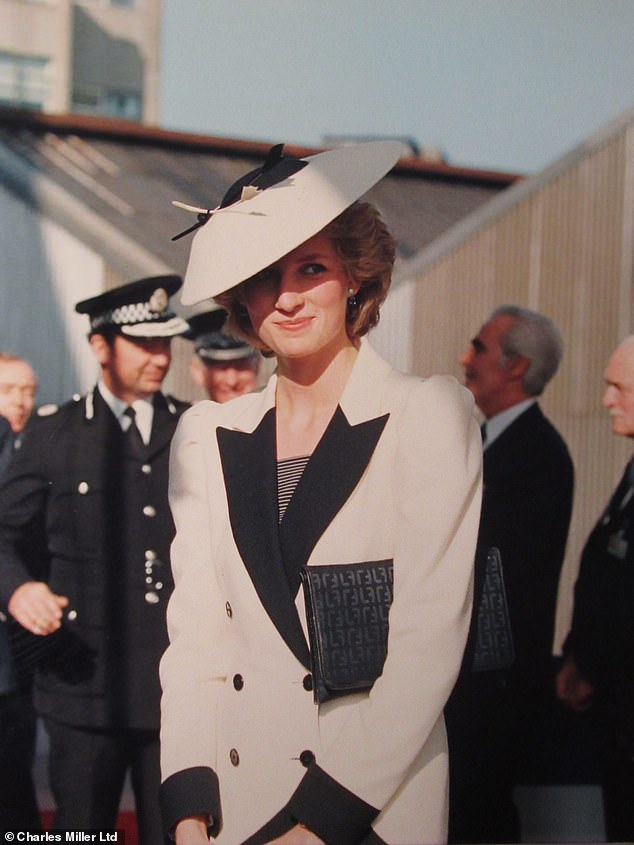 Ever the trendsetter with her accessories, she donned an ornate matching hat and carried a simple clutch 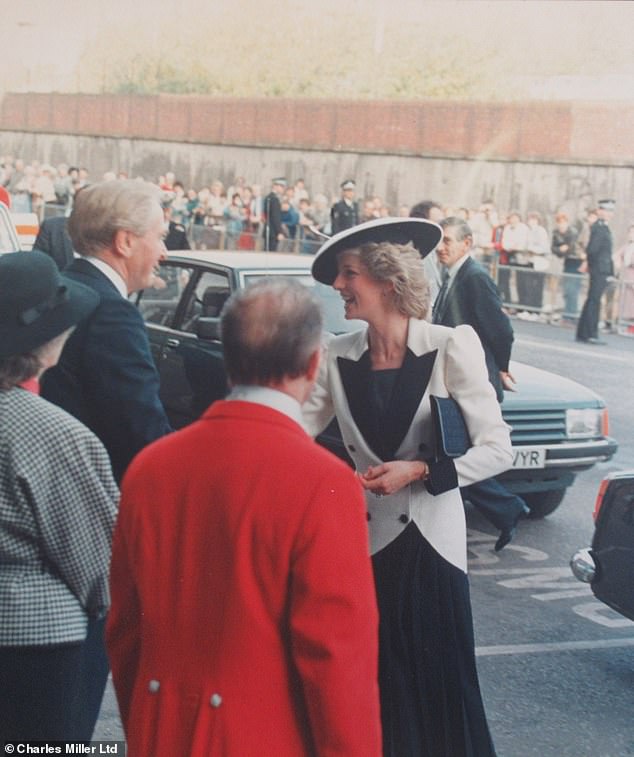 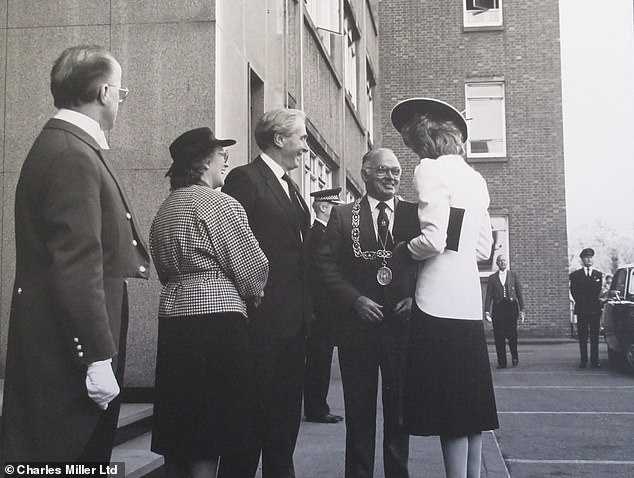 Diana was pictured wearing a chic black and white ensemble as she launched H.M.S Cornwall in 1985 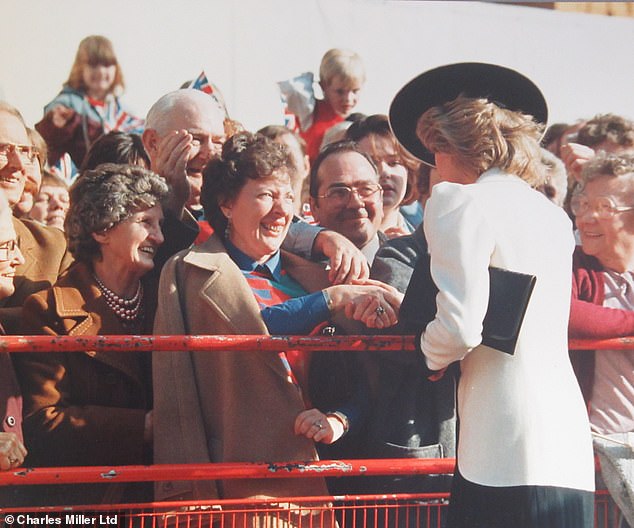 The Princess shook hands with delighted fans, who grinned as they met her, during the event in 1985 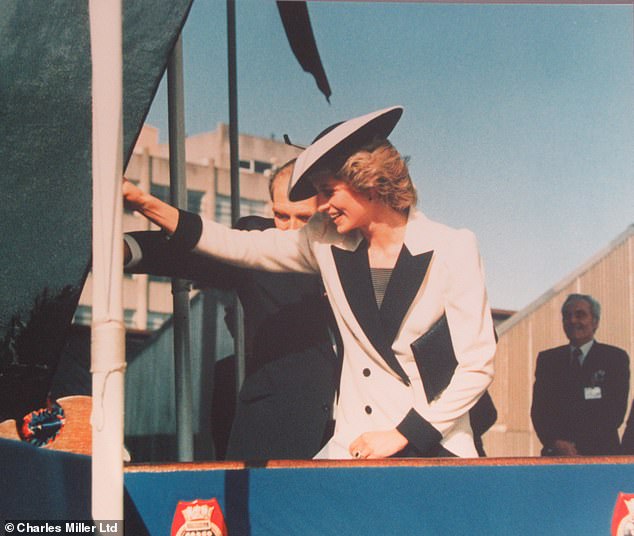 Diana wore a nautical-inspired event as she enjoyed the day, styling her blonde hair into its signature voluminous look

‘Their hands were wet from wiping their own tears away. I do remember one of the strangest parts to it was taking flowers from people and then placing those flowers with the rest of them. As if I was some sort of middle person for their grief. And that really stood out for me.’

Harry struggled with his grief for years – and says it wasn’t until he began going through therapy and experimenting with psychedelic drugs that he truly came to terms with his mother’s death.

The Duke of Sussex told Cooper that psychedelics like ayahuasca and magic mushrooms his ‘medicine’ after the huge ‘loss’ of his mother in 1997, saying that using psychedelics when he got older ultimately ‘cleared away the idea’ that he needed be sad to prove he ‘missed’ his mom.

‘I would never recommend people to do this recreationally,’ he said during the one-hour tell-all interview. 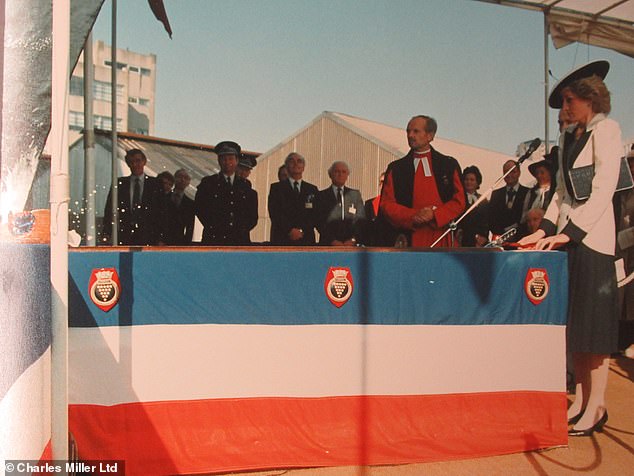 It is understood that the pictures, showing the beloved Princess smiling as she greets Navy personnel in Glasgow, are mostly – if not all – unpublished 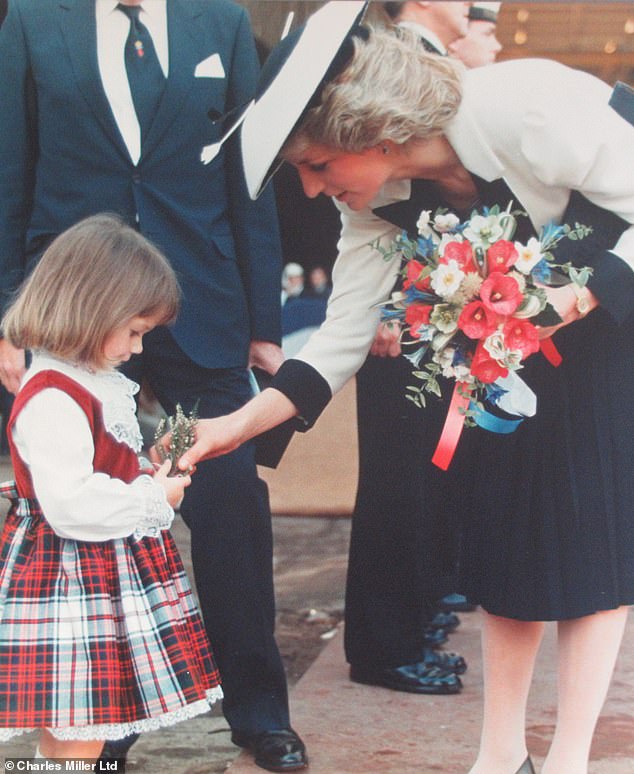 One shot captured a sweet moment between Diana and a young fan, who held onto a small bundle of flowers 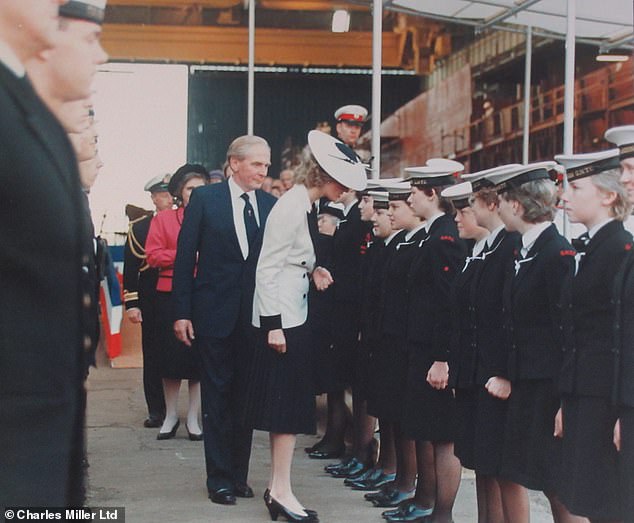 The princess sported a chic skirt and blazer ensemble for the day, looking stylish as ever for her duties 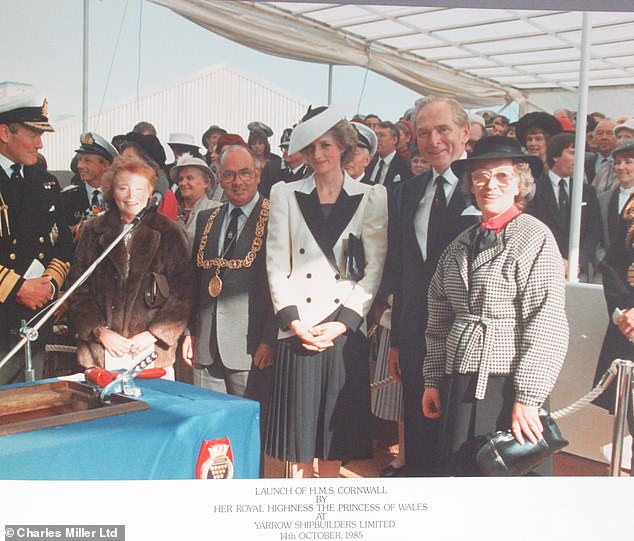 The Princess smiled and greeted well-wishers as she posed for the rarely-seen snaps in October, 1985

‘But doing it with the right people if you are suffering from a huge amount of loss, grief or trauma, then these things have a way of working as a medicine.

‘For me, they cleared the windscreen, the windshield, the misery of loss. They cleared away this idea that I had in my head that … I needed to cry to prove to my mother that I missed her. When in fact, all she wanted was for me to be happy.’

Harry explained during the sit down that he believes he didn’t cry over Diana’s death because he had ‘refused to accept that she was gone.’

The interview with 60 Minutes aired just over an hour after another TV sit-down between Harry and British journalist Tom Bradby premiered in the UK. 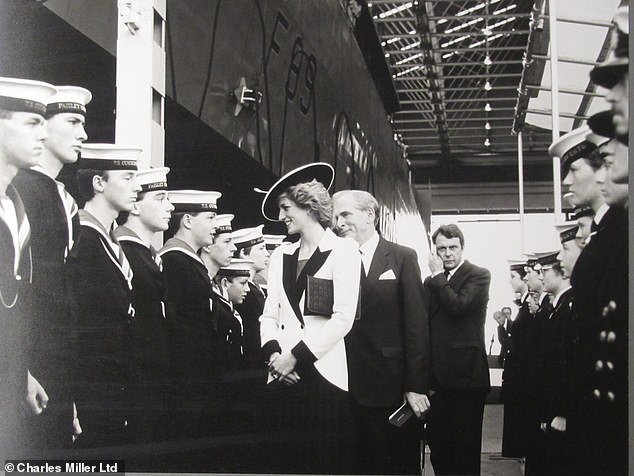 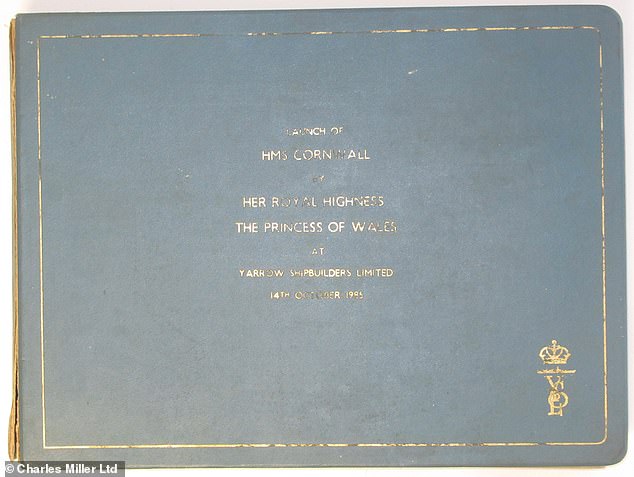 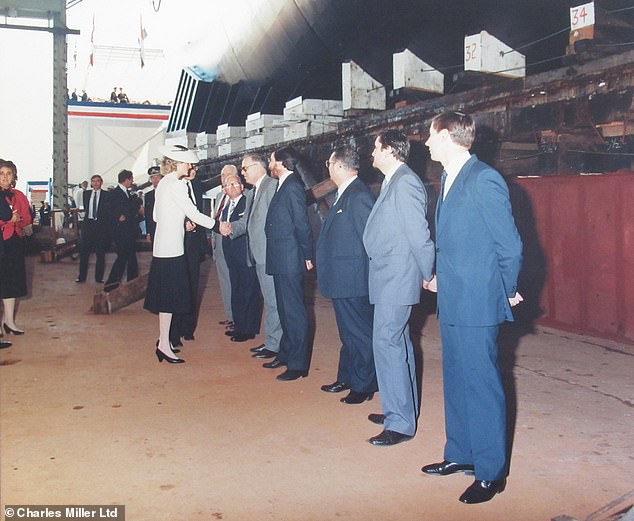 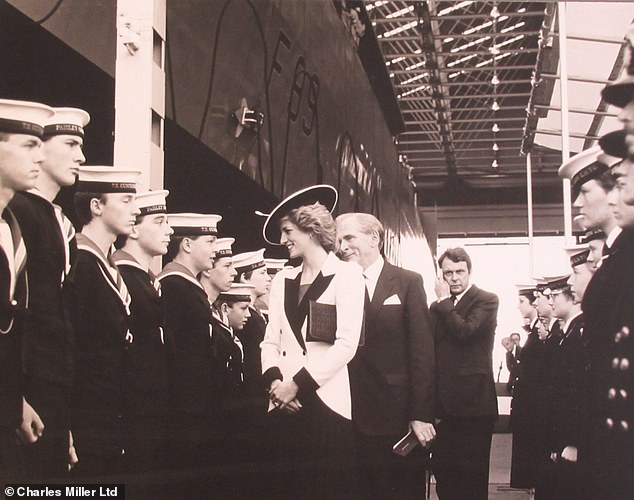 Historic snaps, found in a shop in Lewes, picture the Princess during a royal engagement in 1985

In that interview, the Duke also spoke out about his struggle to show emotion about his mother’s death, telling Bradby: ‘Everyone thought and felt like they knew our mum, and the two closest people to her, the two most loved people by her, were unable to show any emotion in that moment.

‘Everyone knows where they were and what they were doing the night my mother died.’

Harry also says that he cried once in the wake of his mother’s death – at her burial.

‘I cried once, at the burial, and you know I go into detail about how strange it was and how actually there was some guilt that I felt, and I think William felt as well, by walking around the outside of Kensington Palace.’

Which royal comes out WORST in Harry’s memoir? From ‘wicked stepmother’ Camilla to ‘arch-nemesis’ ‘Willy’ and Kate who has a ‘heavily disguised silly’ side but grew angry over Meghan