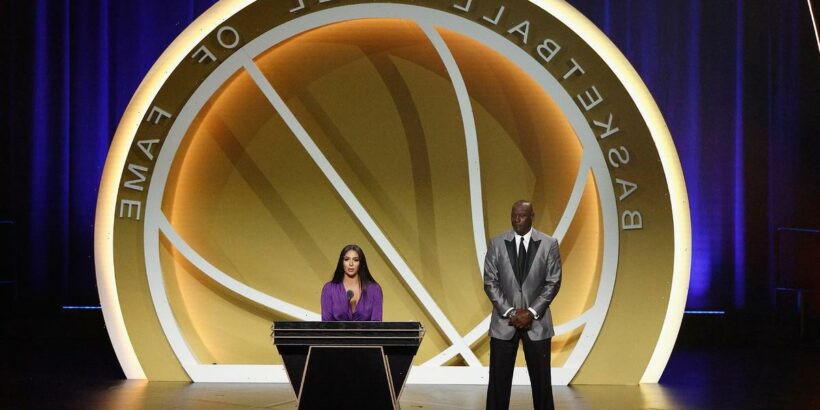 Kobe Bryant was posthumously inducted into the Naismith Memorial Basketball Hall of Fame on Saturday as part of a star-studded Class of 2020. At the enshrinement ceremony in Uncasville, Connecticut, the 5-time NBA Champion — who died in a helicopter accident in January 2020 along with his daughter Gianna and seven other people — was presented by his idol, Michael Jordan, while his wife, Vanessa, gave a moving speech.

“I used to always avoid praising my husband in public because I felt like he got enough praise from his fans around the world and someone had to bring him back to reality,” Vanessa said. “Right now, I’m sure he’s laughing in heaven because I’m about to praise him in public for his accomplishments on one of the most public stages. I can see him now, arms folded, with a huge grin, saying, ‘Isn’t this some s**t?'”

Vanessa Bryant spoke about how excited Kobe was for the Hall of Fame ceremony.

“He and Gigi deserve to be here to witness this.” pic.twitter.com/2tJegCIHWp

Vanessa Bryant said that, had he still been alive, Bryant would have thanked “everyone that helped him get here, including the people that doubted him and the people that worked against him and told him that he couldn’t attain his goals.

“He would thank all of them for motivating him to be here,” she continued. “After all, he proved you wrong.”

Vanessa Bryant lamented the fact that neither Bryant nor their daughter were there. “I wish my husband was here to accept this incredible award,” she said. “He and Gigi deserve to be here to witness this. Gigi would be so proud to watch her daddy get enshrined in the Basketball Hall of Fame.” 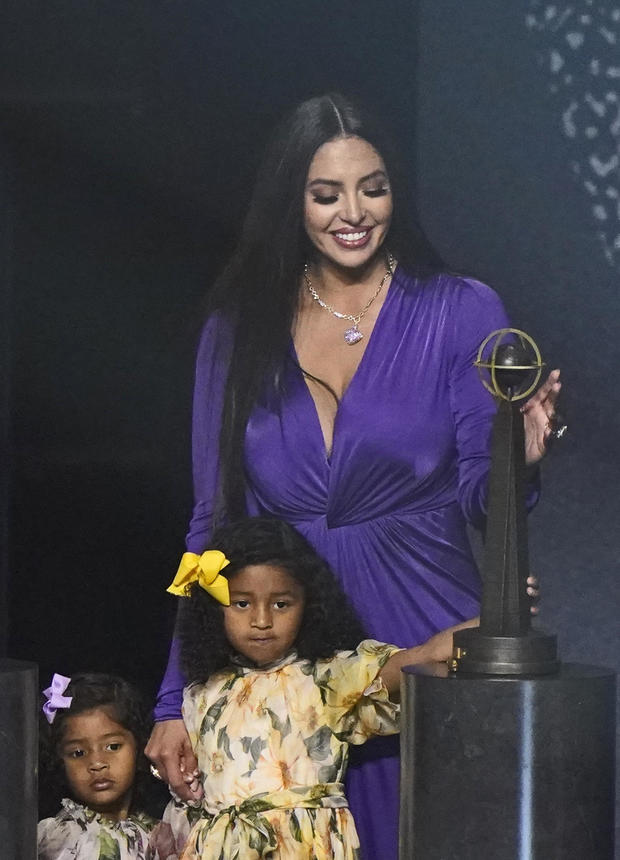 Vanessa Bryant also shared a story that illustrated Bryant’s dedication to the sport, even through devastating injuries.

“People don’t know this, but one of the reasons my husband played through injuries and pain was because he said he remembered being a little kid, sitting in the nosebleeds with his dad to watch his favorite player play,” she said, sneaking a look at Jordan and eliciting laughs from the crowd.

“He could recall the car ride, the convos and the excitement of being lucky enough to have a seat in the arena,” she said. “Kobe didn’t want to disappoint his fans, especially the ones in the 300 section that saved up to watch him play, the kids with the same excitement he once had. I remember asking him why he just couldn’t sit a game out because he was hurting. He said, ‘What about the fans who saved up to watch me play just once?'”

Vanessa Bryant spoke about her late husband’s commitment to basketball and his drive on the court, but said his greatest quality was his dedication to his family. She said “his most cherished accomplishment was being the very best girl dad.”

She ended her speech by reading a letter addressed to Bryant.

“Thank you for never missing a birthday, a dance recital, a school awards show, show-and-tell or any games our daughters played in if your schedule permitted. Thank you for putting your love for our family first. Thank you for bringing so much joy to our lives and joy to people around the world. Thank you for inspiring us to be better than we were the day before. Thank you for teaching me, and all of us, to put someone else’s joy before our own.”

“Thank you for being the Mickey to my Minnie, the Noah to my Allie. Thank you for loving me enough to last lifetimes. In every lifetime, I choose you.”

“To our girls, Natalia and Gianna, thank you for sacrificing so much time away from daddy so he could focus on being the best at everything he set his mind to do. Bianka and Capri, I’m so happy you’re here to see this tonight. Daddy was incredible. He loves you girls so very much.”

“Congratulations, baby. All of your hard work and sacrifices paid off. You once told me, ‘if you’re going to bet on someone, bet on yourself.’ I’m glad you bet on yourself, you overachiever. You did it. You’re in the Hall of Fame now. You’re a true champ. You’re not just an MVP, you’re an all-time great. I’m so proud of you. I love you forever and always, Kobe ‘Bean’ Bryant.”

As she stepped off the stage with Jordan, the packed arena gave her a standing ovation, and erupted into chants of “Kobe.”

The ceremony was packed with previous Hall of Fame inductees, family and close friends, and also included a performance by Ne-Yo, in remembrance of those who had died in the past year.