‘There is NOTHING for women with any shape!’ Victoria’s Secret customers hit out at the brand over its relaunched swimwear – insisting the sizes are too ‘small’ and the prices too ‘expensive’

Victoria’s Secret has announced the launch of its rebooted swimwear collection, but the news was met with disappointment from customers who accused the brand of creating items ‘too small’ and ‘expensive’.

The brand discontinued its swimwear line in 2016 to accommodate the slowing of sales. But Victoria’s Secret decided to bring the line back for 2019 with the inclusion of suits from Banana Moon, Kenneth Cole and Lucky Brand.

Consumers were left disappointed, though, after the new collection launched on Monday because of the lack of sizing options and how expensive the suits were to purchase. 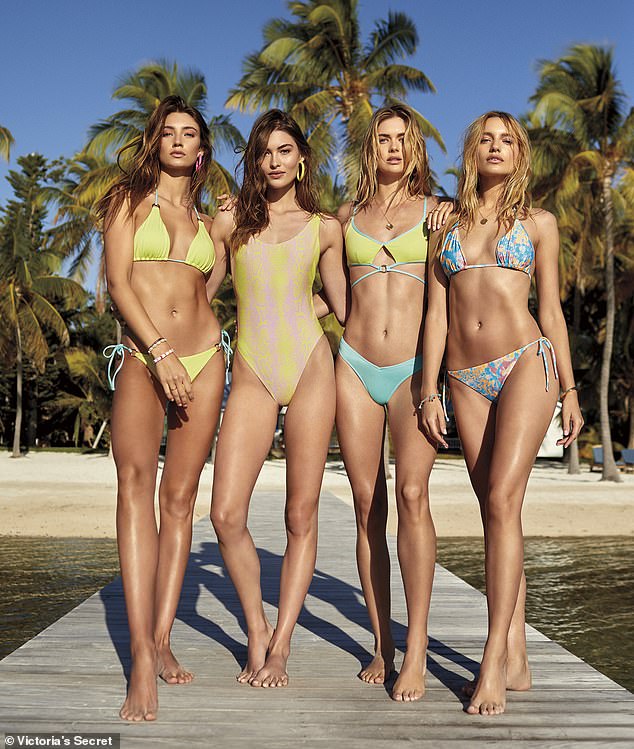 Exciting news: Victoria’s Secret relaunched its swimwear line on Monday after discontinuing it in 2016 to accommodate the slowing of sales 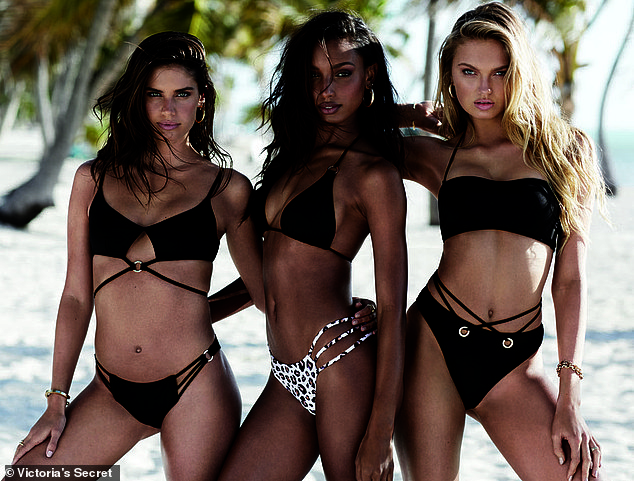 New: But brand decided to bring the line back for 2019 with the inclusion of suits from Banana Moon, Kenneth Cole and Lucky Brand

Upset: But consumers were left disappointed with the new line as they accused Victoria’s Secret of charging too much for the pieces and making them too small

Mad: One woman said she was excited to purchase the new collection, but she was unable to find anything that fit her size 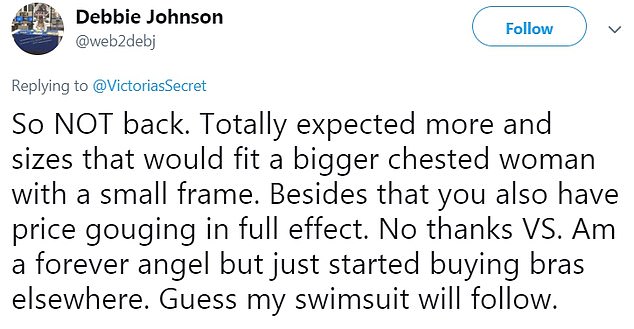 Frustrated: Other people echoed the same sentiments saying the size options were unacceptable

The new online-only swimwear line features a variety of bikinis, one-piece swimsuits, tankinis and cover-ups for people looking to update their wardrobe. Prices for the new swimwear collection range from $28 to $182 depending on the piece.

Besides price being a concern for consumers, people were also upset about the lack of sizing options from the brand’s new line. 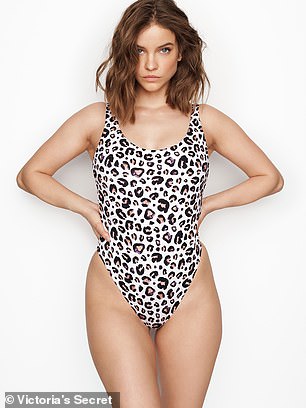 Sizing: The sizes offered for each piece range from XS to L for two-piece swimsuits while one-pieces go up to size 14

The sizes offered for each piece range from XS to L for two-piece swimsuits while one-pieces go up to size 14.

Her sentiments were echoed by others who thought Victoria’s Secret would join the growing brands — such as Aerie and ASOS — who’ve made it their mission to provide more inclusive sizing.

‘I was excited about Victoria’s Secret bring back swim but they’re not selling by cup size anymore,’ one customer wrote, ‘And my bra size doesn’t correlate with their generic XS, S, M, L sizes. So there’s that.’

Another person commented on the line: ‘So NOT back. Totally expected more and sizes would fit a bigger chested woman with a small frame. Besides that you also have price gouging in full effect. No thanks VS. Am a forever angel but just started buying bras elsewhere. Guess my swimsuit will follow.’ 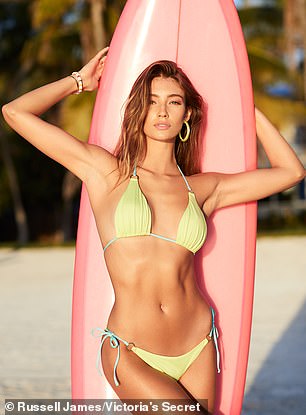 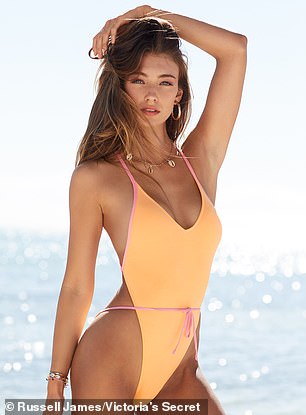 Inclusive? People accused the brand of not providing size options for plus-size women 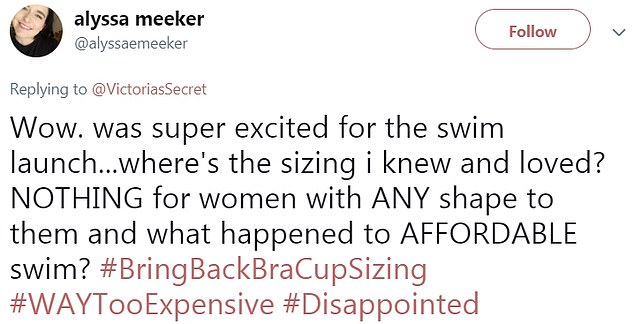 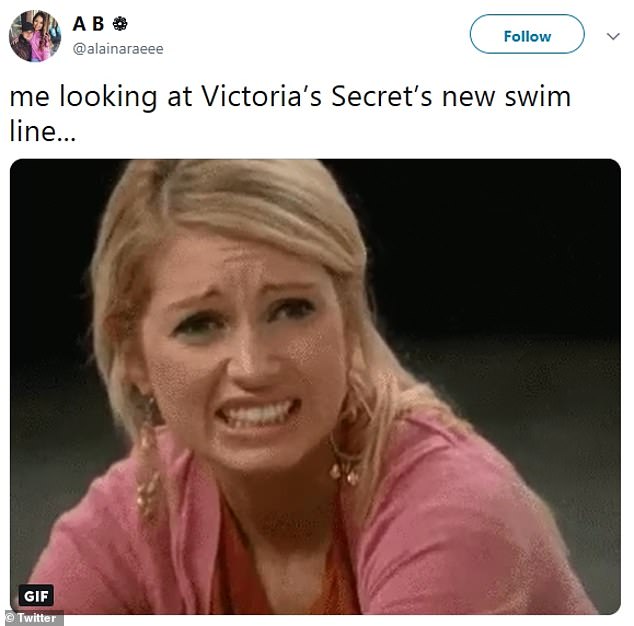 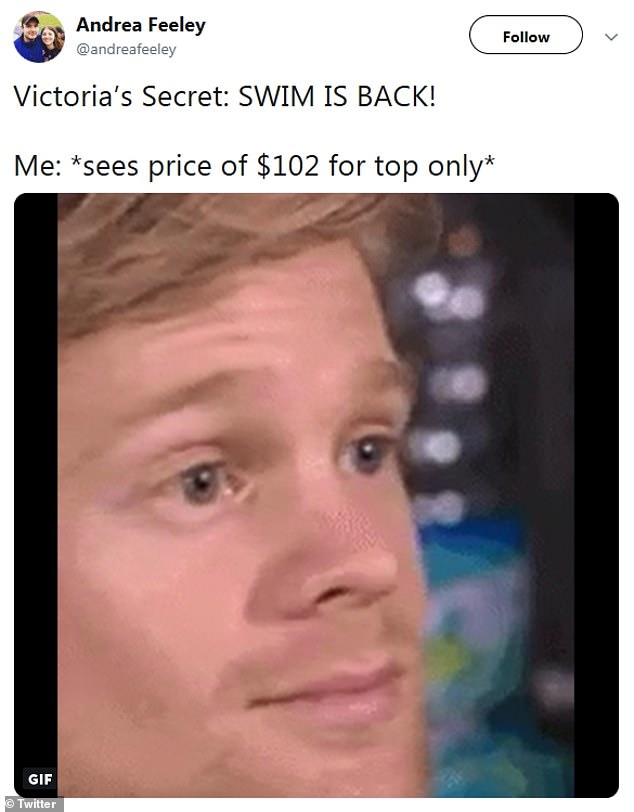 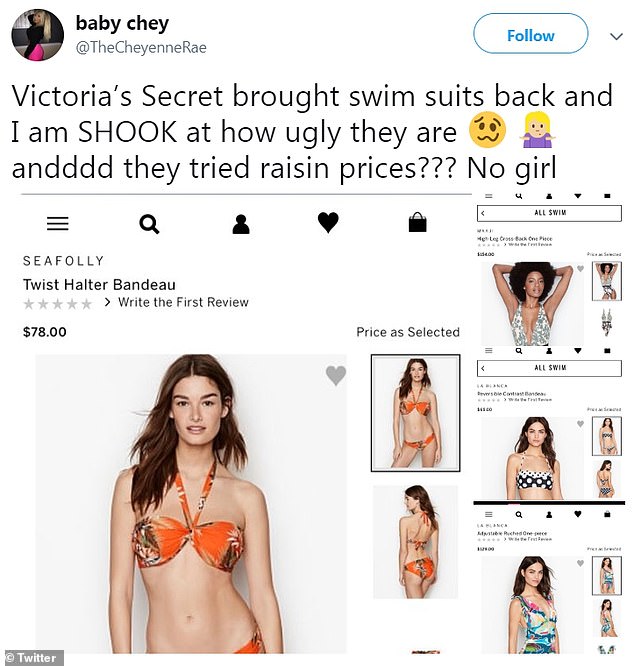 Backlash: Comments poured in on Twitter with people expressing frustration over how much Victoria’s Secret was attempting to charge consumers to purchase a new swimsuit

One woman admitted she would spend ‘hundreds of dollars’ on Victoria’s Secret swimwear, but the brand doesn’t carry her size to her disappointment.

‘I can’t say this enough, but if y’all had a plus-size line or at least sizes that were more inclusive you would get hundreds of dollars form me…it really sucks because all of [the swimsuits] are so cute,’ the disappointed woman wrote to the brand. 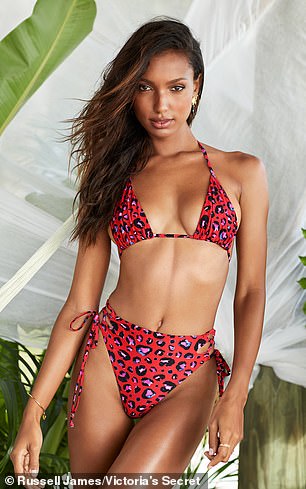 Lost a customer: One woman admitted she would spend ‘hundreds of dollars’ on Victoria’s Secret merchandise, but the brand doesn’t carry her size to her disappointment

‘We attempted to do a television special for plus sizes (in 2000),’ he told Vogue in November. ‘No one had any interest in it, still don’t.’

Price was another huge issue for customers who noticed the swimsuits looked to be more expensive than the last time the brand had a swimwear line.

While there were cheaper bikini options, such as a top for $32 and bottoms for $28, most of the items were priced higher than $45 for a bikini top. One-piece swimsuits were even more expensive with the most affordable option starting at $62.

‘Victoria’s Secret brought swim suits back and I am SHOOK at how ugly they are…and they tried raisin the prices??? No girl,’ one frustrated customer expressed.

DailyMail.com contacted Victoria’s Secret, and the brand declined to comment.