A behavioural expert has said ‘soft’ parenting is to blame for young children becoming addicted to playing Fortnite as she called for the violent video game to be banned.

Speaking on ITV’s Good Morning Britain on Tuesday, Lorrine Marer said parents needed to ‘get a grip’ and ‘say no’ after it emerged playing the controversial game is affecting primary schools pupils’ concentration and performance in class.

Marer said ‘boundaries’ must be enforced when it comes to Fortnite, which has a supposed age limit of 12 and is played by 40 million people worldwide.

And she claimed parents don’t want to say no to their children playing the game – which she said should be taken off the shelves – because they don’t want to be seen as ‘unpopular’.

However, viewers took to Twitter to slam the call for Fortnite to be banned, saying addiction is down to ‘bad parenting’ and not the games the play. 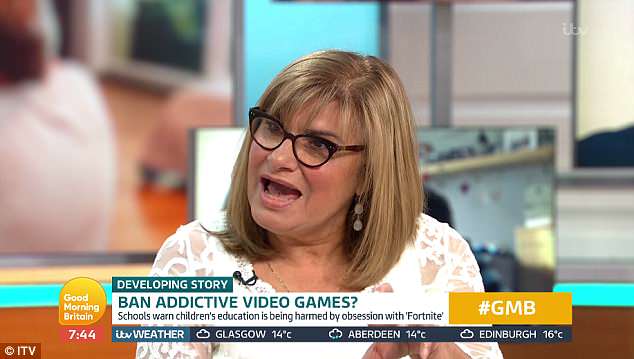 During a game of Fortnite, players battle to survive on an island against strangers online – fighting and killing each other until one only person is left, hunting for weapons such as assault rifles along the way.

The game is free to download and now schools have revealed that children are spending up to 12 hours a day on it.

Merer said: ‘Parents today do not know how to say no, because if you say no then you make yourself unpopular, and parents then believe if they’re unpopular children won’t come to them with problems. Rubbish. It’s absolute rubbish.

‘The truth of the matter is it’s very difficult to put boundaries in place around this when they’re getting ”oh my friends are doing it”. The mere fact teachers are saying get a grip to the parents, what’s that saying?’

Viewers slammed the argument, saying gaming addiction is down to ‘bad parenting’ and not the games the play

Fortnite is a game of survival where players create a superhero avatar and compete against each other on a dystopian island.

Each game, or ‘match’ as each competition is known, starts with 100 players.

The aim of the game is to be the last one standing. Users can form allegiances and play in small groups.

To enable this and the interactive experience, the game allows completely open communication between players.

Inspired by the Hunger Games novels and films, gamers search for weapons to help them survive.

Armed with quirky weapons and amusing dances, the game has swept across the gaming world, with children flocking to it.

While there is no exact figure on how many children play Fortnite, the game has so far pulled in an audience of over 3.4 million players.

Calling on the game to be banned or at the very least limited, Merer said she’d heard horror stories about children’s addiction to games.

She recalled meeting a parent who said their child had urinated in a bottle and tipped the content out of the window so they didn’t have to step away from the game to go to the toilet.

She also said she’d met a parent whose child got the shakes when their favourite game was taken away from them.

However, viewers disagreed with Merer’s argument and took to Twitter to criticise ‘bad parents’ who let their children become addicted. 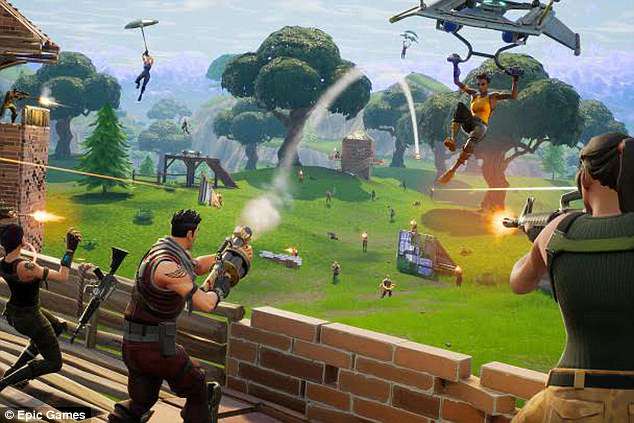 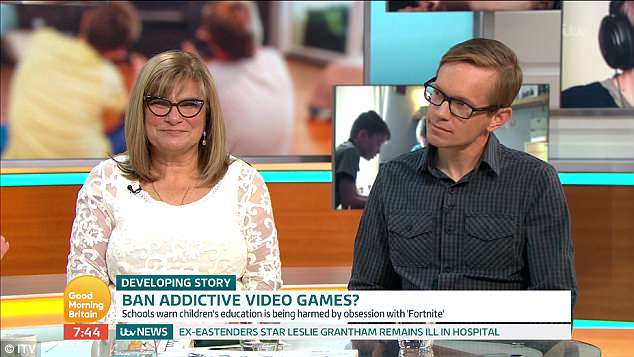 One tweeted: ‘Oh Ffs! Kids have been addicted to video games since the 80s! This is just Bad lazy parenting! Nothing to do with the game!’

Another posted: ‘The usual nonsense when kids are enjoying the latest video game. Kids have been addicted since the 80s, everyone today just wants to kick off about something. It’s on the parents, not the developers.’

A third said: ‘No one is forcing them to play fortnite and it’s the exact same as any other shooting game, parents should set rules and boundaries at home and that will stop them becoming addicted.’

Another agreed: ‘Parents wanna blame games such as Fortnite but don’t wanna take responsibility. If they feel it’s becoming too much, take the frigging console away. It’s really not that hard.’ 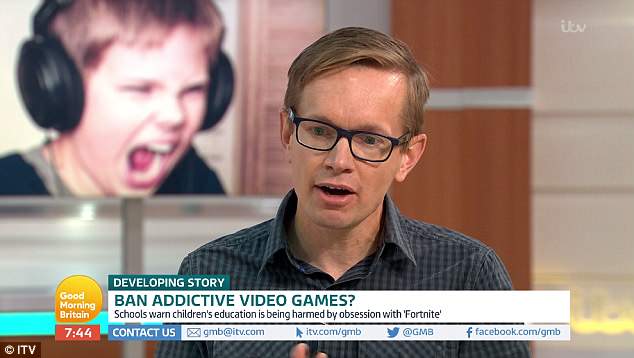 Merer was countered in the debate by gaming journalist Andy Roberston, who is a father himself and limits his own children’s time playing games.

He said: ‘Games have a lot more to them than just entertainment. I think the danger of just looking at screentime and limiting that and to just throw them means you stop the healthy debate around that.

‘We don’t think about plate time when we think about diet, we worry about what’s on the plate.’

WHAT IS THE NSPCC’S ADVICE FOR PARENTS OF FORTNITE PLAYERS?

It comes amid concerns over a function in Fortnite which automatically allows users to speak to other players through voice and text chat functions.

It means children can be contacted by anyone else who is playing the game.

Research from NSPCC revealed that that one in four children have been contacted online by someone they don’t know.

The research is based on reviews by children and parents of the most popular apps, sites and games currently on the market, featured on the Net Aware app and website.

The NSPCC is offering parents the following advice:

– Talk to your child regularly about what they are doing online and how to stay safe. Let them know they can come to you or another trusted adult if they’re feeling worried or upset by anything they have seen. You can use our conversation starters to support you when starting these conversations.

– Explore your child’s online activities together. Understand why they like using certain apps, games or websites and make sure they know what they can do to keep themselves safe.

– Agree your own rules as a family when using sites, apps and games. You can use our Family Agreement template to help you get started.

– Manage your technology and use the privacy and parental control settings available to keep your child safe.