Toddler James Warburton sits in front of an iPad, absorbed in his favourite show, Peppa Pig. Occasionally, the two-year-old repeats words. So far, so unremarkable, you might think: except that he’s parroting the phrases in French, Spanish or German.

‘You know how it is,’ says his mum, Katy, 33, ‘You feel guilty letting them sit in front of a screen, but you’ve got to get stuff done. So I figured if he’s going to watch things, they might as well be educational.

James has been watching Peppa Pig in a variety of languages since before his second birthday. His mother hopes the vocabulary will rub off or, at the very least, spark an interest in other cultures.

James has even started watching children’s YouTube videos in Mandarin. 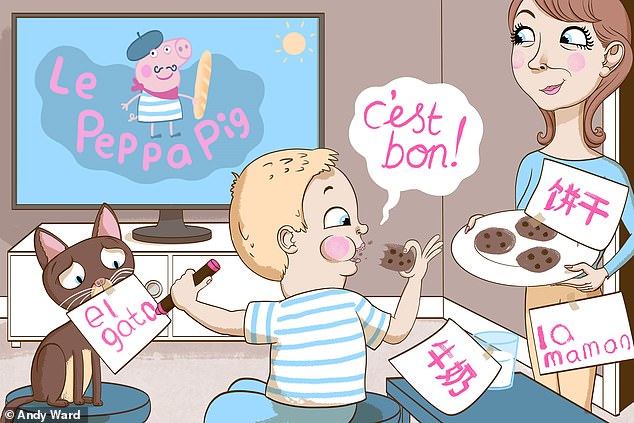 ‘There’s one where the Chinese children open eggs and inside are different colours — James repeats the colours in English after they’ve said them in Mandarin.’ says Katy, a charity press officer from Wolverhampton.

Admittedly, some may think cajoling toddlers to watch programmes in Mandarin is the ultimate act of pushy parenting.

But Katy’s not alone. More and more mothers are turning the iPad’s access to foreign language cartoons to their advantage.

So have they stumbled on an ingenious fast-track to multilingualism, or is it merely another notch in the tiger mum’s belt?

‘Learning a language takes a lot of hard work and practice,’ she says. ‘While watching cartoons in conjunction with lots of other practice could be helpful, I would be hesitant to say it would make much difference.

‘Hearing a language is necessary, but not sufficient in itself. They’d need to have opportunities for communicating as well.’

But for families like Katy’s, where the parents don’t speak any other language, a cartoon can foster an interest in new languages. ‘It’s really important that children are exposed to a positive attitude to language learning,’ agrees Professor Graham. ‘So there will be a benefit in watching foreign cartoons — but it will be more long-term.’

Katy, who has worked as a tour guide in Europe, has always felt ashamed of her own limited language skills. ‘I see how my son is a parrot at this age, and that’s the best way for him to learn,’ she says. ‘He’s learning numbers and colours at the moment, and I don’t know if it will stick in French and Spanish, but I hope it does.’ 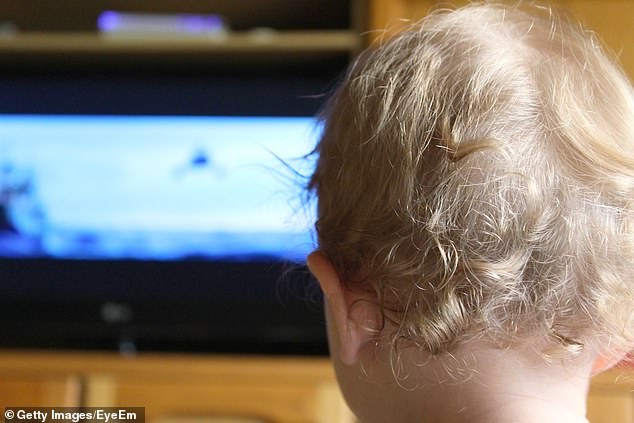 Lynne Callaghan, 39, a financial adviser, has been encouraging her daughters, Lily-Belle, ten, and Matilda, four, to watch Peppa Pig in Italian since a skiing trip in the Dolomites last year.

She got the idea of Italian Peppa Pig after seeing Italian children watching the English equivalent in the ski resort.

‘We’re going back to the same area this summer,’ says Lynne, from Omagh. ‘I thought if they watched Peppa Pig in Italian it might give them some understanding in time for our return.

‘The good thing about Peppa is that it teaches young children the basics of language.’

Some studies have shown that learning additional languages increases critical thinking skills, creativity and flexibility of the mind in young children.

That’s something Melinda Elena, a language teacher from London, is aware of. She encourages her children, Alice, 12, and Oscar, ten, to watch cartoons in Spanish and French. ‘I would say they’re bilingual now. I have no doubt the cartoons helped,’ she says.

Essentially though, Melinda’s main concern is giving her children confidence when it comes to language learning — something with which we tongue-tied Brits often struggle on foreign shores.