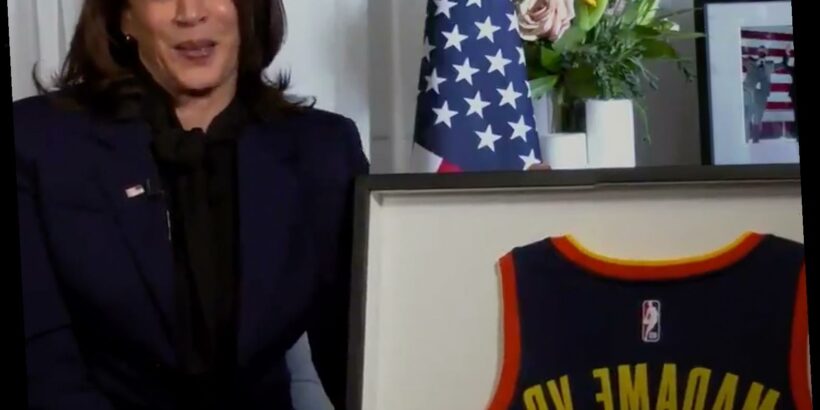 In honor of Harris' historic inauguration on Wednesday, the team, which was originally based in Oakland, California — the city where Harris was born — honored her by wearing special Oakland jerseys for their game against the San Antonio Spurs.

The Warriors also gave Harris a custom "Madame VP" jersey, complete with the number 49 on the back, a nod to the fact that she is now the 49th Vice President of the United States.

"I'm not saying you got to put this up in your office at the White House, but it probably would be a good idea," star Stephen Curry, who signed the jersey, joked in a video shared by the team.

"Congratulations," he added. "We're all rooting and supporting you the whole way."

"Oh, this means so much to me," Harris replied in the clip after receiving the thoughtful gift. "I will proudly, proudly display this in the office of the Vice President of the United States, an office I am about to occupy."

"I cannot thank you enough and you always bring such joy and pride to me, as a daughter of Oakland," she added. "Be well, be safe and this is really so very special. So thank you all and I hope to see you soon. Go Warriors!"

Earlier in the day, Curry also reflected on how much it meant to him and his family when Harris was sworn in on Wednesday — becoming the first woman, first Black person and first person of Asian descent to hold the office.

"Talk about a moment for my kids to see!" he wrote on Twitter.

The Warriors went on to defeat the Spurs 121-99. Wednesday's game marked the team's seventh Inauguration Day game. Their 6-1 record dates all the way back to 1949, when Harry Truman became the nation's 33rd president.