A clip from a new documentary about life aboard a Dutch submarine shows the point of view of a practice torpedo as it’s launched from the torpedo tube of a sub, including the torpedo surfacing for reuse:

One of the least visible aspects of naval warfare is the launch of a torpedo from a submarine. The nature of submarine warfare means nobody ever sees the torpedo tube mechanism and the torpedo ejected from its tube. After loading the torpedo and ordering the launch, the crew of the submarine is on the other side of a pressurized hull and unable to follow the chain of events.

Now you can know what it’s like to be shot out of a torpedo. (Hat tip to The Awesomer.) A documentary crew team filming aboard the submarine HNLMS Walrus attached a camera to a Mk. 48 practice torpedo and launched it from one of the sub’s four torpedo tubes.

The practice weapon, ejected by a pulse of compressed air, shoots out of the tube and then rises to the surface for recovery and reuse. 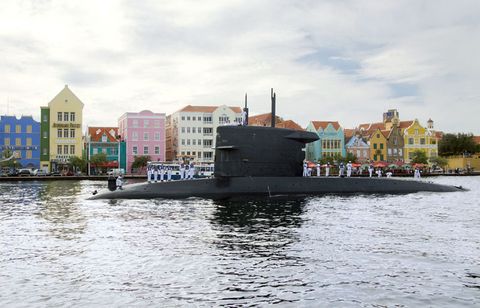 In a real-world shooting war, a regular U.S.-made Mk. 48 torpedo would launch and then be steered to its target via wires trailing from the torpedo back to the submarine.

The Mk. 48 is also capable of using its onboard sonar to detect and home in on enemy targets. Alternately, the torpedo can listen for the sound of enemy ships and then close in for the kill.