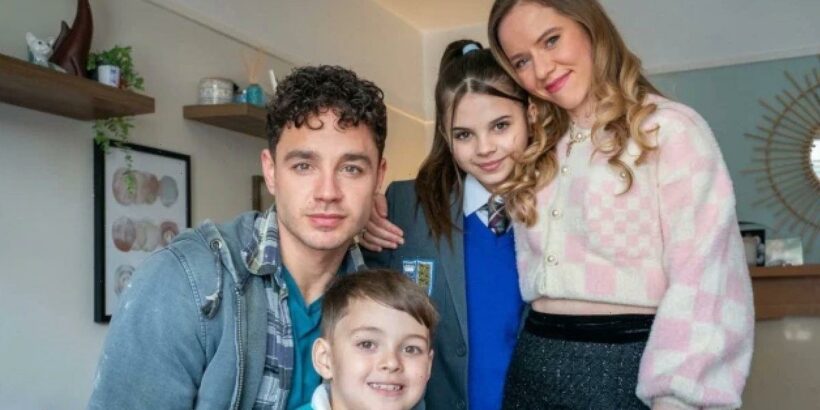 Waterloo Road is back! The hit BBC One drama series made a welcome return to TV screens on 3 January, with a reboot of the original show airing.

Original characters Donte Charles and Chlo Grainger, portrayed by Adam Thomas and Katie Griffiths, both returned, but now they're all grown up and have two children of their own.

Viewers were introduced to Izzie (Scarlett Thomas) and Tommy (Teddy Thomas) in the first episode of the new series, but in tragic scenes mum-of-two Chlo was killed off.

However, viewers were distracted by Adam's real life relation to Scarlett and Teddy. Let's take a look at their family connections…

He plays his son on the show which won't prove a difficult part to portray as Teddy, seven, is actually Adam's son in real life.

The ex-Emmerdale favourite, 34, is dad to Teddy and four year old daughter Elsie-Rose, with wife Caroline Thomas. The couple tied the knot back in 2017.

The family relations on Waterloo Road don't stop there however, as Adam is also related to his on-screen daughter Scarlett.

The 13 year old actress is the daughter of Adam's older brother Ryan Thomas, 38, and his ex-girlfriend Tina O'Brien, 39.

Ex-Coronation Street actor Ryan, who played Jason Grimshaw in the ITV soap until 2016, is also dad to Romeo, two, and baby daughter Lilah, with his fiancée, former The Only Way Is Essex star Lucy Mecklenburgh, 31.

The Thomas family are all super close and spend a lot of time together, so there's no doubt that Adam, Scarlett and Teddy's family roles in Waterloo Road came naturally to them.

Adam's twin brother Scott, 34, is also a famous face, having starred in season two of Love Island. He's also the director of The Social PR and co-founder of Food 4 Thoughts.

Dad-of-three Ryan shared his excitement over his daughter and nephew starring alongside his younger brother on Waterloo Road as the first episode aired.

Taking to Instagram, he wrote: "What a time to be alive. Waterloo Road, my little brother Adam, my little nephew Teddy and eldest daughter Scarlett take over the TV screen together as a family.

"Talk about a proud moment for the Thomases. I can't wait for you guys to see it. We watched it together as a family.

"It's beyond beautiful, so well shot," Ryan added proudly.

Waterloo Road, which is based in Rochdale, saw Chlo and Donte embark on an intense and dramatic love story during its first run.

While the pair were on-and-off at just 16 years old in the series, they ended up getting married. Soon after, Chlo gave birth to their daughter Izzie in the school toilets. The duo then left the show in season four and one storyline showed how they had decided to move in together to raise their child.

As the show moves forward throughout the rest of the series, fans will likely see the trials and tribulations of how Donte copes as a single parent, dealing with grief and trying to help Scarlett settle in at school after her loss.

Waterloo Road is available to stream on BBC iPlayer.