Spoilers for Wynonna Earp Season 3, Episode 6, "If We Make It Through December" Christmas came early this year for Earpers, along with tidings that Michelle Gibson (Megan Follows) had been touched by an angel — literally and figuratively. Yep, audiences finally learn about Waverly’s father on Wynonna Earp, and it’s a doozy. However, not everything in this episode screams Yuletide cheer — there’s still the matter that a demon Santa is killing children? Not to mention the fact that Doc (Tim Rozon) becomes a vampire? In other words, it’s just another holiday in Purgatory.

But first, the clothes: The ensembles in the episode are a complete delight, from Wynonna’s (Melanie Scrofano) holiday onesie all the way to Waverly’s (Dominique Provost-Chalkley) sexy outfit at the end. And then there’s Michelle’s bedazzled turtleneck that she wears while de-gutting a wild turkey ("Like I’m going to feed my girls store-bought."). But amidst all the holiday cheer, Waverly receives a truth bomb about her father. Fans will recall that in Episode 5, Bobo Del Rey (Michael Eklund) told Wynonna that Waverly’s father was an angel. The heir summons up the courage to tell her sister these tidings of great joy, which causes Waverly to have a holy freakout. 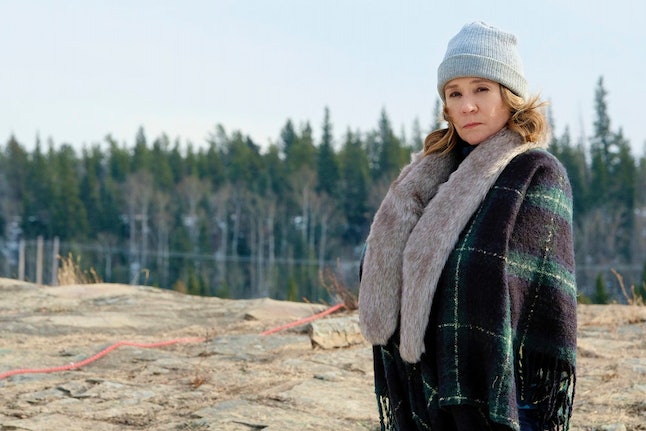 She comes panicking into the kitchen, where he mom still has her hands up the turkey. And when Waves asks her mother to please tell her about her father, Michelle reluctantly obliges. "We were in love, his name was Julian, and he was everything that Ward wasn’t," she recalls. "He was kind, honest, sober. Until he left without saying goodbye. Still, I don’t regret the affair — especially because, nine months later, I got my Waverly. You were born out of love, sweetie."

But when Waverly asks why she never tried to find him, Michelle responds that she had been just a tad busy with a certain demon that wouldn’t leave them alone (*cough* Jolene *cough*). So when the girls mention that maybe Bobo was lying about Julian being an angel, When Michelle asks, "Is that son of a b*tch still around? He was there the night you were born."

Hmmm, interesting. This obviously causes Waverly to go visit Bobo, who’s still trapped down a well. "You seem to think I’m an angel," she says as she points a rifle down at him. "Tell me about the night I was born." He wraps his arms around himself, because everything Bobo does is dramatic. "That was a happy day," he begins. "I was on a date when I heard screaming come from the Gibson greenhouse. It was Michelle! I knew when I saw you — when I heard your name — you were different. Michelle had lost a lot of blood. She passed out, and so I took you to him."

While he’s telling her this, audiences see a flashback to that day — first to a young Michelle holding Waverly, and then Bobo taking her to Ward, Wynonna’s father and the heir at the time. In true Earp fashion, he’s drinking at Shorty’s. "Get that thing away from me," he tells Bobo. "It’s not mine." However, Bobo proves very convincing and levitates Peacemaker out of Ward’s hand and into his own. "You will take this baby," he says, threateningly. "You will care for it. And if I find out you’ve hurt this angel, I will come for you. And I will kill you."

Audiences will recall that, before he became a revenant, Bobo had promised to take care of Waverly. So when he heard Michelle say her name, he knew instinctively to protect her. However, as Waverly points out, his presence was perhaps a bit too convenient. "You just coincidentally end up at the greenhouse the night my dad goes missing?" she asks. "Missing for some," the revenant responds, cryptically.

However, Waverly’s not the only one who pays Bobo a visit. At the tail-end of Episode 6, Michelle visits her old pal, too. "You shouldn’t have told Waverly those things," she tells him. Right after this, she throws down a rope, exchanging his freedom for Julian’s location. This means that he’s alive, Bobo knows where he is, and the revenant has been set loose on Purgatory once again.

So it may just be a matter of time before audiences meet Waverly’s angelic father face-to-face. Not to mention the fact that Waverly’s tampon angel — sorry, "menstru-angel" — has taken on a whole new meaning.