Wendy Williams tells Cynthia Bailey she should be fired from ‘RHOA’

“Wendy is dealing with some ongoing health issues and is undergoing further evaluations,” reads the latest post from @WendyShow on Instagram. “She will not be able to complete her promotional activities next week, but can’t wait to be back in her purple chair Monday, September 20th for the 13th season premiere.”

Fans and fellow celebs were seen wishing her well in the comment section, including fellow gossip hound Perez Hilton, who wrote, “Get Well Wendy ❤️.”

Sources tell Page Six that the show returned to the office this week and production has been preparing for their season premiere.

Williams, 57, has previously discussed several health issues on her daytime series, including her battle with Graves’ Disease, which caused the host to put her show on hiatus in spring 2020. 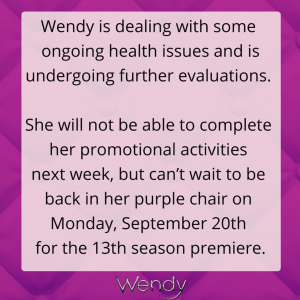 She also took a week off after first announcing her Graves’ Disease diagnosis — a condition that causes the immune system to attack the thyroid — in early 2018.

“My thyroid has been totally cattywampus,” Williams she told her live audience at the time. “I feel like there are birds swimming around my head … Constantly high. But not high,” she added.

“My doctor has prescribed — are you ready? Three weeks of vacation. I was pissed. Encore performances, really?”

She also fainted on live TV back in October 2017, blaming the incident on being overheated.