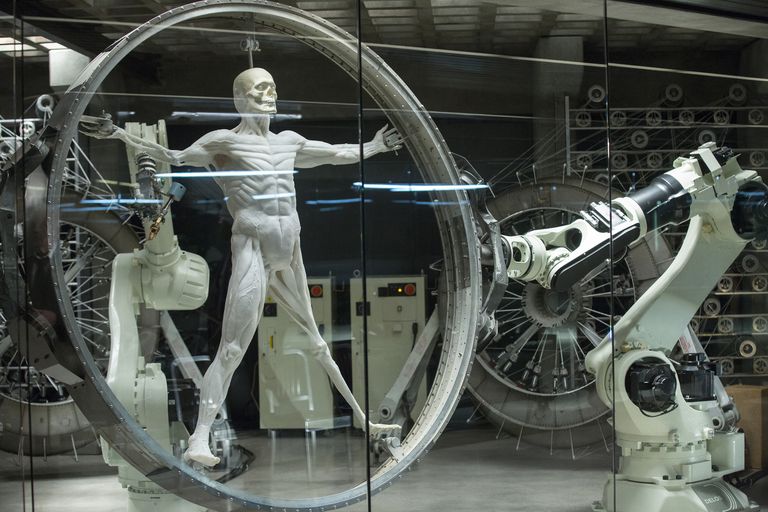 Westworld’s opening credits in the show’s first season were instantly iconic—a perfect, eerie summation of the show’s themes. But the series’ second season has made some changes to its opening title sequence, and they may give us clues about where the show’s plot will go from here.

The first season’s opening credits are a stark, black-and-white juxtaposition between images of the Wild West and the cold production of a laboratory. Amid scenes reminiscent of the wilderness, we see the building of a player piano, a host’s hands playing that piano, and then those host’s hands lifting off the keys, revealing they play themselves.

We also see the creation of a host horse, then later on, a fully dressed host riding that horse while holding a pistol. We also see an eyeball being created, and two hosts seemingly having sex. The final, iconic image inspired by the Vitruvian Man shows a host splayed inside a circle.

If you need a refresher, watch the Season 1 opening credits below.

In the second season’s opening credits, much is the same, but with a few telling tweaks. There is not only a host horse, but a host bull, which we see slowly charging toward the camera. We also see a pipette placing some sort of chemical material into a petri dish, and close-up shots of a host parent and baby in place of the host couple having sex. There’s also a long sequence of a machine brushing a host’s hair. Finally, we see the host bull charge through a glass wall, while a black hat falls through what looks like water.

It’s purposefully vague about what each new element represents, and HBO certainly isn’t giving anything away, but perhaps the parent and child references Maeve’s search for her daughter, and the black hat references the Man in Black?

Key elements remain the same, like the player piano and the host’s hands that initially play the music. “The player piano is a primitive form of robot, so we’re exploring the difference between animal and man and machine in very specific ways,” designer Patrick Clair told Vulture of his work on the first season in 2016. “The player at the piano is heartbreaking. It’s the bizarre nature of someone being created to be made redundant, and that is something we can all relate to, and the kind of thing that will provoke stories as it goes on.”

Another common element? The reference to Leonardo Da Vinci’s Vitruvian Man. In the second season’s credits, we get a closer look at that man, which may hint that the second season will center more on the hosts than on their human creators. “The Vitruvian Man, that goes back to Da Vinci’s anatomical drawings, and it gives the story an epic take on the formation of human beings,” Clair told Vulture. “One of the things that the show does well is the naked human body. It makes it strange and alienating, cold and mechanical, which makes us think about the body and the way people use it, or are used.”