The number of coronavirus cases linked to Victorian meatworks has more than doubled in a week, replicating trends overseas, where the industry has been a major source of infection.

The industry remains open despite the rising number of infections, with a meat union warning low-paid workers would be thrown out of work and meat supplies threatened by a shutdown. 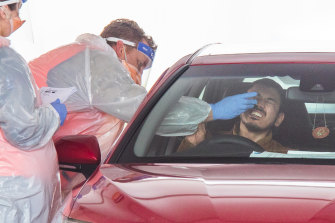 A worker from the Australian Lamb Co abattoir is tested for COVID-19 in Colac.Credit:Jason South

The number of infections at the four biggest meatworks rose by more than 200 in the week to Thursday, Department of Health and Human Services figures show. Meatworks have become a significant source of infection in regional centres and in the north and west of Melbourne.

Cases linked to Bertocchi in Thomastown have risen from 10 cases on July 23 to 134 on Friday. The other big outbreaks are at Somerville Retail Services and JBS in Melbourne’s west and the Australian Lamb Company in Colac.

There are a number of other meatworks with a small number of cases, while Inghams recently temporarily shut its North Melbourne plant and there was a major outbreak at Cedar Meats in May.

However, Australian Meat Industry Council chief executive Patrick Hutchinson, representing producers, has denied there are particular issues with the industry.

"There has been an overemphasis of cases being linked to the Australian meat industry," Mr Hutchinson said. "The virus is being transmitted in the community, not generated from within any particular industry."

The latest data from the state government indicates otherwise. The top four industrial outbreaks were all in the meat industry, even though it is a relatively small employer. There were far fewer cases in other blue-collar industries, including warehouses, manufacturing and construction.

Outbreaks in the meat industry have become a feature of the pandemic globally.

In the US, nearly 40,000 meatpacking workers have contracted COVID-19, while there have been major outbreaks in plants across Latin America and Europe.

The director of workers’ rights at the Australasian Centre for Corporate Responsibility, Katie Hepworth, said a coalition of international investors with $2.3 trillion in assets had been talking to meat producers about issues, including the pandemic and unsafe work practices.

"The reason these investors are getting involved is the scale of the pandemic," she said, adding that, by ensuring staff were safe they would ensure the security of meat supply.

Early this week, Premier Daniel Andrews said high-risk industries could be shut if coronavirus outbreaks continued to emerge and "we continue to see people attending work [while sick]”, but on Friday he said the industry was likely to stay open because it provided an essential service.

"One of the challenges we face is that many of the settings where we have seen significant outbreaks would on any given list mostly likely remain open," he said. 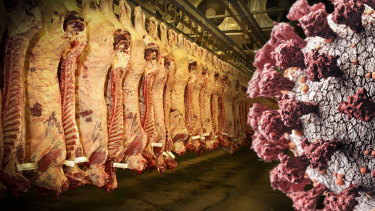 The meat industry is highly susceptible to COVID-19 outbreaks.Credit:Image by Jamie Brown

James Ritchie, assistant secretary of the IUF, a peak body for international food unions, said the industry was labour-intensive and based on classic Fordist production methods, involving fixed work stations that were close together, which was contributing to the virus spread.

"It’s dirty, it's dangerous and it's really hard work," he said. "You stand on the assembly line every day and you stand in very close proximity to other workers on the line and across from you."

"You get those lines going as fast as you can and you work the workers as hard as you can. With the line speeds going so fast, workers have to be close to each other to complete the work."

Mr Ritchie said there were other issues, too, including often poor ventilation, cold temperatures within plants, a lack of protective equipment and overcrowded lunch areas. Temporary migrant workers typically make up a large sector of the workforce, including in Australia, and some of them may live together in crowded accommodation.

"They just want to keep their head down," he said.

Australian Meat Industry Employees Union state secretary Paul Conway has warned against any move to shut the industry saying it "is vital to Australia." He said working too far apart would make many businesses "completely non-viable".

"In the meat industry it is very difficult to socially distance on the production side of things. Packing areas are difficult, the boning rooms and kill floors are going to be difficult."

In Victoria, parts of the industry are unionised while other parts have few or no union members, Mr Conway said, with those employers much more likely to use labour hire and temporary migrant labour. 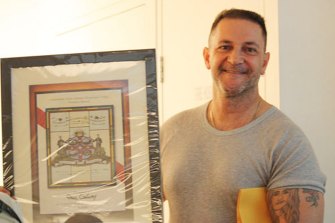 There have been outbreaks across union and non-union sites in the state.

The fastest growing outbreak is at Bertocchi, which Mr Conway said was largely a non-union site and did not employ workers directly, but relied on labour hire and a migrant workforce. Bertocchi chief executive Peter Paolino did not respond to a request for comment.

With the Morrison government considering a union push for paid pandemic leave, in Germany the government has announced it would go much further.

Mr Ritchie said the German government had announced it would ban contracting and indirect employment in the meat industry, although the laws were yet to pass the Bundestag. 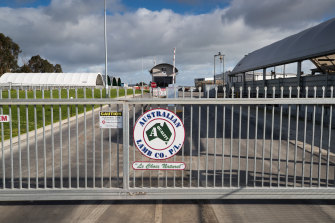 An outbreak at Don KR in Castlemaine has resulted in 1300 workers going into isolation while they are tested. By Thursday about 12 cases had been connected to the meatworks. But
Mount Alexander Shire mayor Christine Henderson said she expected that number would increase.

"We’re in a state of caution and vigilance," she said.

Do you know more? Send us a confidential and encrypted message on Journotips or to [email protected]