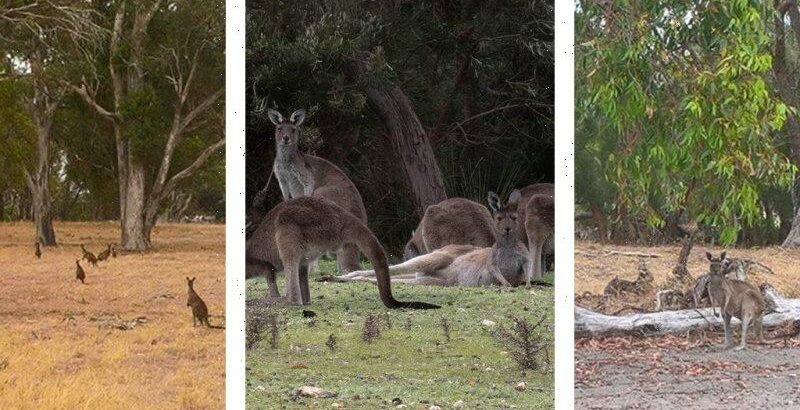 Virtually all kangaroos moved from a Baldivis development site in an effort to avoid shooting them have ended up dying from stress.

The rapid expansion of the suburb in Perth’s sprawling south pushed out the once-rural area’s western grey kangaroo population.

A trial will be undertaken to translocate a few kangaroos in the City of Canning to private properties.Credit:Aaron Van Rongen

By 2019, 206 ’roos, including 52 joeys still in pouches, were boxed in to a 71-hectare future housing estate. The property developer wanted to cull, the community members protested.

In the end the state paid some $220,000 of taxpayer money to the developer to move the western greys instead of a much cheaper cull.

But 63 adult kangaroos and 20 pouched young died or had to be euthanised even before release in a forest some 50 kilometres away, studies of the program now reveal.

By day 18 post-release, more than 80 per cent were predicted not to have survived. And only 11 were believed to be alive a year after release.

The death rate was much higher than previous studies of translocation programs in other states for similar species and an academic paper by the Department of Biodiversity, Conservation and Attractions, which monitored the Baldivis situation, suggested the high mortality rate so soon after relocation was primarily related to stress from capture.

Western greys are susceptible to a disease known as capture myopathy — which can result in paralysis and heart failure which is brought on by the stress of being captured, moved or sedated — that can be fatal immediately or even a month or more later.

The Baldivis kangaroos were herded with all-terrain vehicles and by people on foot into a 4-hectare enclosure and then in smaller groups to a 25-square-metre area for sedation.

The whole process went for three weeks, but the remaining kangaroos were released by members of the public on four occasions, including times where it appeared a car had been used to knock down fencing, meaning many had to be captured multiple times, adding to their stress.

The consultant used by the developer was Terrestrial Ecosystems and its principal zoologist Dr Graham Thompson said the kangaroos should have been euthanised at the start.

“Our recommendation was initially that the animals need to be euthanised because they were stressed,” he said.

“You couldn’t get within 80 metres of the ’roos and they were gone.”

Thompson said the program should have been stopped because it was obvious the animals were not doing well.

The developer’s managing director Bruce Young said the government had been told there could be a high death rate and it was only because of social media it had stepped in.

“What we hope comes out of it is a bit of realisation from the government; what I suspect will happen is not very much at all,” he said.

Both men said more planning had to take place at a state strategic level, so kangaroos were not getting trapped by urban sprawl in the first place.

Whitby, who is now the state’s environment minister, stood by his push at the time for alternative options to culling.

“It was incredibly disappointing for our community to see kangaroos perish due to the stress of capture myopathy,” he said.

“However, the process had important legacies. It reinforced the importance of a more strategic and early approach to managing the impact of development on kangaroos, including the importance of leaving bush so kangaroos can move safely away without being trapped by suburbia.

“The protection of kangaroos and all our native fauna is a priority of the McGowan government and carefully managing development is critical.”

Prime habitat or prime real estate? Canning is next battlefront

Similar situations are happening all over Perth.

With lots of feed and water and no predators, kangaroo numbers can grow rapidly.

Another potential cull in the City of Canning sparked a backlash in November.

There are about 300 western greys estimated to live at a 67-hectare landfill and Bush Forever site which also neighbours bushland managed by the City of Melville and Jandakot Airport.

About six hectares has been sold off to the state government for a Metronet project, some could eventually be turned into a sport facility and another part, including habitat for honey possums and black cockatoos, could be further fragmented by a new road.

An environmental assessment suggested the land was overpopulated by the kangaroos and there was grazing pressure on vegetation which could be relieved through a management plan that could benefit quenda and threatened western brush wallabies there.

Culling is off the table for now, however, after the council recently voted to undertake a trial where up to eight kangaroos were moved from the Canning Vale Waste Transfer Station to privately owned land.

Canning councillor Amanda Spencer-Teo spearheaded the move and said there were plenty of examples of successful translocation but there just had not been studies published about them.

She said flaws with the Baldivis translocation should not equal an excuse to cull kangaroos.

“People say the western greys are a pest and breed too quickly. We were saying that about koalas a few years ago,” she said

“If we had done something years ago we wouldn’t be in this situation and also this is Canning’s biggest land parcel of bush area. This is the last of the kangaroos we have basically in Canning all together.

“Ultimately I’d love to keep them there and turn it into a bit of an attraction but it’s now considered prime real estate.”