Ever heard of the Companions and Pets Party? The Health Australia Party? Or even the New Democrats? You may need to soon.

A leaked video of so-called “preference whisperer” Glenn Druery has again highlighted Victoria’s party-led group voting system means unknown minor parties could have a big say in Victoria’s upper house, the Legislative Council, for the next four years. As the government is likely to be forced to rely on an upper house crossbench, this may give them a significant say in legislation. 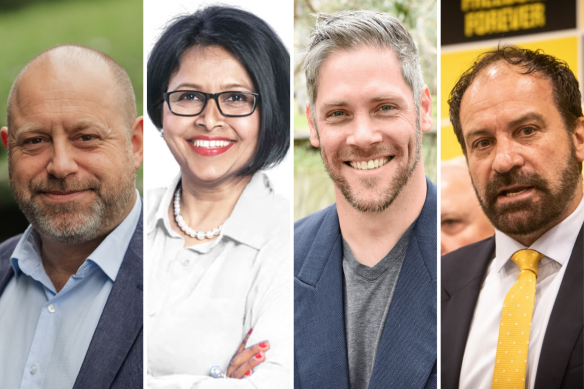 So who are these unknown candidates? And what do they stand for?

The Age has complied a cheat sheet of all the minor parties running across Victoria’s eight upper house districts. 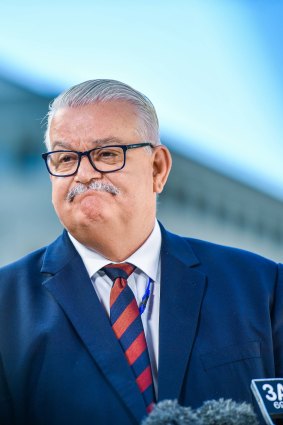 A micro-party established ahead of the last election, Transport Matters was founded by taxi industry members in response to Uber’s incursion into the local market and its subsequent deregulation.

Rob Barton was elected to Victoria’s upper house in 2018 with just 0.6 per cent of the Eastern Metropolitan region primary vote. Notably, he was the final vote the Andrews government secured to pass its pandemic bill, with amendments, last year.

Transport Matters’ website also lists broader transport policies, such as extending Melbourne’s free tram zone, and homelessness as some of its priorities.

The New Democrats was founded by ex-Labor upper house MP Kaushaliya Vaghela last month. Veghela quit Labor after voting for dumped Labor powerbroker Adem Somyurek’s motion to have the ombudsman re-investigate the red shirts scandal. She has also raised allegations of bullying against Premier Daniel Andrews, but WorkSafe closed its investigation last month without any adverse findings against the premier. Vaghela is running in the Western Metropolitan region and the party has candidates, largely from the Indian community, across all eight upper house regions.

The Clive Palmer-backed populist party named controversial former Liberal MP Geoff Shaw as its Victorian leader last month. Shaw will run in the Northern Victoria region and is most remembered in Victorian politics for causing headaches for the former Coalition government after being investigated by the ombudsman and police for allegedly using his taxpayer-funded parliamentary car for his hardware supplies business. Police later dropped 23 charges against him.

The Freedom Party is also running on a strong anti-lockdown, anti-vaccine mandate and anti-Daniel Andrews platform. Its state leader, Morgan Jonas, is running for the Legislative Council in the South-Eastern Metropolitan region, while deputy leader Aidan McLindon is running for Daniel Andrews’ lower house seat in Mulgrave. In response to the Drurey videos, the party’s leaders on Friday called for the election to be “postponed and for the state government to go into administration pending an independent inquiry given the election can no longer be deemed valid”.

The libertarian party already has two members in Victoria’s upper house: David Limbrick and Tim Quilty. The party has been critical of COVID-19 vaccine mandates and Victoria’s lockdowns, and advocates for free market economics. It also wants to remove penalties for “victimless crimes” such as cannabis possession and vaping, according to its website.

The socially conservative party was reborn last year and former Australian Christian Lobby boss Lyle Shelton – a leading voice for the “No” campaign in the 2016 same-sex marriage plebiscite – is its national director. Lee Jones, who is running in the South-Eastern Metropolitan region, is its lead candidate. It wants to repeal laws introduced by the Andrews government to ban gay conversion therapy, is concerned about gender transitions for children, and wants greater religious freedom.

After putting three members into Victoria’s upper house at the last state poll (one was quickly disendorsed after threatening to quit following an unsuccessful leadership bid and sat as an independent) Derryn Hinch’s Justice Party is again contesting the election. This time, the former shock jock the party is named after is running in the Southern Metropolitan region. The party advocates for stricter bail, parole and sentencing and Hinch also called for the state’s anti-corruption watchdog to be given greater powers. 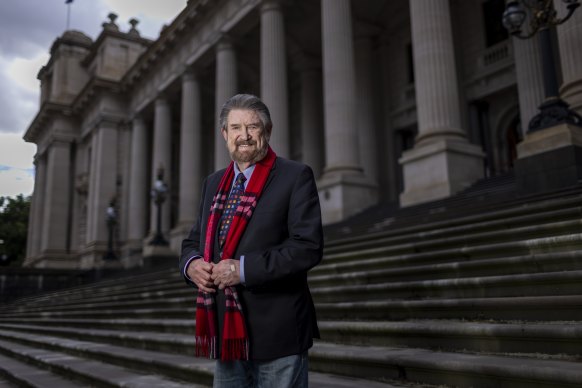 If successful, Derryn Hinch, 78, will become the oldest member elected to the Victorian parliamentCredit:Wayne Taylor

Running under the slogan of “Freedom. Prosperity. Health”, the party wants to repeal “No Jab, No Play” legislation which its says “discriminates against unvaccinated children for no good medical reason”; launch a review of the state’s COVID-19 management; and aims to “change the pharmaceutically dominated health system in Victoria”.

The Companions and Pets (CAP) Party opposes animal rights activists and says it wants to protect pet ownership and animal-based farming. Party chair John Hutchinson is a veteran dog breeder – writing two books about the bichon frise breed – and is running in the Eastern Victoria region. 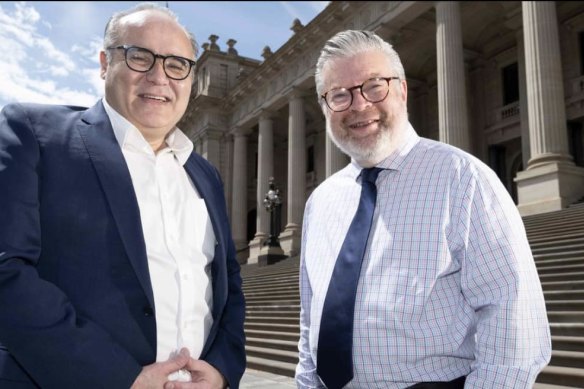 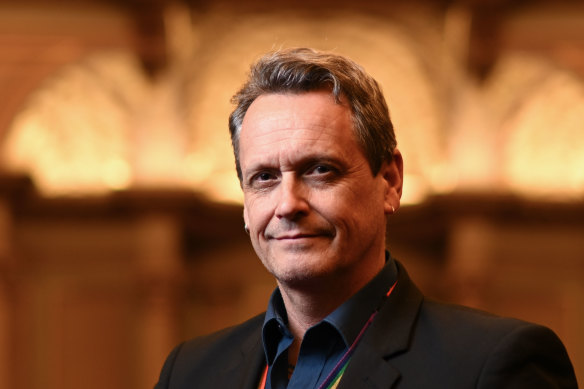 As suggested by the title, the Shooters, Fishers & Farmers party says in its Victorian policy document that it aims to “fight the animal rights agenda in Parliament”.

It opposes a ban on duck hunting and wants to improve regional infrastructure. Jeff Bourman has represented the Eastern Victoria district since 2014 under the party’s banner.

An offshoot of the Australian Values Party, the Angry Victorians Party website says its main priorities are: “mental health, small and family businesses and our veteran community”.

It was this party that leaked footage showing “preference whisperer” Druery bragging about exploiting group voting tickets to elect candidates with little support.

Patten, the party’s leader, has been an upper house MP since 2014 and has been one of Victoria’s leading social reformers, championing the state’s safe-injecting room, voluntary assisted dying laws, safe access zones around abortion clinics and decriminalising sex work. The party also advocates for other progressive causes, such as greater emission reduction targets. 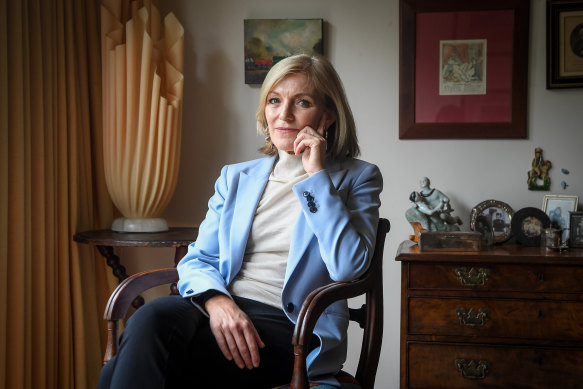 The party’s website says it “intends to do what it says on the tin”. In a leaked video, “preference whisperer” Druery said this party was “one of [his]” and was created to draw anti-Andrews government voters so he could direct their preference flows to other minor candidates he was working with to get elected.

As it says in the name, this single-issue party wants to legalise cannabis for recreational use in Victoria.

Another party that has centred its campaign on opposition to Premier Daniel Andrews. One Nation’s Eastern Victoria candidate Warren Pickering said in a statement the party wants greater government transparency, a royal commission into the state’s COVID-19 response and more fossil fuel reserves utilised for energy.

The left-wing party advocates for greater equality, social justice and environmental sustainability. Its policies include a five-year freeze on rent increases, reducing politicians’ salaries and creating a net-zero emission Victoria economy by 2035.

The Sustainable Australia Party has three priorities, according to its website: environmental protection, stopping overdevelopment and tackling corruption. It has been represented in Victoria’s upper house by Clifford Hayes for the last four years, who has advocated for planning and political donation reform.

This grouping, which only appears in the Western Metropolitan region, is a combination of independents who have teamed up to be able to gain a more electable spot above the line on the upper house ticket. Lead candidate Walter Villagonzalo is a former deputy mayor of Wyndham City Council and his campaign website emphasises developing Melbourne’s western suburbs.

Fred Ackerman is the lead candidate for the similar independent grouping, which also only appears in the Western Metropolitan region. Ackerman, previously a long-time Liberal member, lost preselection for the major party’s upper house ticket in the region to Moria Deeming, who opposes abortion and trans rights.