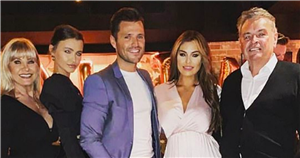 While the world is familiar with most of the Wright family thanks to TOWIE, less is known about the family's youngest daughter Natalya.

When her siblings became household names on the ITV2 reality show, Natalya Wright hadn’t started secondary school, meaning that she stayed behind the scenes.

Fast forward ten years and the now 20-year-old is making her mark on the fashion world after previously being signed by a major modelling agency.

Natalya was initially represented by Select models who have also been behind the likes of David Gandy and Daisy Lowe.

The agency touted their signing as the ‘Kendall Jenner’ of the Wright family, snapping her up when she was just 16.

Kirsty Reilly, the head of special Bookings at Select who signed Natalya, told The Sun Online at the time: “Natalya is the Kendall of the Wright family, and we have huge plans for her.

“Big fashion brands are already asking for her. We are super excited to be working with her.”

In fact, the teen credits herself as a ‘Fashion Model & Lifestyle influencer’ on social media, where she has 297k followers and counting.

She parted ways in Select and signed with Flourish management, who oversee the careers of influencers including Wayne Lineker's daughter, Tia Lineker.

Natalya has a boyfriend called Tommy, who she has credited as “her world” on social media.

Natalya and Tommy recently joined Mark and Michelle on the Wright family’s holiday to Portugal, where she posted a series of sun-drenched photos.

Natalya has no plans to follow her famous siblings onto our screens and has previously said that reality TV “is not for me”.

Speaking to OK! she said: “I was only ten when they started! We didn’t really think much of it initially and just found it funny, but gradually the older girls at school would ask me for pictures of Mark.

“I’m really shy, so I found it a bit embarrassing but no one was ever mean to me about it.”

The family also have a second son, called Josh, who is a semi-professional footballer.