Moments from the Cat Empire’s final show at Bluesfest.

Three metres high above the Byron Bay mud, side stage is chaos. Not just dark and loud but confused by shifting shards of light and shadow thrown from spotlights and flittering silhouettes.

Voices check microphones, horns play frantic scales over a cacophony of anticipation from the Bluesfest crowd heaving below. Musicians, crew and families bristling with small children morph into group photos, hugging and laughing and shouting in ears as technicians scramble.

Frontman Felix Riebl is most animated, leaping and stretching like a prizefighter. Ollie McGill is the least fazed. Oblivious to the crashing tides of emotion, he’s walked straight on stage to warm up at the piano and has to be called back for the last pre-show photo. 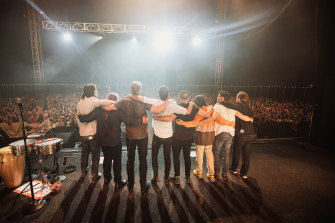 The Cat Empire take a final bow at Bluesfest.Credit:Dara Munnis

Suddenly, there’s just eight guys and the rest of us. They huddle close as Riebl, always the leader, shouts who-knows-what instruction or encouragement. It’s intense, probably informed as much by adrenaline as anything that needs be said. After 20 years, everyone knows their places. Now, kaboom, off they run to find them. The roar hits the red. The lights fan up and the last ever Cat Empire show begins.

Last ever? Sort of. Riebl and McGill have shows booked in the US in October, with a new Cat Empire line-up TBA, including horn players Ross Irwin and Kieran Conrau. But anyone who has followed the world-conquering journey of this remarkable band knows it can never be the same. Then again, it hasn’t been the same for some time.

Rewind four hours. Jamshid Khadiwala, turntablist DJ Jumps, is in the back of a 12-seater van hurtling down the rainy Pacific Highway, one of several vehicles carrying the vast Empire entourage from Gold Coast hotel to Bluesfest site.

“We’ve been talking for years about a certain ending,” he says. “We wanted to do a big world tour and that was going to be the farewell… It’s hugely disappointing that we couldn’t do it. Disappointing for us, the agents we’ve worked with all over the world, but no one more than the fans. We all deserve that, and it makes me sad that we haven’t been able to deliver.” 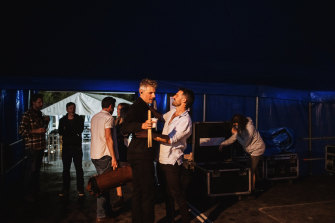 Of the six original members, Jumps is the guy who wears his emotions closest to the surface. This band has been “everything, really; my whole life,” he says. He was “a f—ing wreck” after the last show with bassist Ryan Munro, who bowed out in March 2020 due to travel-related anxiety: one of countless pandemic blows.

But the vote to split was unanimous, right?

“No, no, it wasn’t like that at all,” he says. “It was just people deciding individually. And obviously, certain things set other things in motion. I can’t speak for everyone else. But I wouldn’t have thought about it if certain people hadn’t said, ‘I think it’s time for me to peace out’.”

Prominent among them would be Harry Angus. The band’s trumpet player and second singer has always been a towering presence, a formidable musician and songwriter, a sardonic foil to Riebl’s open-armed ringmaster. The fans adore him. Those who know his many solo projects have also noticed his gradual fade from the Empire spotlight.

Backstage in the Bluesfest headliners’ green room, he’s surrounded by his wife, singer Emily Lubitz, and three young sons. Drummer Will Hull-Brown is drumming on his lap as his wife wrangles four more boys, including twins. McGill’s third daughter is a babe in arms. Riebl’s two kids are off-site. Karen the bookkeeper has flown in from Glasgow; former label head Chris from America.

“A big reason driving my decision [to leave] is I’m a bit superstitious about inspiration,” Angus says, grinning the grin of a man permanently amused by the vicissitudes of life. “I did feel like maybe a few years ago, I wasn’t getting that anymore but I thought, ‘Don’t give up your day job’… But then when the time felt natural, I think I was emotionally very prepared.”

Is everyone happy about Riebl and McGill continuing without them?

“You know, to be completely honest, when we started the process of disbanding, I think everyone felt really kindly towards each other. And then as the details become more apparent—” that grin again “—there’s been a bit more conflict and argy-bargy. 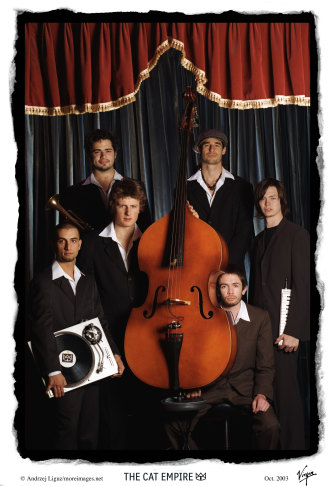 Just before showtime, the band comes together for the first time in a tender ceremony to honour manager Correne Wilkie. Her guidance and stamina in steering this fiercely independent operation — equal attention to worldwide licensing minutiae and travel arrangements for half a dozen families — can’t be overstated. 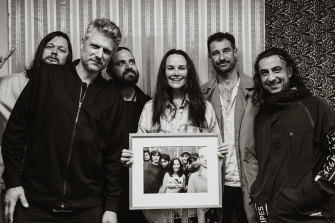 Hull-Brown, “the heart of the band,” as Riebl will introduce him on stage, leads the presentation of a framed black-and-white photograph from their early days. They all look like children themselves, eyes alight at the start of an incredible adventure that ends here. It’s hugely significant that Wilkie, after two consuming decades, has also opted out of the next Imperial phase. There are some tears. But mostly laughter.

“Walking in five!” shouts a road manager named Hoss. The rain has let up. In groups of twos and threes and more, carrying horns and cameras and children, the long entourage begins the muddy trek to the stage.

Fans have flown in from around the world for this. Leo’s first gig was in Edinburgh 17 years ago with his mate Jasper. He’s seen the Cat Empire in six cities. Tonight, they’ve travelled from San Francisco. “This Canadian is coming from Stockholm,” one Instagrammer posts. “We are coming for our honeymoon!” says another from the UK.

Despite the challenges of jamming 20 years into 90 minutes, it’s unlikely anyone is disappointed. Riebl has loaded the setlist with more Harry songs than usual but crowd-pleasing is the key, beginning with the jubilant manifesto of How To Explain (“music is the language of us all”) and climaxing with the Hottest 100 smash of ’03, Hello. 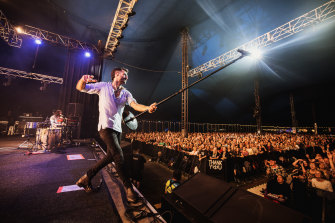 Daggers Drawn might be the musical highlight: an Angus epic that loops in solo flights from most members of the band. “OK so we’re a party band, dance band, world music, whatever,” Hull-Brown reflects later. “One thing I’m proud of is the fact that we sort of tricked people into listening to jazz. in the middle section of a song, we don’t know what’s going to happen.”

We do know that the show will end with the swinging ska euphoria of Chariot. First, the emotional frontman has many people to thank on behalf of his “band of brothers”, so the midnight curfew comes and goes. “How long does this song go for?” a Bluesfest wrangler shouts at Andie, the band’s stage manager of 16 years. “Between seven and fourteen minutes,” he replies. 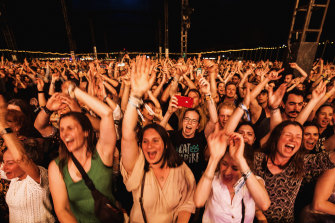 The final bows are an encore unto themselves. Side stage, there are more tears, more hugs and photos, and much more tired children. As stragglers file off into the mud, Angus makes a late return. How was it for him?

“Fun. Just another show,” he grins. “It just happened to be the last one.” He heads back to the empty stage. “I left my trumpet behind.”

There is no official after-party. Emotions are likely to be too broadly mixed, Wilkie confided earlier, and sure enough, back at the hotel, most of us quietly disappear. Ollie McGill is the only original member to answer bassist Yuri Pavlinov’s WhatsApp party call around 2am.

“That was one of my favourite gigs we’ve done in a long time,” the piano player says over a blaring Beach Boys playlist in room 6206. “It was loose, but all the bits were there. I felt like I could really play tonight. Everyone was on fire…” 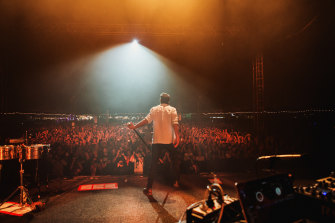 Bluesfest was the final gig for the current iteration of the Cat Empire.Credit:Dana Munis

In some ways, McGill is the band’s purest musician; the guy who just lives to play. He’s recently taken, in his downtime, to playing in wedding bands around his new home in the NSW southern highlands.

Childhood friends, McGill and Riebl were playing together long before the Cat Empire. “We’re really starting to find our feet moving forward, which is exciting,” he says. “It was very worrying there for a while when we didn’t have a lot of foundation. It felt like the carpet had been ripped out from under our feet. But I’m confident. Yeah. It’s gonna work.”

It’s a few days before I catch up with Riebl, walking through the Bluesfest gates with his partner Eloise, his son sloshing in gumboots and his daughter on his back. There’s a subtext to our conversation. Something about those hurt feelings others have mentioned, and the sadness that comes with all that happiness.

But after 20 years of crossing paths like this, there’s also an unspoken understanding about how people grow, how children change lives, how creative paths evolve and diverge. Ever since the Beatles split, people have wanted to gossip about the grievances that made it end, while the real story is the love that made it last.

“Look, we started off as a band of teenagers,” Riebl says. “You know, talented musicians, but fairly happy-go-lucky guys who wanted to see where it went. None of us expected it to go where it did.

“To have made it this far, to have made that many albums and to have more-or-less the same team getting to this 20-year point … that took an enormous amount of commitment, at times sacrifice, at times real grit, and at times sheer joy, which is the thing to remember because the crowd shared that with us.”

He recalls a story he told us two nights ago, of being a teenager looking up at the Bluesfest stage and dreaming that one day, just once, he’d like to play up there. That one came true, half a dozen times. Now, he says, “I’ve started dreaming about what else might be possible.”

To read more from Spectrum, visit our page here.