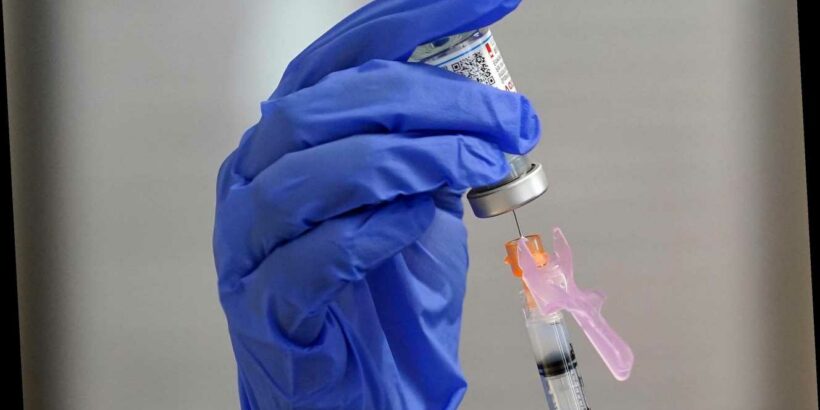 Oak Valley Hospital District is offering its employees a $300 bonus to get vaccinated. The independent hospital in Oakdale, California, decided to implement a financial incentive after only 40% of its 600 employees initially turned up to get the shot. Since offering money to those who get the second dose of the vaccine, the hospital has reported a noticeable increase in the number of workers getting vaccinated.

The approval of COVID-19 vaccines may represent a huge stride in the battle against a virus that has killed more than 437,000 people in the U.S., but to work effectively to bring the pandemic under control means getting a large proportion of the population to take it. The logistics of conducting widespread vaccinations are staggering, and to make the challenge greater, many people are hesitant to take the vaccines — including the health care workers first in line to get them.

Much of the brunt of the coronavirus crisis has fallen on the shoulders of already thinly stretched and overworked health care workers. Nearly 3,000 health care workers died of COVID-19 in the U.S. last year, according to an analysis from Kaiser Health News and The Guardian, with 65% of those workers being people of color.

Many more health care workers have been sickened by the disease or been forced to quarantine due to virus exposure, taking them offline and exacerbating the existing shortages of available health care workers. This crisis within a crisis has hampered America’s ability to effectively deal with the pandemic.

Since health care workers are a uniquely exposed and vulnerable population who have experienced firsthand the devastation wrought by COVID-19, it was widely hoped that once a safe vaccine was made available, they would quickly accept inoculation en masse. Unfortunately, that doesn’t seem to be the case right now.

Many health care systems have seen widespread reluctance among workers to get vaccinated. According to Ohio Gov. Mike DeWine, 60% of his state’s nursing home workers declined the vaccine. In some health care settings, as many as 80% of workers have turned down the vaccine, according to an AP report. Although some vaccine hesitancy among health care workers was expected, the large numbers unsettle many experts in the field.

“We’re all a bit surprised by the magnitude of the number of people that have not wanted to be vaccinated,” said Dr. Georges Benjamin, executive director of the American Public Health Association. “Particularly in the fact that this is, at least on the hospital side of it, a highly trained, educated workforce.” 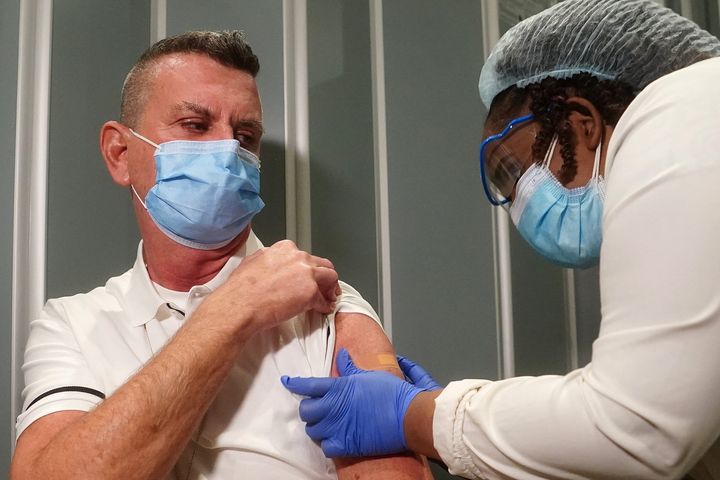 According to Dr. Anthony Fauci, the nation’s leading infectious diseases expert,  we would need to vaccinate between 70% and 90% of the entire U.S. population to achieve herd immunity and have life return to some kind of normal.

Health care workers are the tip of the spear in this effort. By inoculating health care workers, not only is a key at-risk group protected, but by staying healthy they can continue to provide critical health services to the sick. It’s also very important from a messaging standpoint; health care workers are trusted within their communities, and once vaccinated they can model the safety and efficacy of the new vaccines to a wary public. Likewise, a failure to get full vaccine compliance from health care workers could reinforce public vaccine skepticism and would represent a considerable setback for the national effort to curb the pandemic.

Health care providers are strategizing how best to confront this challenging phenomenon among their employees, and many are exploring new ways to encourage or enforce vaccine compliance.

Money, like the bonus offered by Oak Valley Hospital District, is one obvious incentive. Echoing moves from businesses such as Trader Joe’s, Dollar General and Instacart, which are giving employees cash and time off to get the vaccine, there is a fledgling effort within the health care industry to provide financial incentives in exchange for vaccination.

Houston Methodist, a large Texas hospital group that employs over 26,000 people, is planning to give a $500 “hope bonus” as part of a wider incentive program it’s been offering, one that included an earlier $500 bonus made available this past fall. But to receive the new bonus, staff will need to get vaccinated.

“We said to our staff when we get to around the one-year anniversary, sometime in March, there’s $500 there for every staff member again,” said Dr. Marc Boom, CEO of Houston Methodist. “But this time, we’re going to ask that you get vaccinated in order to qualify for that. And we did that because we see it as our sacred obligation to care for our patients and to keep them safe.”

Concrete data on the effectiveness of incentive programs is generally sparse, but some experts see incentives as a promising tool to increase buy-in among workers who may be on the fence or indifferent to getting vaccinated. Ellen Magenheim, a professor of economics at Swarthmore College who has researched the issue of incentives for vaccines, said that incentives could help nudge health care workers into compliance by making vaccination more explicitly appealing.

“Part of what’s hard about getting people to get vaccinated is you’re asking them to incur a cost now, the cost is their time and their discomfort, for a future payoff,” said Magenheim. “And in the case of vaccinations, the payoff is really intangible, so offering an incentive to get a vaccination is a way to make the benefits more tangible right now.”

However, there is concern that paying people to get vaccinated could backfire and reinforce distrust in those already skeptical of the vaccine.

“I would not recommend using individual-level financial incentives for this vaccine,” Dr. Alison Buttenheim, scientific director of the University of Pennsylvania’s Center for Health Incentives and Behavioral Economics, said via email. “One reason is when you offer an incentive for a behavior, you may signal that the behavior is difficult, risky, or unpleasant. We don’t want to do that with this vaccine.”

An alternative to incentives is the more draconian approach of mandating vaccination as a condition of employment. Many health care providers already mandate flu vaccination for employees on the basis that it’s incumbent on an employer to provide a safe work environment. The same logic could apply equally to the COVID-19 vaccine. Houston Methodist is considering a mandate for COVID-19 vaccination if incentives and other measures don’t achieve full compliance.

Atria Senior Living, a Louisville, Kentucky-based senior living provider has already implemented a mandate requiring full vaccination for its 10,000 employees by May 1.

Mandating vaccines does have the potential for blowback, however. The outcry over mask mandates shows there’s a possibility that a vaccine mandate could produce a similar backlash. Further, many CEOs might be reluctant to institute a mandate that could cause workers to quit and further exacerbate severe staffing shortages of health care workers.

The root causes of people’s reluctance to get vaccinated are complex and highly individual. “Vaccine hesitancy always comes in many flavors, and this vaccine is no different,” Buttenheim said. She pointed to specific concerns around the COVID-19 vaccines, including the perceived speed with which they were developed and the politicization of the approval process. “But a deeper, harder source of hesitancy,” she added, “is the justified distrust among Black and Brown and Native communities given a long history of medical mistreatment and exploitation.”

People of color, who have been particularly hard hit by the pandemic, make up a disproportionate share of health care workers. Vaccine hesitancy remains relatively strong in communities of color. According to a recent Kaiser Family Foundation poll, 35% of Black adults say they would definitely not or probably not get vaccinated.

This distrust tracks with long-standing racial discrimination in the health care system, as well as past criminal mistreatment of Black people by the white medical establishment. In the 19th century, enslaved people were at times forced to submit to horrific medical experiments, a practice that shamefully survived the Civil War. In the U.S. government’s Tuskegee experiment, Black men were infamously used as unknowing participants in cruel syphilis trials that went on for four decades.

For Benjamin and other experts in the field, the most effective way to counter vaccine hesitancy, especially in minority groups, is not through incentives or mandates but through education and the use of targeted messaging.

“One of the things that we know about hesitancy is that you can’t paint everybody with a broad brush,” said Benjamin. “You’ve got to ask people what their concerns are and then you need to address those concerns directly. If you do that, using a trusted messenger, people are much more likely to take the vaccine.”

Boom at Houston Methodist thinks that incentives have helped encourage vaccine compliance among the hospital group’s employees, but it’s unclear how many other hospitals or health care providers might follow suit. We’re still in the early days of the vaccine rollout, and many employers may be taking a wait-and-see approach. Challenged by declining revenues, hospitals in particular could balk at implementing potentially expensive incentive programs.

However, the Centers for Disease Control and Prevention recently warned that more transmissible mutations of the virus are now circulating, placing new burdens on health care systems, and that “mitigation measures and vaccination are crucial to reduce the number of new cases and deaths substantially in the coming months.” A fully vaccinated health care force would be a vital part of containing such new surges, a situation that might push employers toward incentives as an alternative to unpopular mandates.

For some who study the issue of vaccine compliance and public health, like Robert Gatter, a law professor at St. Louis University, achieving nearly full buy-in on the vaccine, both among health care workers and the population at large, will require a targeted approach and a large degree of finesse.

“When I teach public health law, the first principle is that the larger the public health problem, the more certain it is that you will need the public’s cooperation in order to resolve it,” said Gatter. “What you’re looking for is the tool that’s in the sweet spot, that’s going to be as persuasive as possible. And it’s not a single tool. It’s probably coming from several angles at once to maximize persuasiveness without crossing the line into forcing compliance.”

HuffPost’s “Work In Progress” series focuses on the impact of business on society and the environment and is funded by Porticus. It is part of the “This New World” series. All content is editorially independent, with no influence or input from Porticus. If you have an idea or tip for the editorial series, send an email to [email protected].