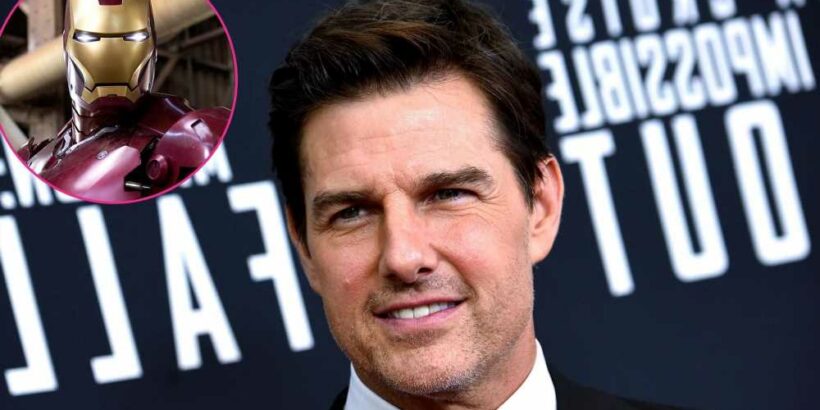 “I am Iron Man!” In another universe, the now-infamous line from the eponymous 2008 movie could have been spoken by Tom Cruise instead of Robert Downey Jr.

The Top Gun actor was initially offered the role of Tony Stark, but ultimately turned it down due to wanting a certain level of control over production.

Cruise opened up about why he chose not to take part in the Marvel film while speaking with IGN in February 2005.

“[Marvel Studios] came to me at a certain point and, when I do something, I wanna do it right. If I commit to something, it has to be done in a way that I know it’s gonna be something special,” he said at the time. “And as it was lining up, it just didn’t feel to me like it was gonna work. I need to be able to make decisions and make the film as great as it can be, and it just didn’t go down that road that way.”

The Mission: Impossible star later revealed that he thinks Downey Jr. was the right choice for the famous Avenger.

Tom Cruise Through the Years: His Mega-Hit Movies, Headline-Making Marriages and More

“I love Robert Downey Jr. I can’t imagine anyone else in that role, and I think it’s perfect for him,” he told Comicbook.com during a 2018 interview.

Scroll down to relive more of Cruise’s movie career:

Does Tom Cruise Need a Lot of Control Over His Movies?

The Risky Business star is known for having a strong management presence on his films. However, The 2017 reboot of The Mummy, which was supposed to kickstart the “Dark Universe” for Universal Studios, ended up being a commercial failure.

Similar to how the Marvel comic book line has its own cinematic universe, Universal executives wanted one for themselves. Instead of superheroes, this would feature classic monsters like the Mummy, Wolfman, Frankenstein and more with character crossovers between films.

Universal wanted The Mummy to do what Iron Man’s transition to the big screen did for Marvel. But it wasn’t meant to be.

The Mummy failed at the box office, pulling in only $32 million domestically during its open weekend with less-than-stellar reviews.

Who Is Iron Man?

Most people have heard of the Marvel Cinematic Universe, which includes dozens of movies as well as several original TV shows.

It all started with 2008’s Iron Man. The film tells the story of Tony Stark, the billionaire head of Stark Industries, which manufactures weapons. Tony begins the film as an egotistical executive who is captured by terrorists demanding he build them a super weapon.

Seeing the horrific destruction his weapons can cause (and how easily they can fall into the wrong hands), Tony sees things from a new perspective. He escapes from his captors in an iron suit he built with the help of another prisoner and is rescued. Back stateside, he creates a sleeker, more advanced design of the iron suit and begins using it to help others.

Following Downey Jr’s completion of Tony Stark’s story, rumors surfaced that a “new” version” of Iron Man could possibly make a brief cameo in Doctor Strange in the Multiverse of Madness — and that the new version could be played by Cruise. Of course, it was just that — rumors.

The Doctor Strange sequel, directed by Sam Raimi, was supposed to include variants of classic characters from different universes. This fit into the story of the titular hero traveling across the multiverse and people had reasons to believe Cruise might appear as Stark in the film.

The MCU isn’t a stranger to having multiple actors play the role of a specific character. Spider-Man: No Way Home also featured variants of the web-slinger in the form of previous Spidey actors Tobey Maguire and Andrew Garfield. That movie was a giant hit, making almost $2 billion at the global box office.

A May 2022 interview with Rolling Stone revealed the film’s screenwriter, Michael Waldron, wanted Cruise to suit up as an alternate-world version of Iron Man in Multiverse of Madness. Unfortunately, scheduling conflicts stopped the opportunity in its tracks. The Jerry Maguire actor was busy filming the latest sequels to his Mission: Impossible franchise for Paramount Pictures at the time.

Who Else Didn’t Appear in Doctor Strange 2?

There were other rumored cameos in Multiverse of Madness that never happened. The cast for the Raimi-directed film, led by Benedict Cumberbatch, Elizabeth Olsen and John Krasinski, was seemingly meant to have a few more names attached.

There was speculation that Ryan Reynolds would show up as Deadpool, Mahershala Ali would debut as Blade, Tobey Maguire would appear as Spider-Man and Norman Reedus would be featured as Ghost Rider.

Would Mickey Rourke Still Dislike Tom Cruise If He Were Iron Man?

If Cruise had taken the role of Iron Man, things could have been awkward in the sequel!

Mickey Rourke costarred in 2010’s Iron Man 2 as the villain Whiplash. More than a decade later, Rourke publicly lashed out at Cruise while appearing on Piers Morgan Uncensored in July 2022.

The Sin City actor said the Top Gun star had been playing the same part for “35 effing years.” He also called Cruise “irrelevant.”

Does Tom Cruise Want to Make a Superhero Movie?

While Cruise has admitted to being open to Iron Man before the creative control issue derailed things, he’s also stated the genre is not at the top of his to-do list.

During a 2016 interview on “Jimmy Kimmel Live!,” host Jimmy Kimmel asked Cruise if he’d had any meeting with DC or Marvel about superhero roles. Cruise replied, “no” at the time, saying that while he enjoys the genre, he “makes the “Missions” and the “Reachers” instead. “Just different kinds of films,” he explained.

However, he gave a different opinion at CinemaCon expo in Las Vegas two years later.

“There’s always another mountain in anything,” he told an MTV News reporter, noting that he will never turn down something he finds interesting. He added that he would consider any role the audience would like to see him in which he could contribute “something.”

Could Tom Cruise Appear as Iron Man in the Future?

At the 2022 San Diego Comic-Con, Marvel announced the “Multiverse Saga.” This is the next overarching storyline for future MCU films. (The previous story that focused on “Infinity Stones” was wrapped up in Avengers: Endgame.)

With more multiverse storylines ahead of us and Marvel always wanting to recreate box-office success like Spider-Man: No Way Home, there’s no reason to think the studio wouldn’t try to negotiate something with Cruise.

‘Top Gun’ Cast: Where Are They Now? Tom Cruise, Val Kilmer and More

While nothing is certain now, we decided to make fun, educated guesses as to where he could potentially show up.

Ironheart is a Disney+ series that premieres in fall 2023. It tells the story of Riri Williams, a genius inventor who creates an advanced suit that mirrors Iron Man. In the comics, she is aided by Tony Stark, who helps her become a bona fide superhero. She later replaces him when he falls into a coma.

With Iron Man’s current status in the MCU, Ironheart could be his cinematic replacement. Could Cruise potentially play the role?

This 2024 tentpole will be a major release. A variant of Reed Richards (one of the aforementioned four) appeared in Doctor Strange in the Multiverse of Madness, played by John Krasinski. This might open up another opportunity for Cruise to make an appearance in the MCU.

What Are the Next Avengers Installments?

Avengers: The Kang Dynasty and Avengers: Secret Wars both come out in 2025, and will see the climax of today’s multiverse storyline; more opportunities for an alternate Iron Man to make an appearance. Only time will tell if Cruise will play the rumored role, or perhaps a different character in the MCU.