Nigella Lawson sparked an outpouring of support from fans with a frank tweet about marking Father’s Day ‘as the mother of fatherless children’.

The celebrity chef, who had a son, Bruno, 22, and a daughter, Cosima, 24, with her late husband, the broadcaster John Diamond said online she had ‘never been great at Father’s Day’, following his death from cancer in 2001.

‘So let me commiserate with those for whom this day signifies loss (which is not just those without living fathers) but congratulate those who happily have reason to celebrate today,’ she wrote.

The 58-year-old’s tweet struck a chord with her millions of followers, many of whom were moved to share their own bittersweet tales of loss, including one woman who lost her own husband – and the father of her daughter – just two weeks ago. 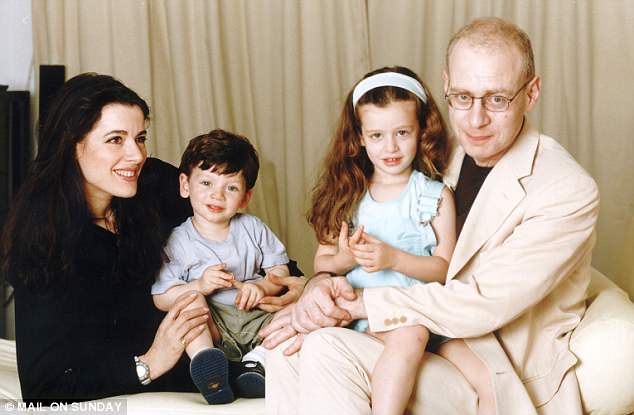 Nigella was married to the late broadcaster John Diamond, seen here with their children Bruno and Cosima, who lost his battle with cancer in 2001 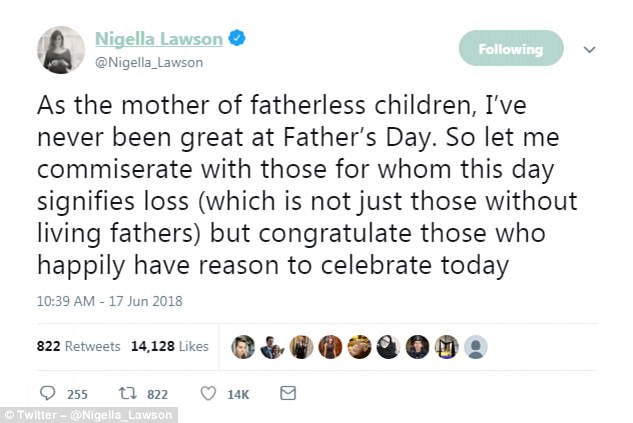 Nigella, whose husband John Diamond died in 2001, said her thoughts were with those for whom Father’s Day ‘signifies loss’

The mother-of-two’s frank tweet was liked and shared thousands of times by her fans.

One follower revealed her own pain on father’s day, having lost her husband just a fortnight before the day fell.

Another told how, 33 years on from her husband’s death, remembering her then toddler son’s confusion ‘still makes me cry’.

‘My children’s father died 5 years ago. Every year is hard – there seems to be no right way of dealing with it,’ another follower wrote online. 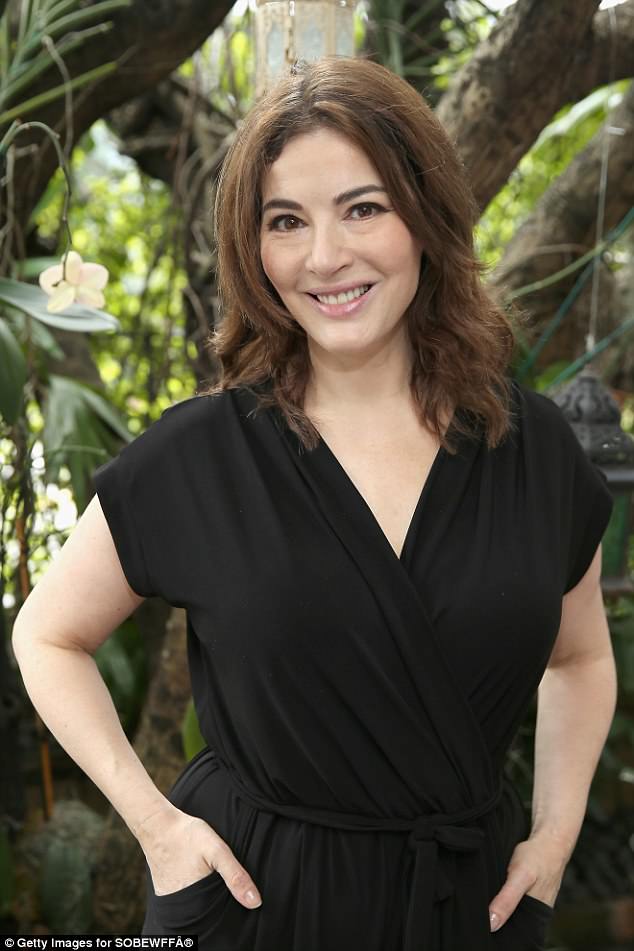 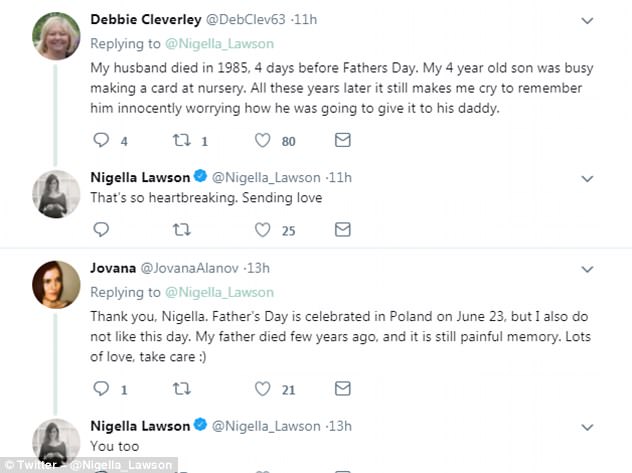 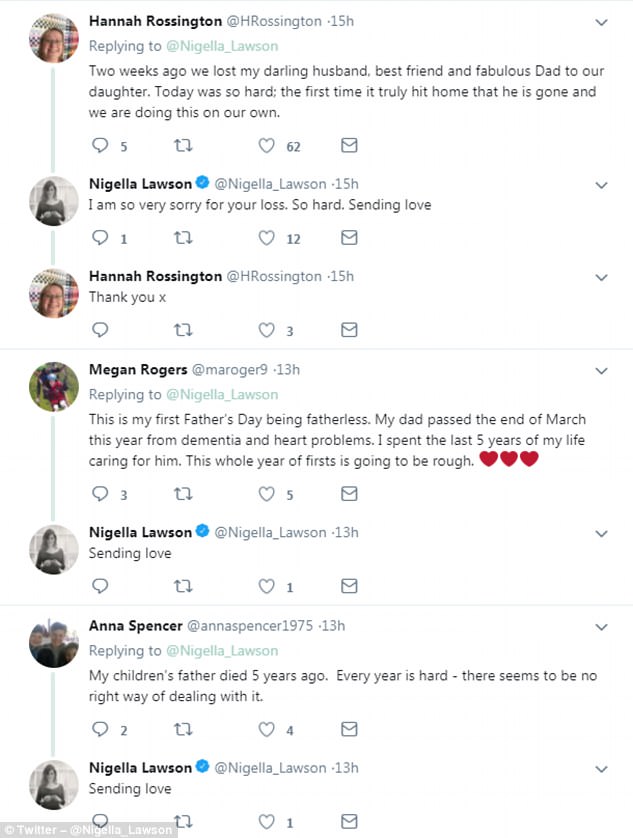 Nigella married John Diamond in Venice, Italy, in 1992, and they went on to have a daughter and a son.

He was diagnosed with throat cancer in 1997 and died in 2001. Nigella has spoken of suffering with depression in the wake of his death at the age of 41.

In 2003 Nigella married the art collector Charles Saatchi. They divorced a decade later, with the chef having filed for divorce having cited ongoing unreasonable behaviour.

Their split followed the publication of photos of Saatchi with his hands around his then wife’s throat outside a Mayfair seafood restaurant.

Earlier this year the TV chef opened up about how she threw herself into cooking as a form of therapy to help her deal with tragedy.

She lost her beloved sister, Thomasina, to breast cancer in 1993 aged 32.

It followed the death of their mother, Vanessa Salmon, to liver cancer aged 48 in 1985.

She told The Australian Women’s Weekly in April:  ‘I don’t want to waste life. It feels so ungrateful not to take pleasure. You have to take pleasure in life while you can because people have that ripped away from them.’

She said of the healing effect of cooking: ‘If you have a friend or a child or anyone who is going through a difficult time and wants to talk about things that aren’t easy, I think you stand much more of a chance if you’re chopping some carrots at the same time.’ 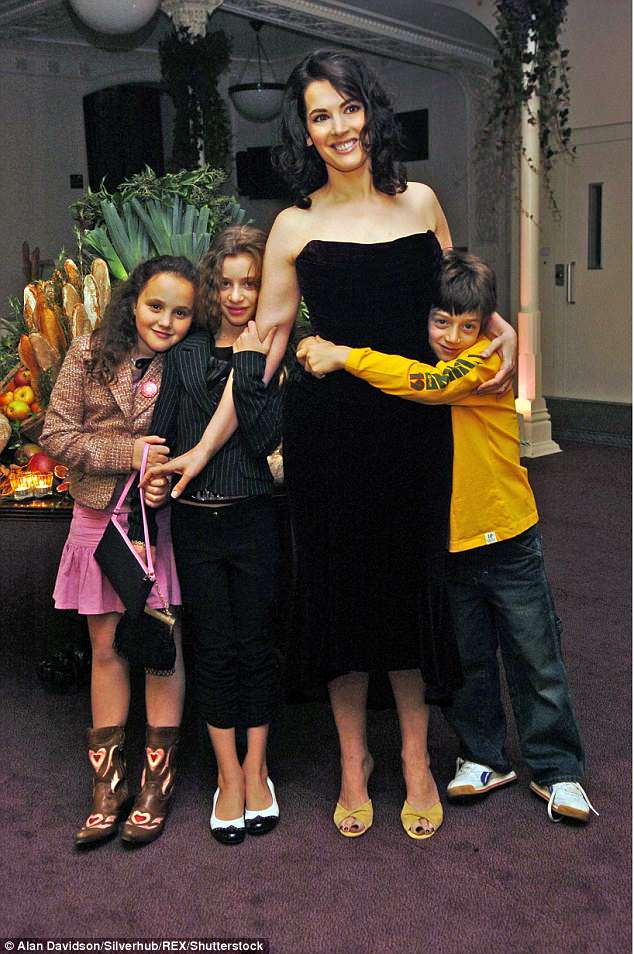 Nigella is seen at the 2004 launch of her book Feast with her then stepdaughter Phoebe Saatchi, her daughter Cosima, and her son Bruno