Wilton Gregory, the archbishop of Washington D.C., became the first African-American cardinal on Saturday when Pope Francis raised 13 new cardinals to the highest rank in the Catholic hierarchy.

He said ahead of the ceremony that he viewed his appointment as “an affirmation of Black Catholics in the United States, the heritage of faith and fidelity that we represent.”

If you’ve heard of Gregory, it might have been this summer, as Black Lives Matter protesters marched through the capital, and were violently forced away so President Trump — Bible in hand — could pose in front of St. John’s Episcopal Church. The next day, when the president visited the St. John Paul II National Shrine, Gregory called it baffling and reprehensible.

He hopes his relationship with President-elect Joe Biden will be different.

Like Mr. Biden, Gregory has experience with entering an office at a time of crisis. Pope Francis named him archbishop of Washington, D.C, last year — the same year Francis defrocked one of his predecessors, Theodore McCarrick, for sex abuse, culminating this month in a groundbreaking Vatican report.

“Let’s be honest, Chris. It revealed some awful events and huge mistakes on the part of church leadership,” Gregory told Livesay. 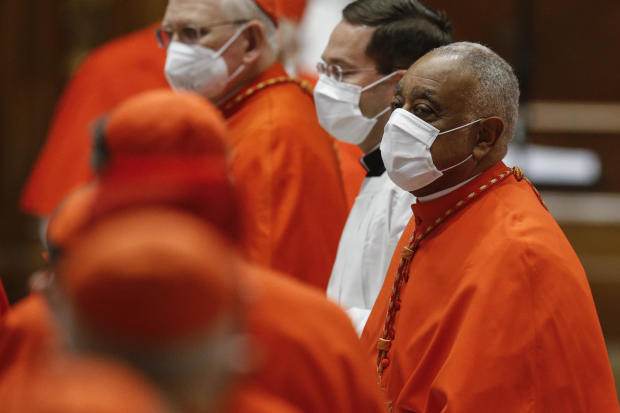 Gregory’s appointment comes after a year of racial protests in the U.S. sparked by the latest killing of a Black man by a White police officer. Francis has endorsed the protests and cited the American history of racial injustices.

“There is awareness now of the need for racial reconciliation, an awareness that I have not seen at this level and at this intensity before,” Gregory told The Associated Press.

His appointment also comes amid the coronavirus pandemic, which on Saturday overshadowed what is otherwise a crowded, joyous ceremony. He was in protective quarantine before the ceremony, which clocked in at an unusually quick 45 minutes. Cardinals new and old wore protective masks in a nearly empty St. Peter’s Basilica.

Most of the cardinals removed their masks when they approached a maskless Francis to receive their red hats, but Gregory kept his on. 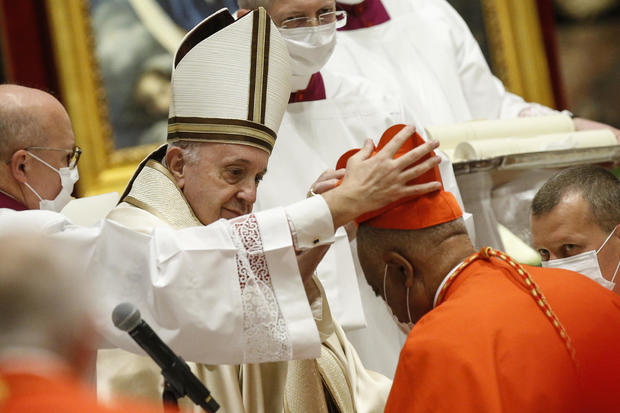 COVID-19 erupted in Italy in February and has seen a resurgence this fall. The Vatican is under a modified lockdown, with the Vatican Museums shuttered and Francis’ public general audiences cancelled. Instead he holds them in private, livestreamed.

The cardinal candidates and other who came to Rome from afar for Saturday’s service were required to undergo 10 days of Vatican-mandated quarantine at the pope’s hotel, where meals were brought to their rooms, Zoom calls provided contact with the outside and the cardinals’ new red robes were hand-delivered by Rome’s famed ecclesial tailors.

Usually, consistories are full of parties and crowds, with days of receptions, Masses and dinners for the new cardinals and their friends. Usually, the consistory itself is followed by “courtesy visits,” where the new cardinals greet well-wishers and the general public from the grandeur of their own reception rooms in the Apostolic Palace or Vatican auditorium. This year, there were no courtesy visits, and each cardinal was given a 10-guest limit.