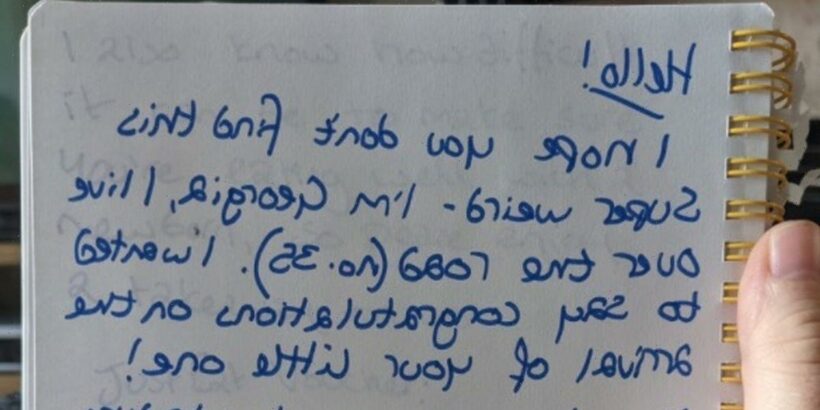 A woman decided to write a note to a fellow mum and neighbour – however she asked for advice before sending it.

The lady, named Georgia, took to Twitter to ask people if the note was "nice" or "weird".

She shared photos of the note with her 3,129 followers as she asked for advice.

The note read: "Hello! I hope you don't find this super weird – I'm Georgia, I live over the road.

"I wanted to say congratulations on the arrival of your little one!

"I've been meaning to introduce myself for ages, but I am a wuss.

"We had a little girl in Dec, so I know that you're having a magical/exhausting time."

It continued: "If you ever fancy a cuppa or a walk or whatever, feel free to pop by – my number is [covered].

"I also know how difficult it is to make sure you're eating well with a newborn, so please enjoy a takeaway on us. JustEat voucher: [covered]."

Despite only asking her followers, the tweet soon went viral, racking up more than 12,500 likes.

People were loving the note, as many praised Georgia for the sweet letter.

One wrote: "This is so lovely, I am currently 17w and would love love love a note from a neighbour also with a baby wanting to make friends!!! You are a real life angel."

While another added: "This is lovely. Being a first time mum is hard and quite lonely, need all the mum friends you can get."

A third chimed in: "Genuine, empathetic, and neighbourly. If I'm wrong, you can come back and scold me."

It seemed most people had the same opinion that the letter was "nice" as Georgia revealed she'd sent the letter to the fellow parent.

She wrote: "Ok it seems we're overwhelmingly in the 'nice' camp. I've put it through their door, I'll keep y'all posted. It's also slightly self-serving in that I want a new pal."

And there was good news as she later revealed she'd made a friend in the fellow mum.

She shared a text from her neighbour, which read: "Hi Georgia. Thank you so much for the JustEat voucher and your note.

"We had a little girl on June 26th. The last few weeks have flown by! It's nice to know you're just over the road.

"Had a few nights at the hospital recently with her as she was vomiting all her feeds, but a change in formula seems to of worked.

"Definitely up for a cuppa and a walk when I'm fully recovered from my C-section. I overdid it early on and learnt the hard way! How you finding motherhood? xx"

Aww, it seems some stories do have happy endings after all.