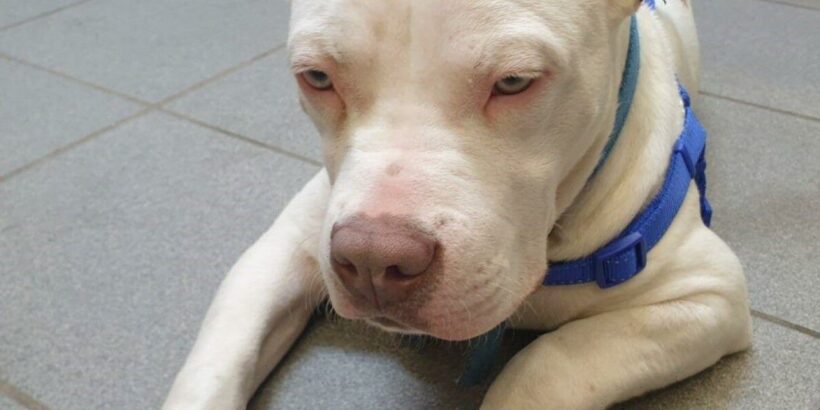 Siobhan Stewart Buchan of Ferry Road Drive, Edinburgh, was found guilty of failing to seek veterinary treatment for her American Bully puppy at Edinburgh Sheriff Court on May 27. The pup named Ice was just five months old when he had the painful procedure carried out to remove flaps on both ears. Buchan has been banned from keeping more than one dog for three years.

The Scottish Society for the Prevention of Cruelty to Animals (SSPCA) said the wounds from the unnecessary surgery were swollen and infected, causing the poor pooch a huge amount of pain and distress.

According to the animal welfare charity, the SSPCA was alerted by a concerned member of the public on July 11, 2020, that there was a puppy with illegally cropped ears.

An undercover inspector said: “When we attended, it was clear that Ice’s ears had only recently been cropped.

“Both ears showed signs of inflammation and infection and were visibly swollen, with sutures still present in both wound sites.

“It was clear that the pup needed immediate veterinary attention.”

Ice was taken straight to a vet where he received treatment.

Buchan, 31, claimed she bought the puppy from France, although the procedure is also illegal there.

The SSPCA special investigations unit undercover inspector said: “It is an immensely painful and unnecessary procedure for an animal to go through, even if provided with full expert veterinary attention.

“Any dog that has been subjected to this procedure will have suffered significantly, physical and mentally, and will have been put at huge risk to health and life from the use of drugs, by untrained personnel, to anaesthetise the animal prior to procedure.”

They added that Buchan allowed Ice to suffer “to a great extent” without veterinary care in order to avoid police involvement.

The inspector said this put Ice at great risk of physical and psychological harm.

They continued: “We are pleased that Buchan will not be able to own any further dogs and we hope she will carefully consider her ability to care for any animal in the future.”

DON’T MISS:
Police officer taken to hospital after car and bus crash [LATEST]
Princess Eugenie and husband Jack to move to Portugal [REVEALED]
Prince Harry to run back to UK ‘with tail between legs’ as ‘not happy’ [REPORT]

Ice is now being cared for by the SSPCA ahead of the charity finding him the loving home he deserves.

It is a practice that involves cutting off part of the ear flap, often carried out without anaesthesia or pain relief, according to the BVA.

While it is illegal to carry out the procedure in the UK, it is not illegal to sell or import dogs whose ears have been cropped.

It is also not a specific offence to send dogs abroad to be cropped, although the BVA has called on the Government to close these legal loopholes.

The BVA, which has launched a #CutTheCrop campaign, reports vets and animal welfare organisations are increasingly seeing cases of dogs with cropped ears.

It states the “worrying trend” is rife on social media with celebrities and influencers sharing images of ear-cropped dogs.

If anyone is concerned about an animal, call the SSPCA’s confidential animal helpline on 03000 999 999.

Alternatively, to report urgent cases of cruelty, neglect or an animal in distress call the RSPCA on 0300 1234 999.