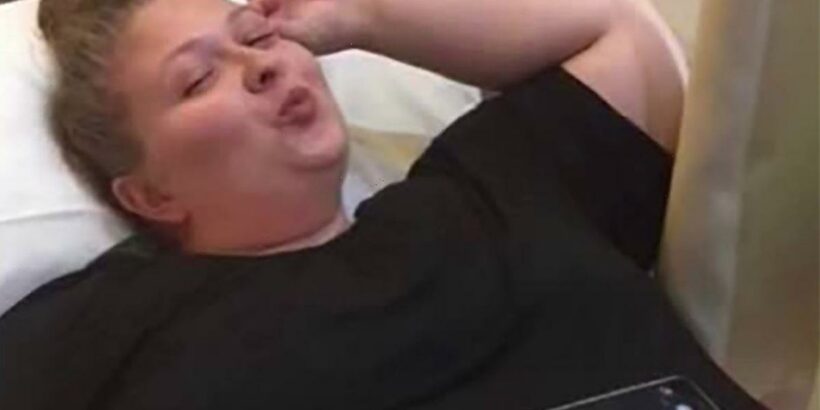 A woman has revealed that she was blocked by a date for being ‘fat’ – and has now stunned with her weight loss transformation.

Sofia Louto, 24, decided to make the leap to get healthy after feeling “depressed” and “unhappy” with herself.

The stunner, from Greece, spent a year and 10 months shedding the pounds to get fit, and ended up losing a huge 12 stone.

READ NEXT: 'I spent years hiding body – but now could cry about how good I look in bikini'

But before her weight loss, people were not too kind to Sofia.

In a viral TikTok clip, the blonde beauty revealed how a bloke she was chatting to blocked her because of her size.

Sofia shared a snap of herself pouting and posing on a bed from when she was 12 stone heavier.

The babe shared a conversation between herself and a potential lover from her past.

She wrote: “You’re blocking me because I’m fat?”

Brutally, the lad then blocked Sofia.

But instead of letting the cruel incident get to her, Sofia has completely turned her life around to become healthier – and she certainly looks happier.

The gorgeous blonde shared a series of snaps of herself posing in a bikini and some figure hugging attire, which is a massive difference from the baggy clothes she used to wear.

Sofia sassily wrote in the caption “bye bye” as the clip has continued to rack up over four million views.

In awe of her weight loss transformation, many people fled to the comments to praise Sofia and blast the cruel lad.

One person commented: “As long as you did it for yourself, not him. Otherwise, he won."

Another user added: “Karma is real.”

While a third person voiced: “You’re pretty then and pretty now. He don’t deserve you! GO GIRLL.”

Someone else praised: “When I tell you my jaw DROPPED.”

Meanwhile, a fifth user said: “You were beautiful before and after, remember that it’s the inside that matters and that you are beautiful no matter what!”