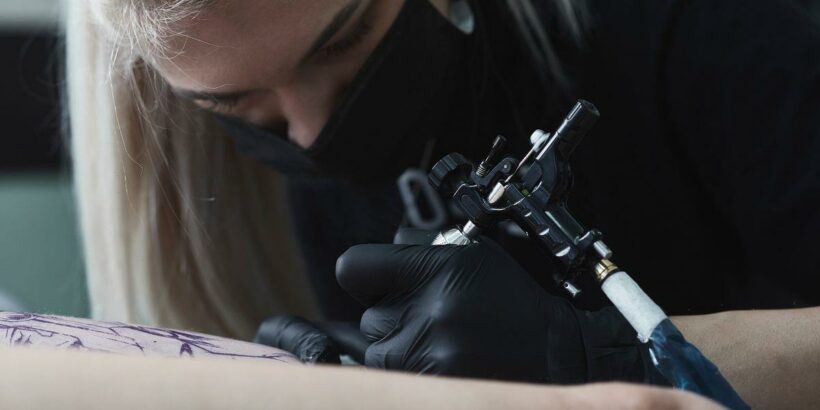 A woman has been dubbed “trashy” for her array of questionable back tattoos.

Tattoos are often seen as a form of art and self expression that are permanent features on your body.

Some people like to get inked with butterflies or perhaps others prefer the names of their children etched onto them.

But this woman has used her back as the canvas to express her unusual sexual desires.

In a picture posted onto the ‘trashy’ Reddit forum, the woman can be seen laying on her front getting inked by a tattoo artist.

Halfway through the design, it appears the ink enthusiast is getting the word ‘addict’ penned on her back – but with a raunchy twist.

Instead of the usual spelling of the word, the woman has got penned “add***” to perhaps refer to her love of male genitalia.

However, this was not the first time the woman opted for some unsavoury body art.

Three large tattoos were already in existence on her back.

On her left shoulder, a transgender symbol had three male symbols pointing into it which hints the woman is into group sexual activity.

In a swirl-like font, she also has the name “community girl” inked onto her lower back.

And just above her bra, the woman has the phrase “pretty little c** dumpster" – implying that she likes to get down and dirty.

In light of the woman’s risqué body art, many people have been left baffled at the designs.

Another user added: “So nice to see a community driven individual.”

A third voiced: “This HAS to be a degradation kink, there's absolutely no way, a normal woman would do this.

"Even hopped up on something you'd still know "c** dumpster" shouldn't be TATTOOED on you.”

Someone else remarked: “This feels like a kink thing.”

Meanwhile, a fifth person expressed: “I mean, at least they are covered in public most of the time.”