Woman says she feels ‘unappreciated’ because her parents always buy her ‘cheap’ birthday gifts – so do YOU think she’s right?

A woman has sparked a debate on how much a present should cost after growing fed-up of receiving ‘cheap gifts’ from her parents.

Writing on Mumsnet, the woman, believed to be from the US, complained that her parents never bought her what she wanted for her birthday, instead settling on cut-price alternatives like Walmart trainers and ‘dollar store umbrellas’.

She said her parents behaviour had left her ‘upset and frustrated’, saying: ‘I wished they’d get me something a bit special for the holidays, and if they couldn’t a card with a hart-felt [sic.] message would be nice, but the cheap gifts have continued.

‘I feel frustrated, unheard, and unappreciated, [am I being unreasonable]?’

The post divided users, with some telling the woman her expectations were too high. 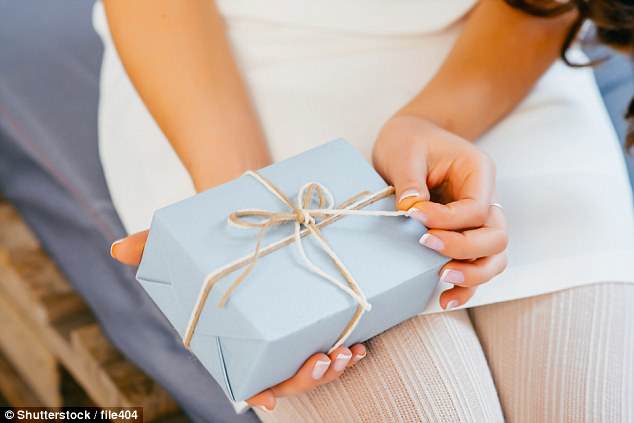 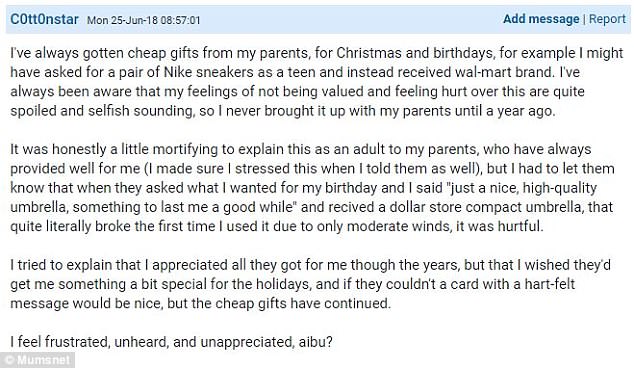 However, others urged the woman to share her feelings with her parents to try to change things in the future.

Some responses accused the woman of behaving like a child and claimed she was being ungrateful – some even stated her behavior made her undeserving of receiving any future presents.

One said: ‘You sound extremely ungrateful and if I were your parents you would be receiving no more gifts from me, then you would really have something to cry about.’

Another wrote: ‘I’m sorry, but I think you need to do a bit of growing up here, and leave the teenage hurt behind, and just accept the fact that your parents don’t show love with extravagant gifts.’

The majority of people sympathized, with some admitting they had faced similar experiences in their own life.

A user speaking under the handle ‘Ellafruit1’ claimed the woman was better of buying items she wants herself instead of relying on her parents.

She said: ‘YANBU – I imagine it’s not about the gifts and the amount they spend but the fact that you don’t feel heard.

They’ve asked hat you would like and then ignore you, and yes of course that’s going to hurt.’

Another wrote: ‘I get it. Why ask if they’re not going to listen I guess. I’d say there’s nothing to be done really, just accept it as a quirk they have.’

The woman asked for advice on speaking to her parents about the gifts as she believed not using them could hurt their feelings.

She said: ‘To answer the few who are asking, they could certainly afford whatever I asked for, but that’s not the issue, like many other people are saying, it’s about showing love.’

One person said: ‘Well if gift is cr** like that umbrella you use it, it breaks, and you’re done. Anything absolutely dire you donate, or keep it and regift it to them later. My suggestion is to drop it entirely. Don’t comment etc.’

Another suggested: ‘Maybe ask for consumables instead? Like food or some pleasant wash stuff that you can find in cheap stores (yes they do exit)? I feel for you op but sometimes it’s best to shop for yourself if you want a specific thing.’