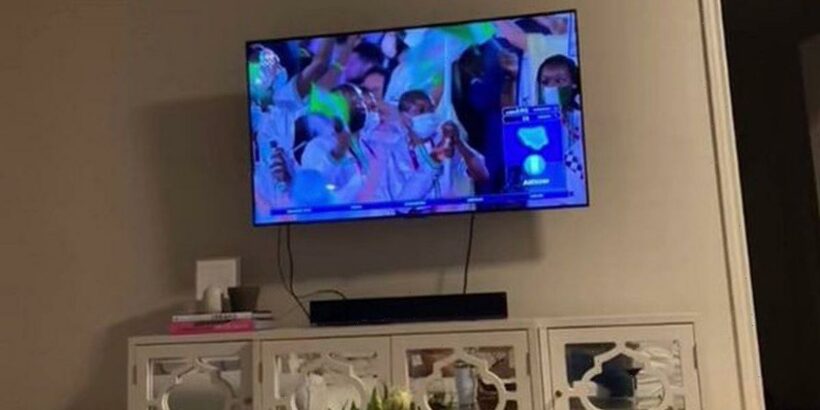 A woman joked her date was cheating on her after spotting a detail in an apparently innocent snap of him watching the Olympics.

Megan-Marie took to TikTok to expose the bloke’s apparent faux-pas and the video has since been seen more than 3 million times.

The clip shows her re-enacting a conversation text that she’d had with the fella.

After asking what he was doing, the lad replied: “Watching the Olympics with the boys, see you tomorrow.”

He then followed up with a snap of him in his living room with the Olympics on the TV.

But, when she looked at his mirrored cabinets, Megan was convinced she spotted a female pair of legs sitting next to him on the sofa. She also noticed some books that she thought belonged to a woman – including one all about fashion giant Chanel.

In her video caption, Megan used the hashtag “cheater” and asked: “Do I have dumb written on my forehead?”

Viewers flocked to the comments section to voice their thoughts, with some convinced he was in fact playing the field.

But others defended him, suggesting it could simply have been a female friend.

And Megan clearly was not too fussed by the discovery and has since shared an update explaining she is still meeting up with the lad.

“I was on Hinge and I met this guy and we were texting for a couple of days and then he was like ‘hey, do you want to hang out tomorrow?’” she said.

“I was like ‘yeah sure’. So then we had plans to hang out and then we kept texting.

“Like as a joke, then he sent that picture.

“We went on a date the next day and we’re hanging out tonight and tomorrow, I think.

“He watches my TikToks – he’s not a piece of trash like everyone is saying, it’s just funny.”