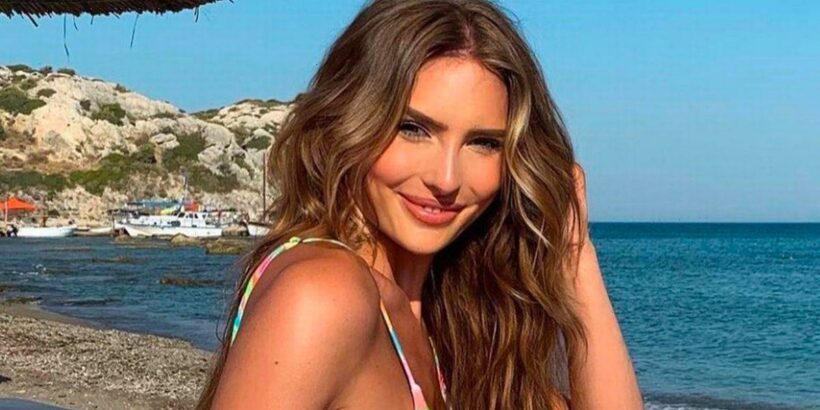 Influencer Georgie Clarke, who's known for her fashion, women's rights and self-love messages, has received praise from fans for one of her latest social media posts.

The brunette beauty, who boasts an impressive 690,000 Instagram followers, took to the site to share a topless holiday snap.

She told her fans that she never used to sunbathe topless as she felt "shame" over her big boobs.

However, the body positive star said she realised it's 'not her fault' that they're big, and said that any men staring at her should 'keep their eyes to themselves'.

Georgie was seen ditching her bikini top in the snap as she lay on a subbed while soaking up the rays in Greece.

She covered her bare chest by laying on her stomach, however.

"They’re not sexual parts of our bodies they’ve just been sexualised.

"I’d feel like even in a bikini fully covered bottom and top I had to cover them up.

"Once I had a situation recently where a man’s wife asked me not to be in a bikini in front of her partner on holiday… yes top and bottom covered – and yes she was dead serious.

"If your partner or a man can’t keep his eyes to himself why should I have to be the one to be sweltering hot on holiday?!

"Women shouldn’t be playing into this narrative either because again I shouldn’t be blamed for the size of my boobs??!!!"

Concluding her post, she told fans: "Here's my permission… your boobs deserve to be free."

Fans were loving the post, with it racking up more than 14,000 likes.

One exclaimed: "Love this so so much," while another added: "Yes girl, free the nip."

A third chimed in: "It is so infuriating being told as a woman we need to cover up because xyz could be looking – this is something I’ve dealt with my whole life.

"Nowadays I say 'If someone is looking at me inappropriate it’s a them problem not a me problem'."

However, she also recently slammed haters who called her out for sharing a 'nice' photo of herself.