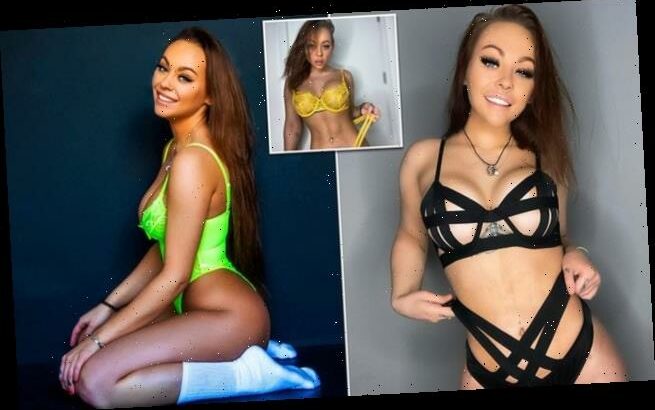 Woman who was told by her cheating ex that ‘no one would ever find her attractive’ when they split is now earning £25,000 a MONTH sharing racy snaps on OnlyFans

A woman whose confidence plummeted after receiving cruel comments from her ex-boyfriend now earns £25,000 a month by showing off her looks via online subscription service OnlyFans.

Willow Sky, 23, from Essex, was with her boyfriend for years and although things started well, the relationship eventually turned sour.

The model claims her ex told her ‘no-one would ever find her attractive’, something which she says left her insecure about her looks.

However, Willow was determined to get her own back following their break-up and has now became a huge success on the racy fans-only site, raking in the cash by showing off her body – and she’s also found love again. 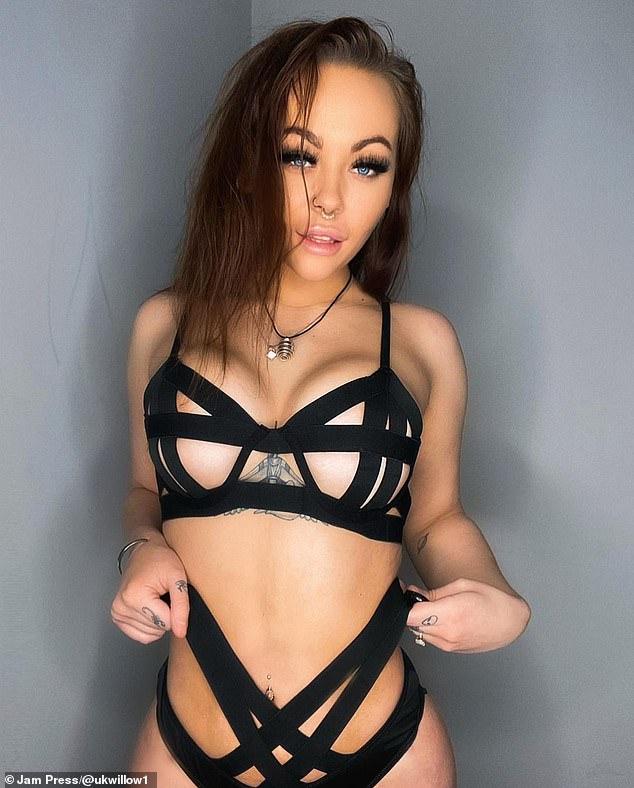 Willow Sky, 23, (pictured) from Essex, has revealed she earns £25,000 a month by sharing photos and videos of herself on OnlyFans – her confidence was shattered by her previous partner after he told her she’d struggle to find someone new 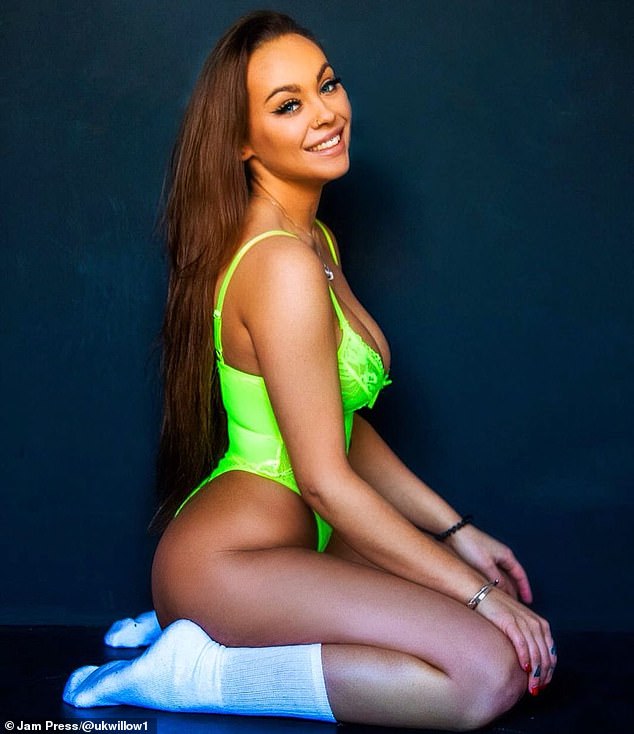 Willow (pictured) explained that she turned to the subscription service after a break-up with the man, who had cheated on her with other women 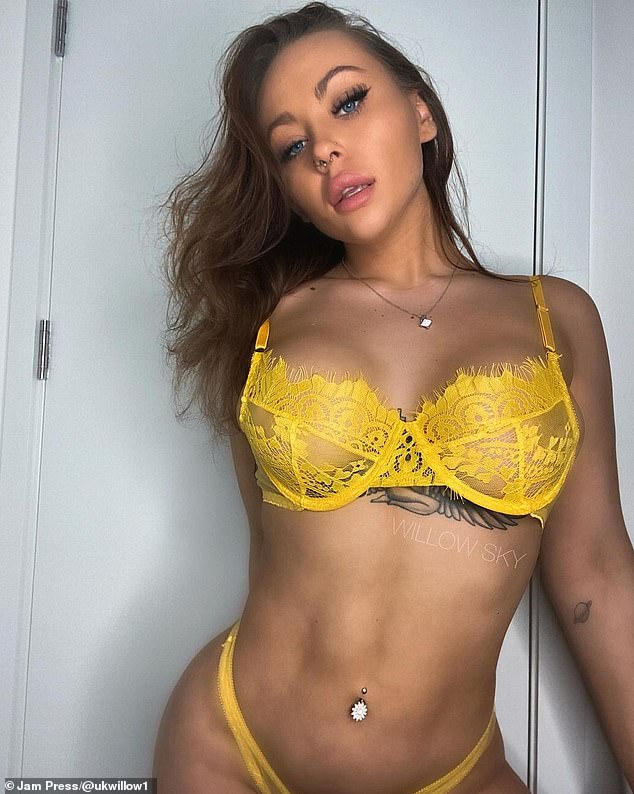 Willow who has 12,800 followers on Instagram, currently earns a staggering £25,000 a month from sharing videos and photos of herself.

‘It’s very hard when the one person you’re always trying to impress, look your best for and want to be most comfortable and confident around is the one pushing you back and doing the complete opposite.’

Willow claims she also caught her ex texting and going away on holidays to sleep with multiple women. 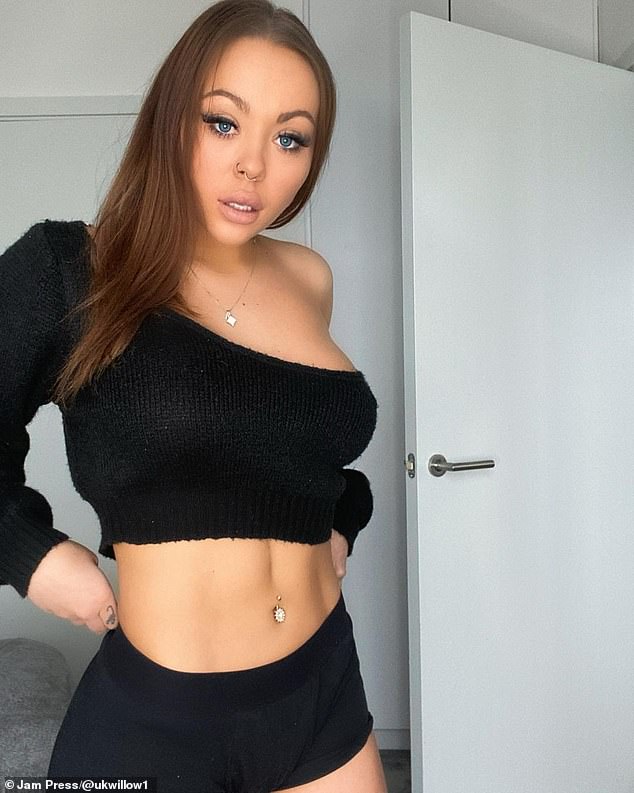 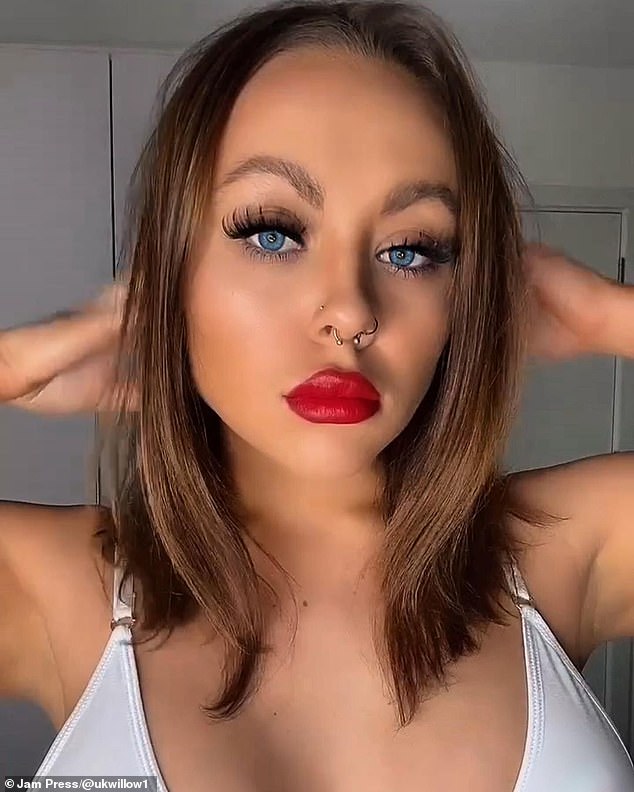 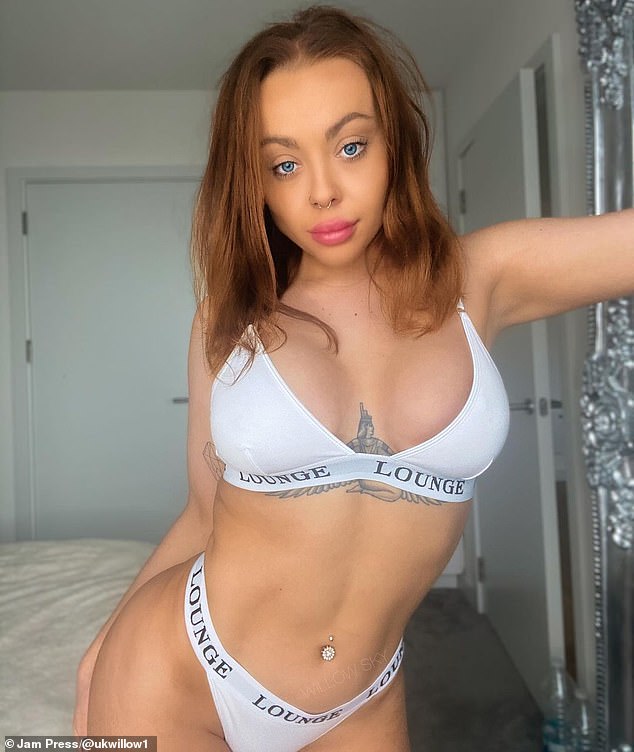 However, she’s now got her revenge as thousands of men lust after her on OnlyFans.

She first signed up in July 2019 but didn’t start sharing content properly until February last year.

Willow said: ‘I joined because I’ve always been interested in the industry but never knew how to get involved.

‘My friend told me about the site so I signed up but was kind of sceptical as I felt like a small fish in a big pond. 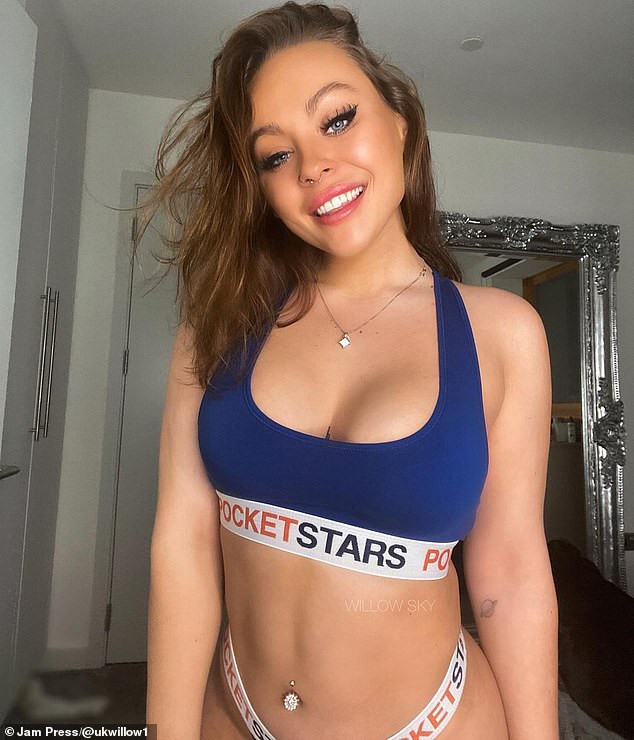 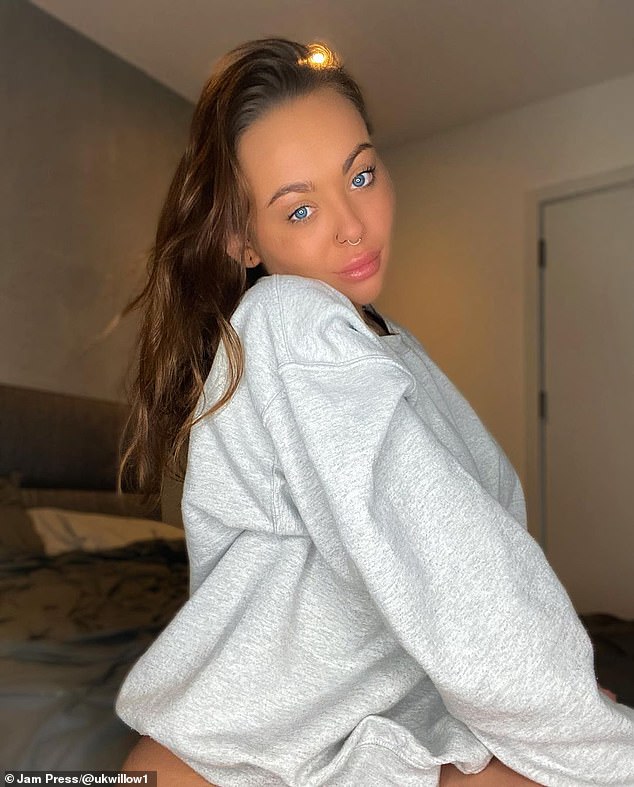 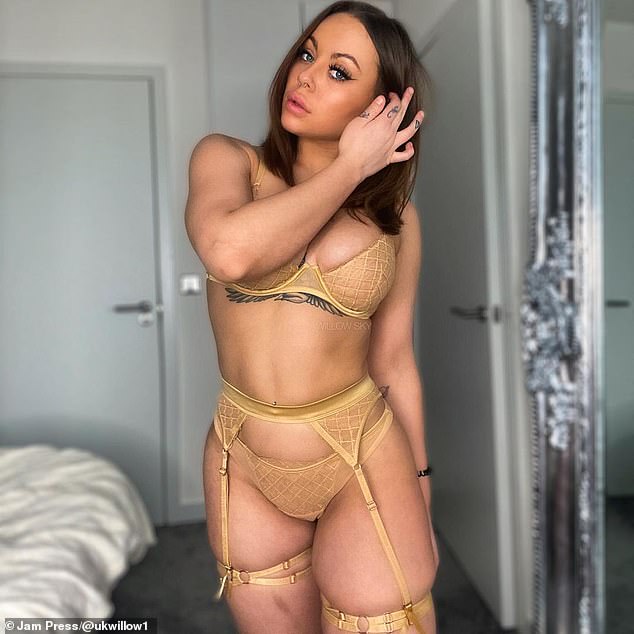 Willow (pictured) revealed that she enjoys experimenting with different lighting, angles and outfits to make herself feel great

‘I left it for a few months then thought to myself, ‘why am I caring what others think of me and not doing what I want to?’ So I went full time and started putting all my effort into it and collaborating with other creators.’

Willow revealed joining OnlyFans has helped to boost her confidence as she is constantly lavished with compliments from subscribers.

She said: ‘I feel like you learn to love yourself more as you’re always experimenting with different lighting, angles and outfits so you find what works for you and it makes you feel great. 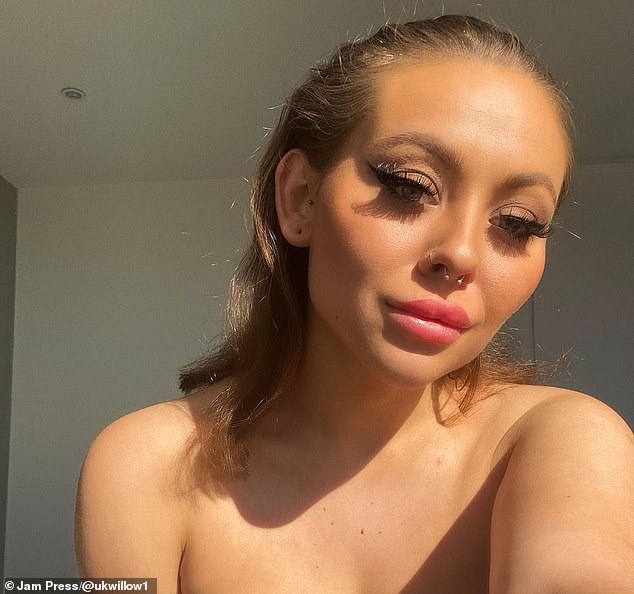 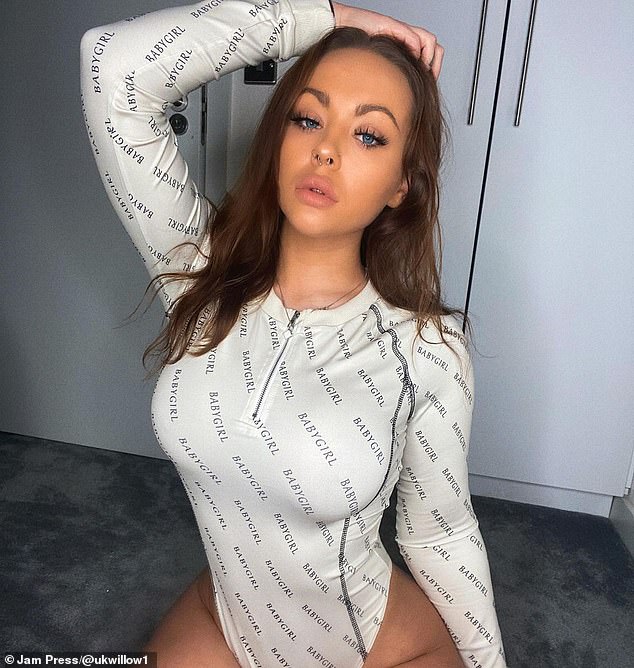 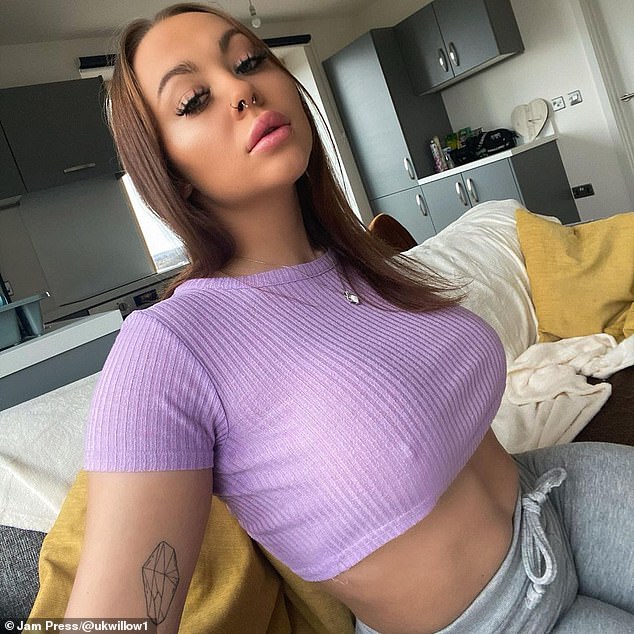 ‘I also love being able to talk to subscribers in my direct messages. Playing games with them and finding out what turns them on or what their fetishes are is fascinating.

‘There are so many things I love about this job, I could go on forever. But the best thing is that it’s very lucrative.’

Willow took time after her break up to work on loving and accepting herself – and now refuses to listen to other’s critical remarks about her. 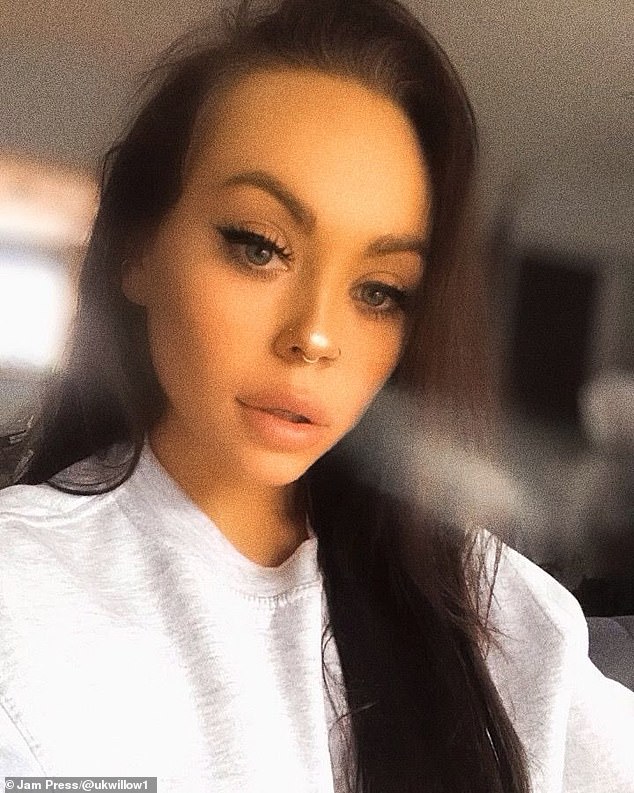 She has also managed to find love again with a new partner of two years, not named for privacy reasons.

Willow added: ‘Everything I do is for me now and the only person I want to impress is myself.

‘Of course with my job, I have to impress to gain and keep fans but I feel if they see a confident woman who knows what she’s doing, that’s attraction.’ 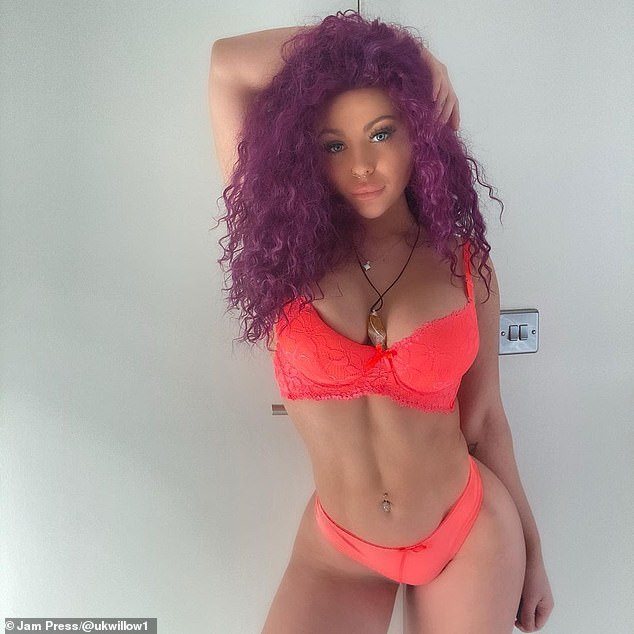