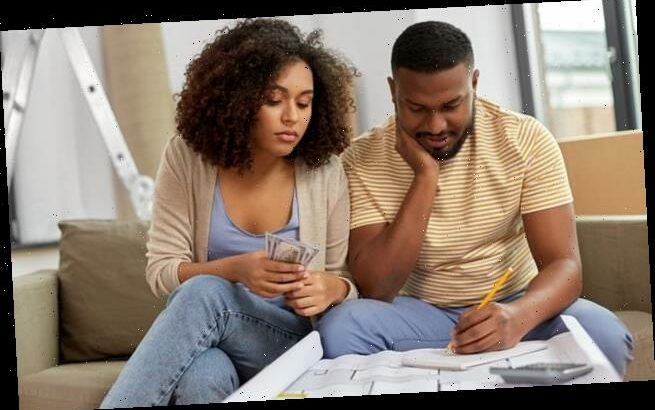 A woman was left furious after discovering her fiancé had used an online calculator to work out how much money she will take home each month.

Posting anonymously on Mumsnet, the woman, who lives in the UK, explained she and her husband-to-be keep their finances separate because he doesn’t want a joint account and believes she is ‘not entitled to the money he earns’.

Despite him earning more they roughly split their outgoings down the middle, with the woman covering childcare and him paying for mortgage and bills.

However she was left shocked when she found out her husband had tallied up how much money she will earn after a pay rise, saying it was an ‘invasion of privacy’. 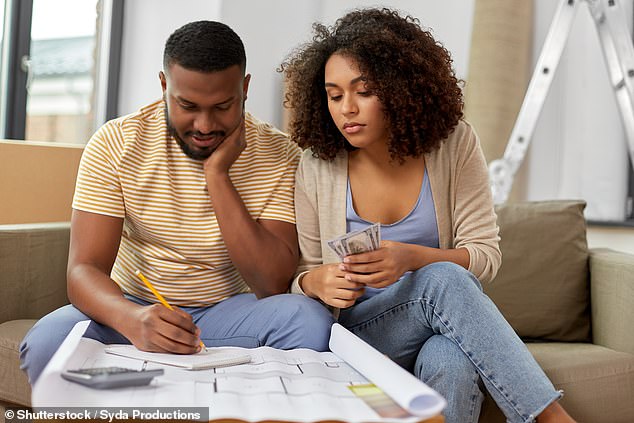 A woman was left furious after discovering her fiancé had used an online calculator to work out how much money she will take home each month. Stock image 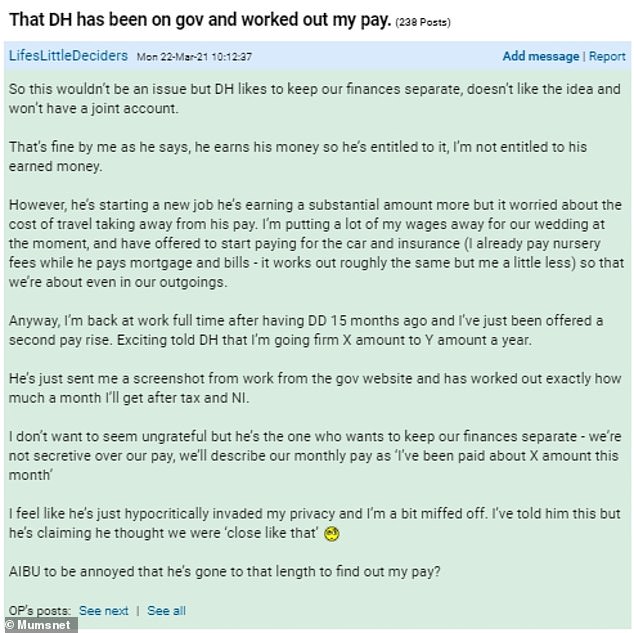 Posting anonymously on Mumsnet , the woman, who lives in the UK, explained she and her husband-to-be keep their finances separate because he doesn’t want a joint account and believes she is ‘not entitled to the money he earns’

Explaining the situation, the woman wrote: ‘I’m back at work full time after having DD [darling daughter] 15 months ago and I’ve just been offered a second pay rise.

‘Anyway, He’s just sent me a screenshot from work from the gov website and has worked out exactly how much a month I’ll get after tax and NI.

‘I don’t want to seem ungrateful but he’s the one who wants to keep our finances separate – we’re not secretive over our pay, we’ll describe our monthly pay as ‘I’ve been paid about X amount this month.

‘I feel like he’s just hypocritically invaded my privacy and I’m a bit miffed off. I’ve told him this but he’s claiming he thought we were ‘close like that.’

The wide-ranging post sparked dozens of responses from other users, who questioned the way they split their finances and urged the woman to be careful with regards to the mortgage.

On the issue of the income calculator, the users were split, with several failing to understand why her fiancé shouldn’t be allowed to know her take home salary.

One person wrote: ‘Warning bells ringing here OP. You aren’t married and he pays the mortgage while you pay for child care. If you split he has the house.

‘If you opened a joint account for bills and both paid an agreed contribution into this for all bills – mortgage and childcare – you would have more protection. You are very vulnerable and it looks suspiciously as if this is deliberate on his part.’

Another said: ‘Why should your outgoings be the same if he earns a lot more than you? Have a serious think about those wedding plans, all that money you’ve saved could be put to a lot better use.’

Others said they wouldn’t be angry if their partner calculated their finances because it can help when planning the budget.

‘He is not being unreasonable at all. He didn’t look up your salary band, he just calculated your take home. Weird to be upset about it. But you two need to properly join your finances and be more transparent,’ one wrote.

Another said: ‘I can’t see the issue with what he did seeing as you already told him what you earn.