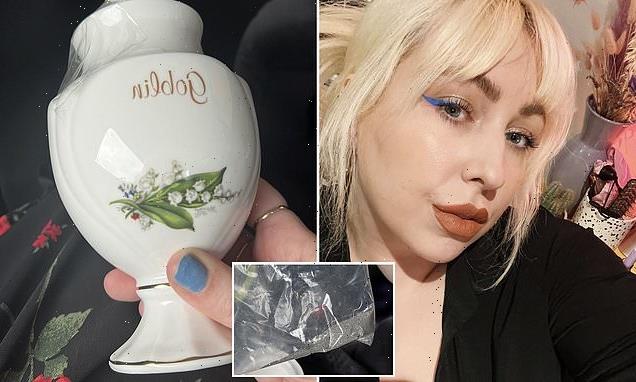 A woman who bought what she thought was a fun trinket at a charity shop discovers she could be cursed.

Taking to Twitter to share her worries, ‘Gina Tonic’, from Manchester, got quite the shock after discovering that a dinky ornament emblazoned with the word ‘Goblin’ actually contained ashes.

The ornament, that had taken her fancy in the Altrincham charity shop had seemed like an innocent purchase at the time.

But when she got home she discovered the jar was in fact an urn, and the thought that it could be haunted crossed her mind. 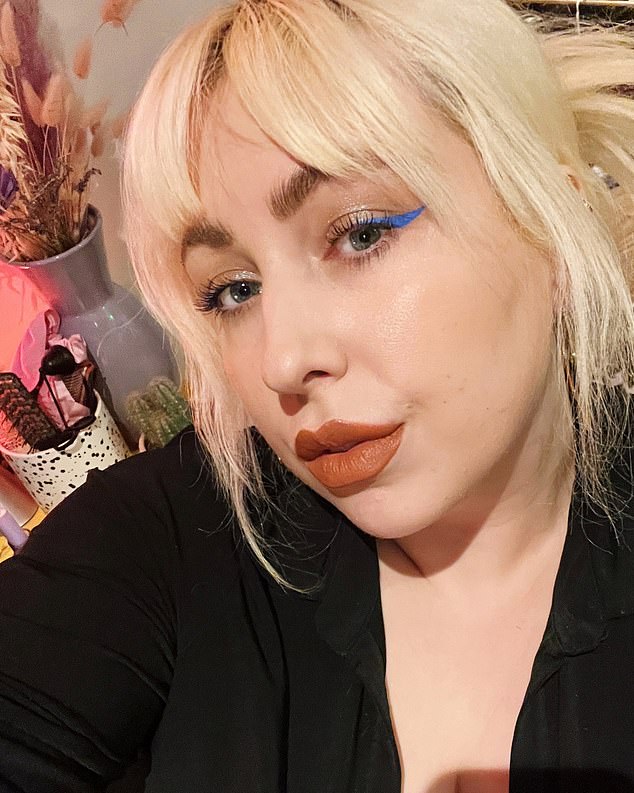 Gina Tonic, from Manchester, discovered that a trinket she’d purchased from a charity shop could actually have been cursed when she took it home 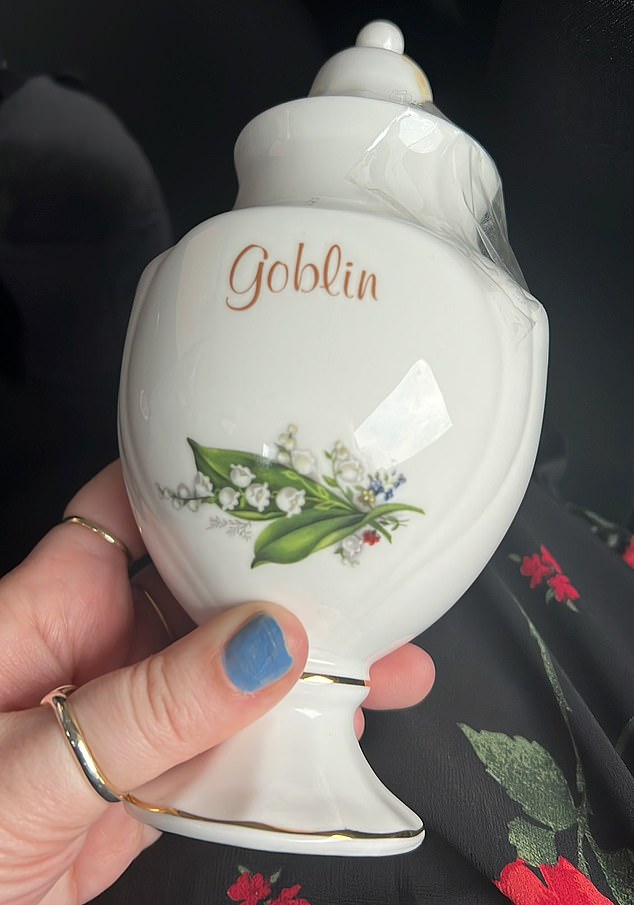 The urn, that was emblazoned with the name ‘Goblin’ was pictured up by Gina after she saw it and it made her laugh 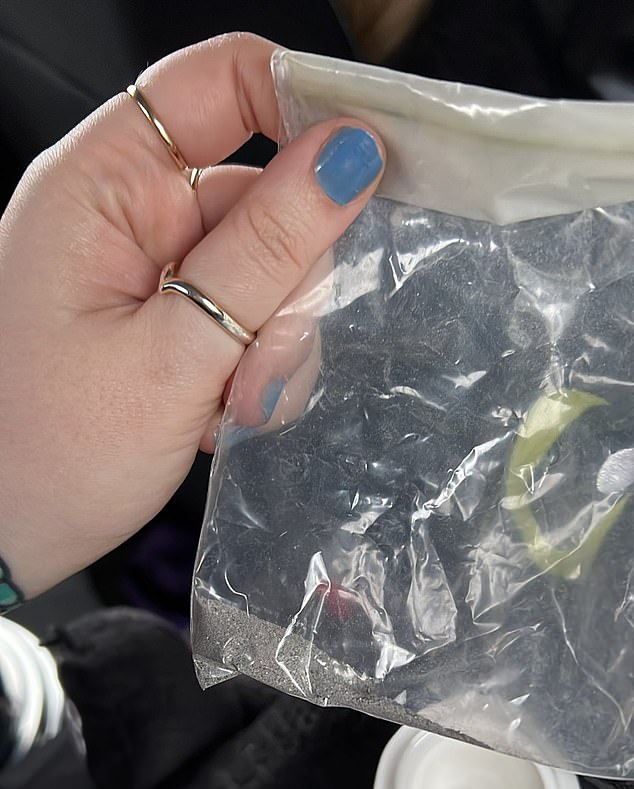 When she got home however, she was startled to discover it contained ashes and she hoped she wasn’t now cursed

Taking to Twitter, the new owner of the urn informed her followers that she thought she was ‘cursed for life’

The ashes, which were inside a plastic bag, were small in quantity which indicated they were from an animal.

Taking to Twitter to share her worries, Gina said: ‘Oh my GOD i just bought this little trinket in a charity shop coz it made me laugh it said goblin on it (there was a merlin too) and i’ve just opened it and there’s f****n ASHES INSIDE that’s it i’m cursed for life now aren’t I?’

Her followers, astonished by her fanciful and potentially creep find, weren’t much comfort but suggested some actions she should take next.

One person said, ‘Oh no you’re going to be haunted by that animal, like in pet sematary! maybe you should take it back & explain, it might have been donated by mistake – at least it’ll get the accursed object out of your house.’

Gina’s followers were worried fr her, and immediately started giving her instructions on what to do next 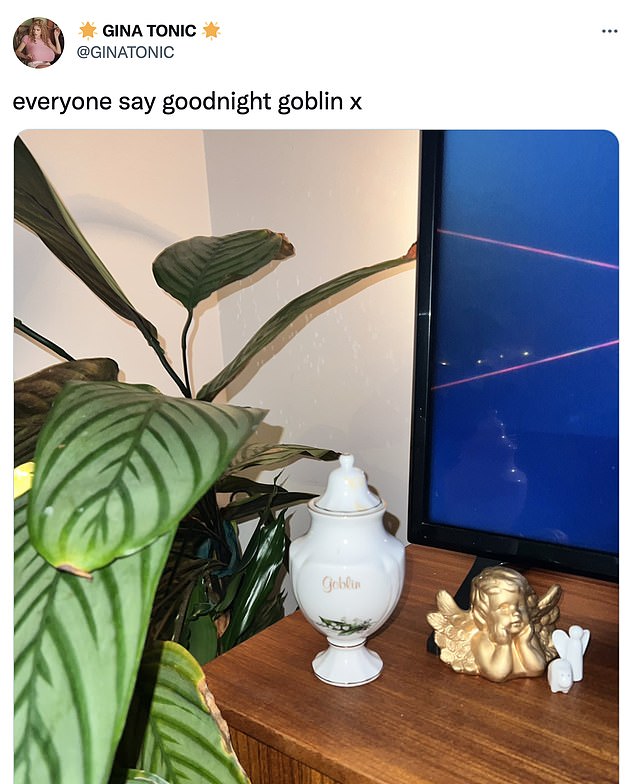 After deciding there was not much to be done, Gina found Goblin a pride of place on her TV stand

Another, fearing Gina might be now cursed for separating Goblin’s ashes from their companion said: ‘Go back for Merlin and bury them ASAP.’

A third person hoped the name, Goblin, was not eponymous for an actual creature, saying: ‘Oof, impromptu burial on the cards, you didnt put goblin in a charity shop, that must absolve you of any hauntings surely, i just hope goblin was a name and not a description of contents.’

Gina, who had only been visiting Altrincham at the time could not go back for Merlin so instead decided to settle Goblin on her mantlepiece and bid her followers to wish it a good night.

However, a follower who fancied reunited the two souls went to the charity shop themselves to buy Merlin and sent a tweet to Gina asking what to do next.

Gina, who had already expressed interest in getting both sets of ashes back together, replied saying: ‘OMG we need to reunite them.’ 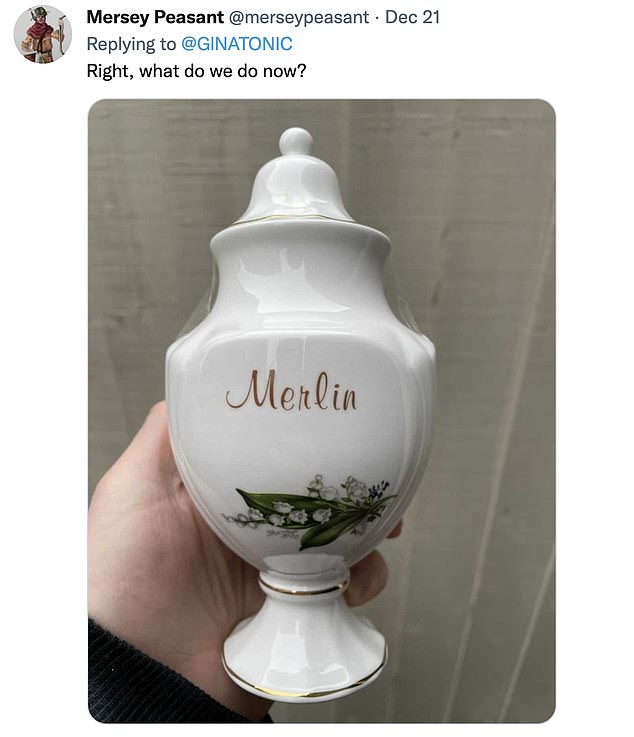 A follower who lived in Altrincham went to the original charity to retrieve Merlin, Goblin’s companion