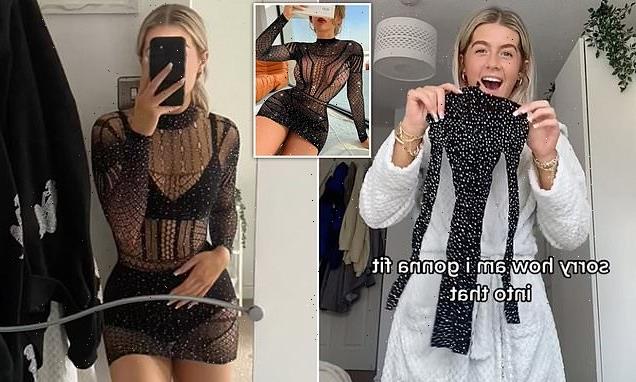 Teenager who ordered £7.49 Shein dress surprises herself by squeezing into the tiny doll-size garment – but admits it’s too racy for everyday wear!

A woman was left stunned after ordering a dress online, only for a tiny item to arrive that looks small enough to fit a ‘doll.’

But when it arrived, she found that the dress was incredibly small and seemed unlikely to stretch to fit her size XS/S frame.

The fashion enthusiast managed to squeeze herself into the dress, but admitted it was a bit too X-rated for everyday wear.

Meanwhile people on TikTok, where Lucy shared her story, were left in stitches as they watched the fashion fail unfold. 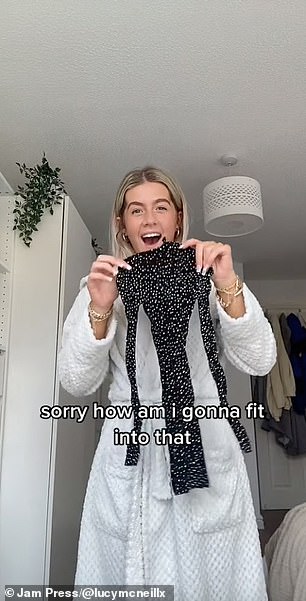 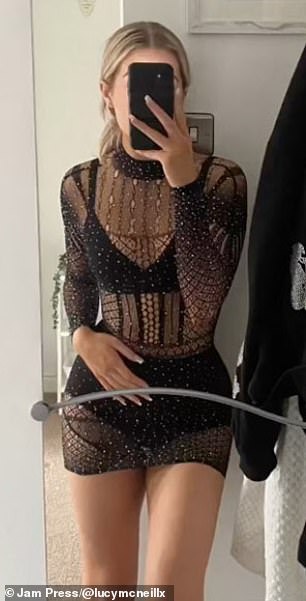 Lucy McNeill, 17, from Cheshire, selected a long sleeve black mini dress from online retailer Shein, paying £7.50 for the trendy piece. However, she was left in stitches when the dress arrived and looked like it was designed for a doll

The 17-year-old bought the rhinestone studded cut-out mesh dress, and while the number is form-fitting, she did not expect to receive such a tiny garment.

‘I was completely shocked,’ she said.

‘I did not think in the slightest that it would fit me.

‘I was able to get it on and it did in fact fit,’ she added. 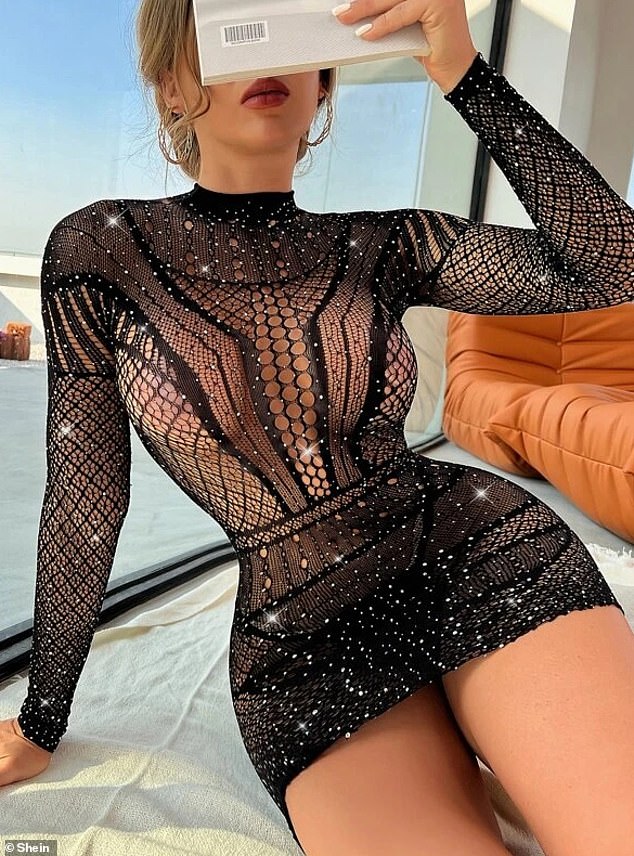 The mini dress is available on the Shein website for £7.49, While it is meant to be form-fitting, Lucy was not expecting it to look this small 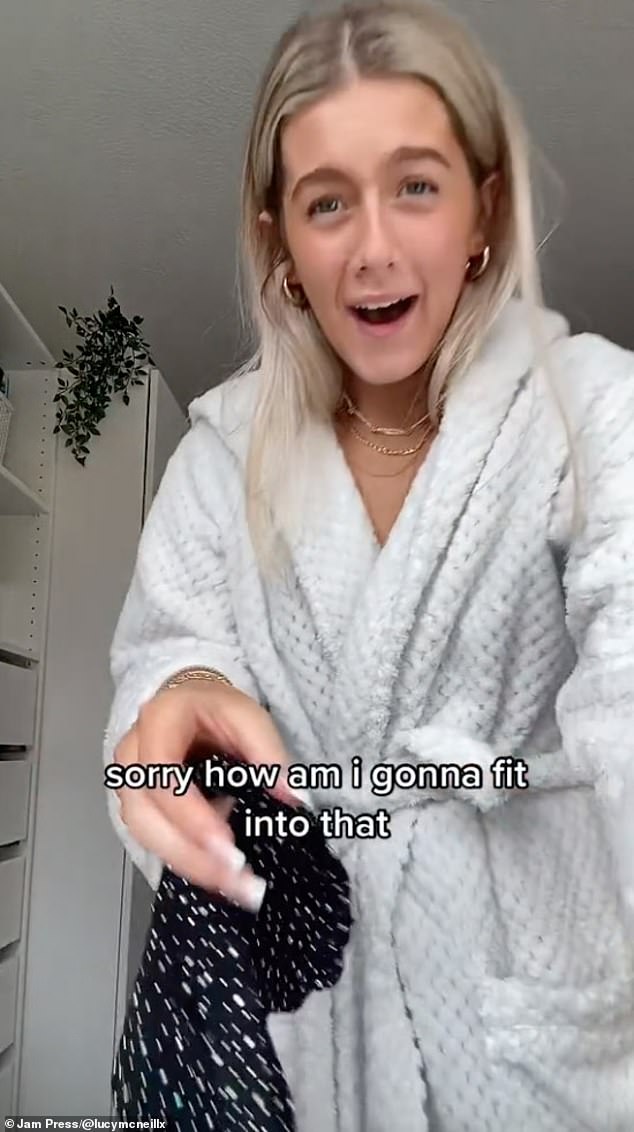 In a hilarious video shared on TikTok, Lucy showed the difference between her frame and the size of the dress she had ordered

‘But it’s not something I would want to wear out.’

She shared a hilarious clip of her holding it up to next to herself on TikTok, demonstrating the size difference.

Her face showing how shocked she was, she said: ‘Sorry how am I gonna fit into that?’

The post was viewed 33.9 million times and racked up two million likes.

One person commented: ‘That’s so funny, you made my day with this thank you

‘No way,’ another user said. 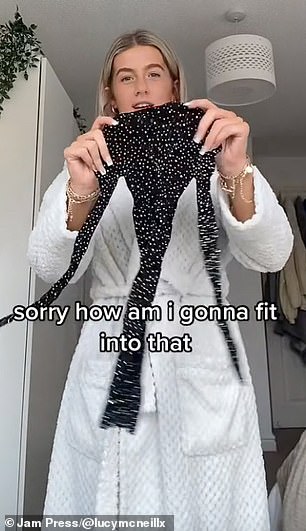 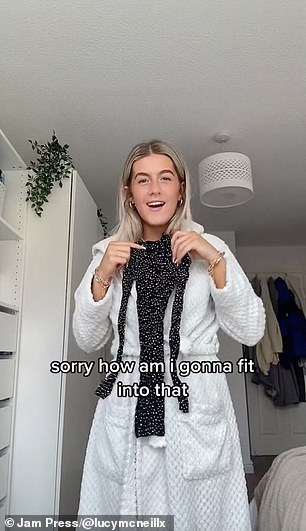 Lucy showed the size of the dress to the camera, holding it in front of her body. She seemed convinced it would be impossible for her to put the dress on

Someone else added: ‘Please tag me if you get this on. I need to see this

One person commented: ‘It’s for a Barbie doll.

‘Game changer for travel packing, you can get cheaper flight with luggage this small,’ someone else joked.

Another user quipped: ‘Omg where did you get that my American girl doll would love that. 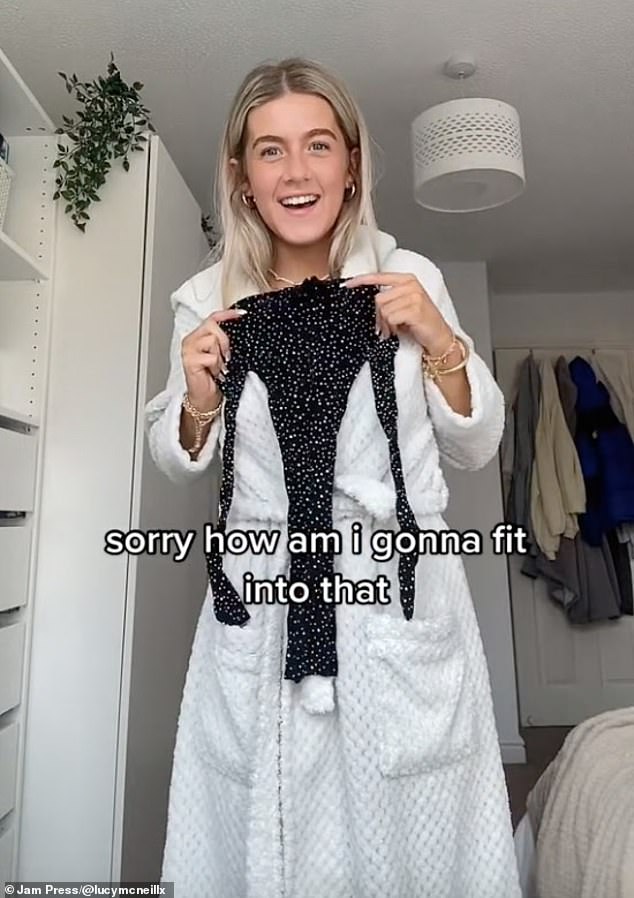 After her initial video, Lucy revealed what the dress looked like on her after she managed to squeeze herself in. She deemed it too x-rated for her liking

Lucy later shared another video of her wearing the skimpy dress, which stretched all over her body, leading her to joke it’s ‘not very PG at all.’

And while she had doubts about how the outfit looks, TikTok users agreed it was not that bad after all.

One follower commented: ‘Wasn’t expecting it to look like that, looks good thought’

‘Maybe not PG but it looks incredible,’ said another user.

Someone else added: ‘It looks so good on as well how on earth did you manage that?’

People were left in stitches on TikTok as they watched the Tiny Dress fashion fail unfold. But some said the dress ended up looking amazing on Lucy