Woman, 23, whose weight dropped to 6st after mystery conditions left her vomiting 30 times a day reveals school bullies left her suicidal by accusing her of lying about illness

A woman who suffers from multiple health conditions which make her vomit 30 times a day has revealed how she was left suicidal after school bullies accused her for ‘faking’ the illnesses.

Beth Gallery, 23, from Preston, fell ill with an invisible disease at the age of 12, but it was six years with specialist doctors before she was diagnosed – leaving her malnourished body weighing a measly 6st 2lb and needing a feeding tube to keep her alive.

She was diagnosed with gastroparesis, which means her stomach does not digest food and causes her to vomit up to 30 times a day, as well as Chronic Fatigue Syndrome and Ehlers-Danlos Syndrome.

Beth has now revealed how she had ‘lost all motivation with life’ by the age of 20 after school bullies and strangers attacked her over the invisible illnesses, revealing: ‘People called me anorexic, told me I was lying about my illness and told me they wished my illness would just kill me. I just felt like such an outcast.’ 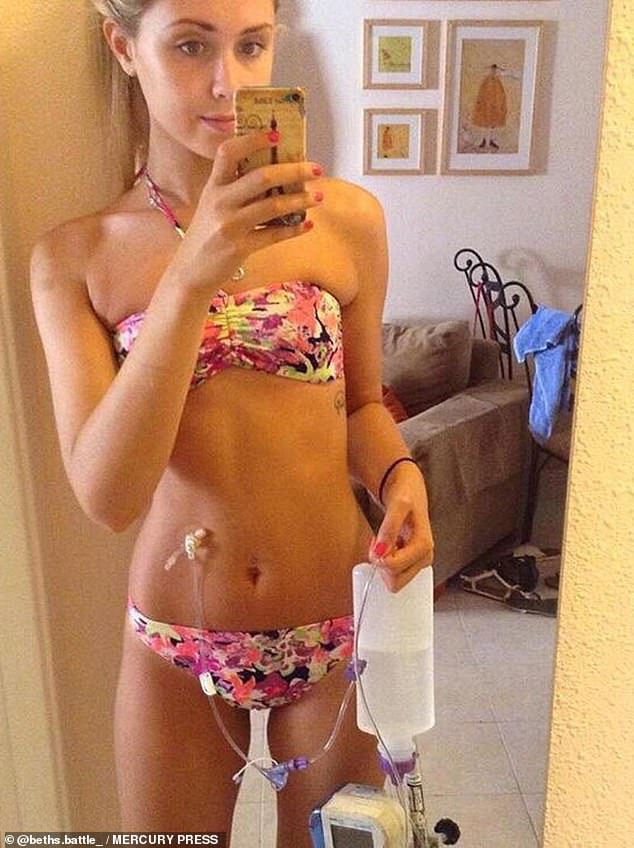 Beth Gallery, 23, from Preston, who suffers from health conditions leading her to be sick up to 30 times a day has revealed how she was left suicidal after school bullies attacked her for ‘faking’ the illnesses 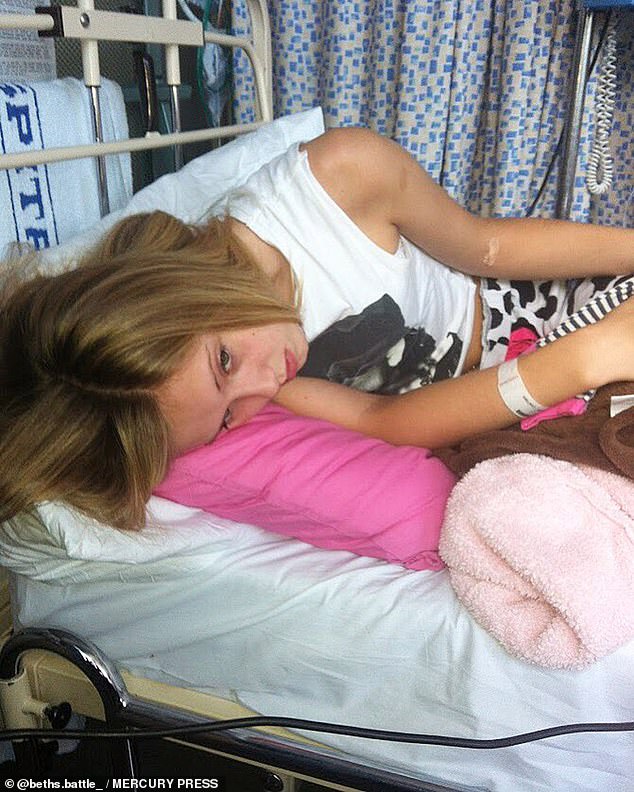 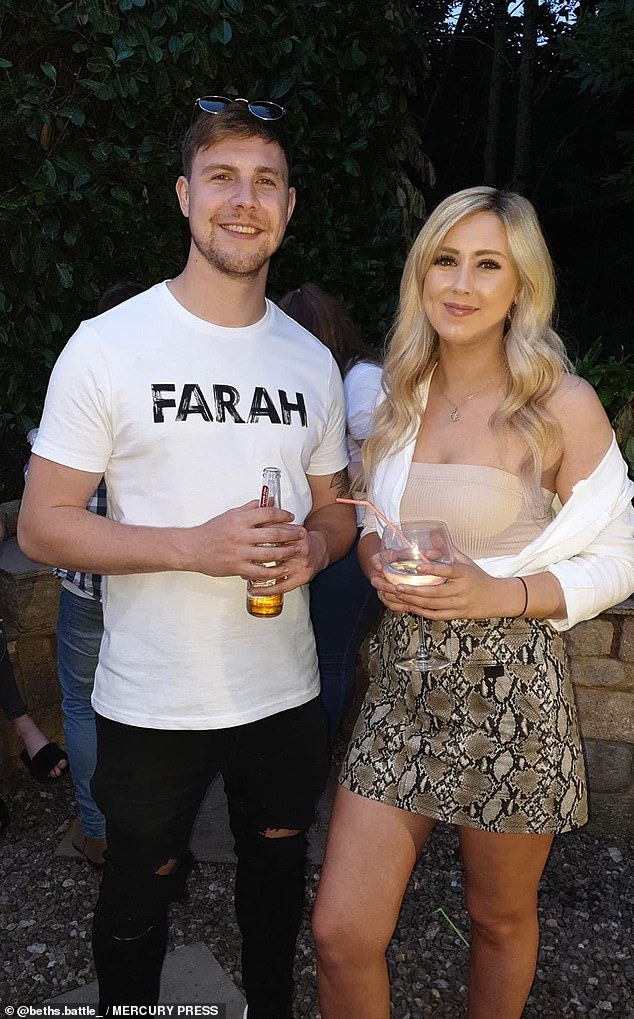 She revealed that meeting boyfriend James Jeffers, 22,helped her transform her mental health and she is now raising awareness for those with hidden disabilities

Beth first realised that something wasn’t right when she was 12, and overnight started suffering with morning sickness which soon progressed to daily vomiting.

She said: ‘When I first got sick I always assumed that I would just get better.’

As well as fatigue, joint pain, feeling full despite not eating for hours, Beth dropped to 6st 2lb and was fitted with a permanent feeding tube to get some nutrients into her body at just 16.

She explained: ‘Unless you see my feeding tube you would have no idea from the outside that there is anything wrong with me. 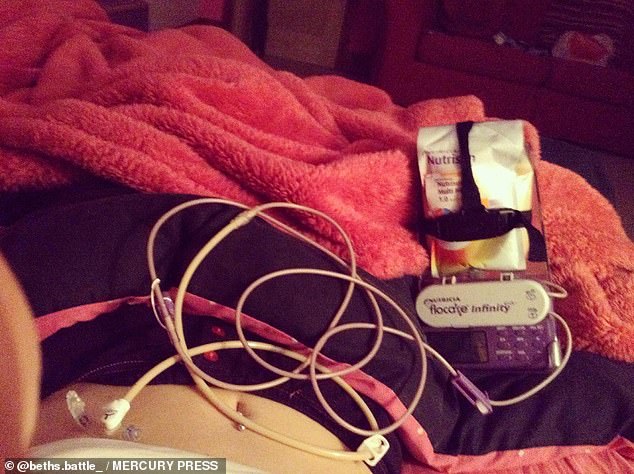 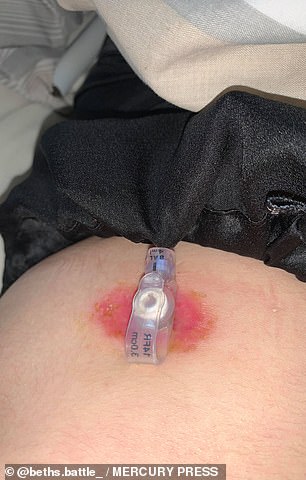 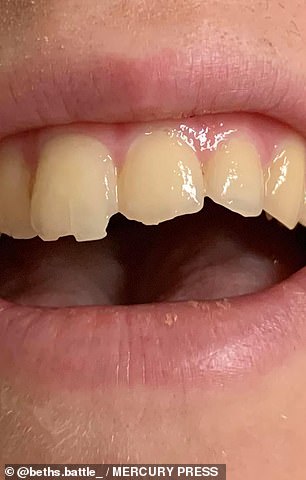 Beth said she is constantly in pain and feeling sick because of her health conditions, which mean she was fitted with a feeding tube at the age of just 16 (pictured left). Meanwhile her teeth have also been damaged from years of vomiting, leaving her smile cracked and discoloured (right)

‘I can vomit up to 30 times a day, I constantly feel sick and in pain and sometimes I get no warning before I need to throw up so I have to just do it in the street.

‘It’s really embarrassing, people think you’re drunk or if I use the disabled toilets they judge me and think I’m being selfish by skipping the queue for the women’s.’

But as well as the physical trauma of her illnesses, Beth struggled with bullying in school, revealing: ‘I got bullied in school for my feeding tube and for the way that I looked.’

She said people suggested she had an eating disorder and was lying about her conditions, leaving her at her lowest point.

Gastroparesis affects the normal movements of muscles in the stomach, preventing it from emptying properly.

It affects more than 1.5 million people in the US to some extent. Up to four per cent of people suffer in the UK.

Due to the condition affecting digestion, it can cause nausea and vomiting, as well as problems with people’s blood-sugar levels and receiving adequate nutrition.

Other symptoms may include:

Gastroparesis can occur as a complication of diabetes, or after surgery or an infection.

It is believed to be caused due to damage to a nerve that controls stomach muscles.

Certain medications, such as antidepressants or pain relievers, can slow gastric emptying and cause similar symptoms.

Complications can include severe dehydration from vomiting, malnutrition, a reduced quality of life and undigested food hardening in the stomach, which can be life threatening.

There is no cure. Treatment focuses on dietary changes, such as eating smaller meals more frequently and chewing thoroughly.

Medications can help to ease nausea and vomiting.

Surgery to fit a feeding tube may be required if patients are unable to tolerate any food or liquids.

She revealed: ‘I got to a point where I didn’t want to be here anymore. I couldn’t see how anything was going to get any better.

‘I couldn’t deal with social media and feeling like I was so different to everyone else.’

But despite countless tests and scans doctors were still unable to give her a diagnosis until she was 18.

She said: ‘I had countless tests from endoscopies, colonoscopies, tests for epilepsy and eating disorders, I went on shakes and steroids, IV treatments, but nothing worked. 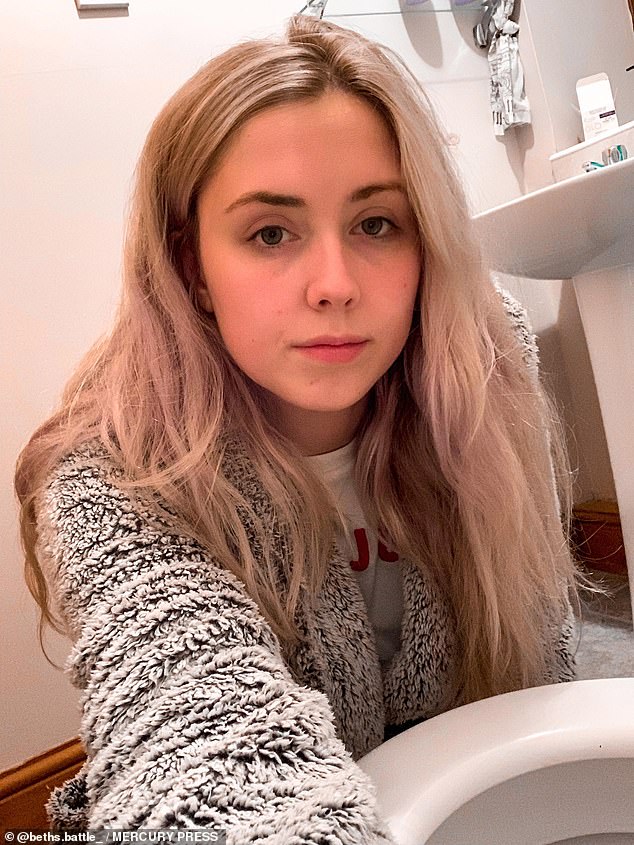 After six years, she was diagnosed with gastroparesis, which means her stomach does not digest food and causes her to vomit up to 30 times a day 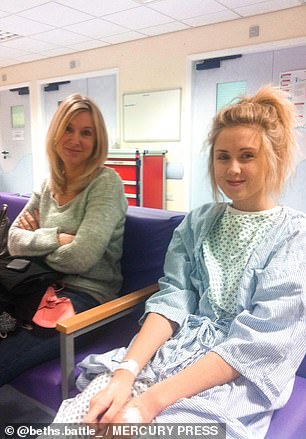 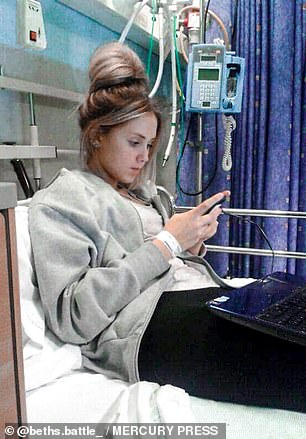 Her teenage years were filled with hospital visits and tests with specialists who could not determine the reason behind her illness (pictured, with her mother Lorraine, 52, in hospital)

What is Ehlers-Danlos Syndrome?

Ehlers-Danlos syndrome (EDS) is the name for a group of rare inherited conditions that affects the body’s connective tissue.

Different types of EDS are caused by faults in certain genes that make connective tissue weaker.

Depending on the type of EDS, the faulty gene may have been inherited from one parent, or both.

EDS can affect people in different ways. For some the condition is relatively mild, while for others their symptoms can be disabling.

Some of the rare severe types can even be life-threatening.

‘I think I went through eight or nine specialist doctors to get diagnosed.’

After six years of looking for answers, experts finally discovered she had gastroparesis as well as Chronic Fatigue Syndrome, Ehlers-Danlos Syndrome which causes pain in her joints and PoTS (Postural Tachycardia Syndrome) which affects her centre of balance.

She explained: ‘When they eventually managed to diagnose me with gastroparesis I said, “Okay so what can we do?” and he just said, “Nothing”.’

‘You always want to be diagnosed because the unknown is scary but for me getting diagnosed was as scary as not knowing because I suddenly realised I couldn’t be fixed.’ 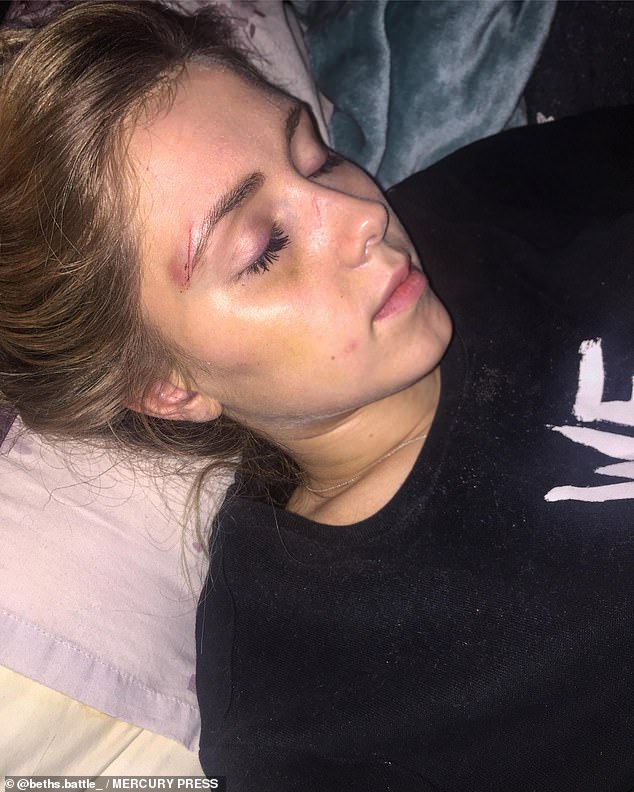 She said the impact of the diagnosis combined with the challenges she faced at school left her struggling mentally, revealing: ‘I was in denial for so long, and when it eventually started to hit me I was so low, I lost all motivation with life.’

‘I got to a point where I didn’t want to be here anymore. I couldn’t see how anything was going to get any better.

After coming to terms with her diagnosis, Beth has been able to get back to a healthy weight of 10st and start managing her illness with anti sickness medication and incorporating being sick into her daily routine.

She revealed: ‘It wasn’t until I met my boyfriend that I started to feel better about myself.’ 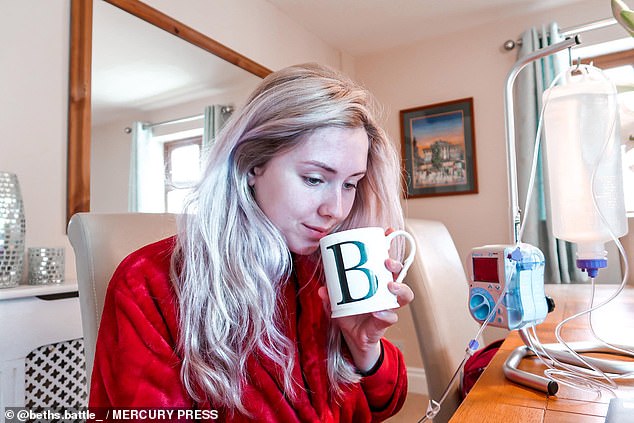 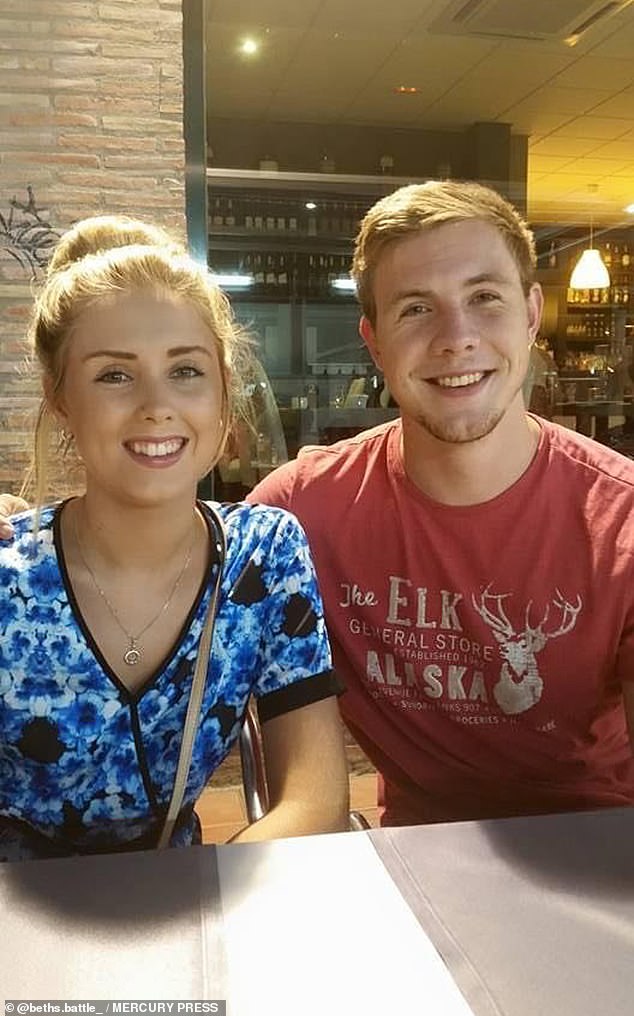 WHAT IS CHRONIC FATIGUE SYNDROME?

In many causes CFS’ cause is unclear, however, it has been linked to infections, operations and accidents.

Some patients return to full health and others deteriorate progressively, however, most fluctuate between good and bad periods.

There is no cure for CFS, with the majority of treatments to reduce symptoms being ineffective.

CFS has atrracted controversy with many doctors previously questioning whether it is a true condition.

The World Health Organization and the Department of Health recognise CFS as a medical condition.

Now, after meeting her boyfriend, James Jeffers, 22, the young blogger is refusing to let the illness hold her back and is flaunting her feeding tube on social media to show other people with chronic conditions not to be scared or embarrassed.

She has even been to music festivals and Ladies’ Day at the races, in a bid to not let anything hold her back.

She explained: ‘James tells me that my illness has made me the person I am today and he says it makes me unique and that’s why he loves me so much.’

Now Beth has set up a dedicated Instagram and Youtube page to share her story and show people on social media that having a body like a ‘swimwear model or a Love Island contestant’ isn’t everyone’s idea of normal. 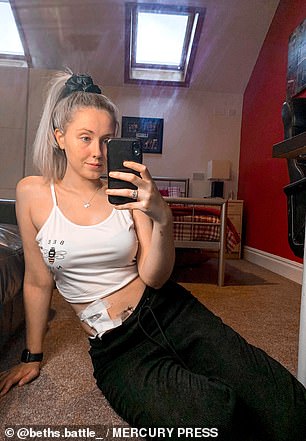 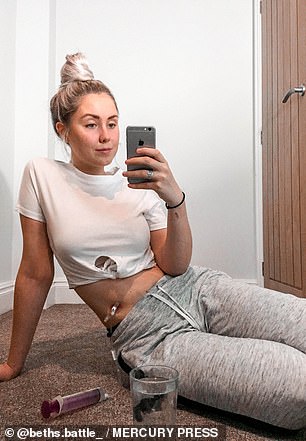 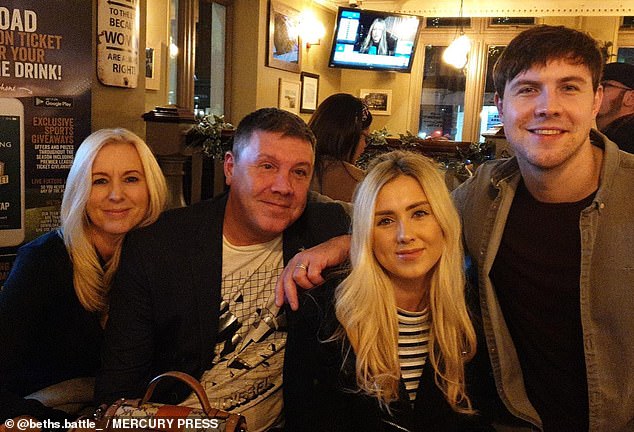 The youngster is determined not to let her disability hold her back and has even been to music festivals and Ladies’ Day at the races (pictured with her parents Louise, Paul. 52, and James at the pub)

She said: ‘Social media wasn’t like it is now, back then it was hard to see feeding tubes or anybody else who had one.

‘It’s a scary thing knowing that you’re growing up and you’re very different to everybody else so I want to show off my feeding tube so other people in this situation have somewhere to turn to.

‘Now I know it’s okay to be different – not everything is about being a size six swimwear model or looking like the girls on Love Island – a lot of young girls can’t relate to that.

‘It’s amazing and it’s helping me to help other people just by telling them things like what to pack in a hospital bag or what to expect when you get a feeding tube fitted.’ 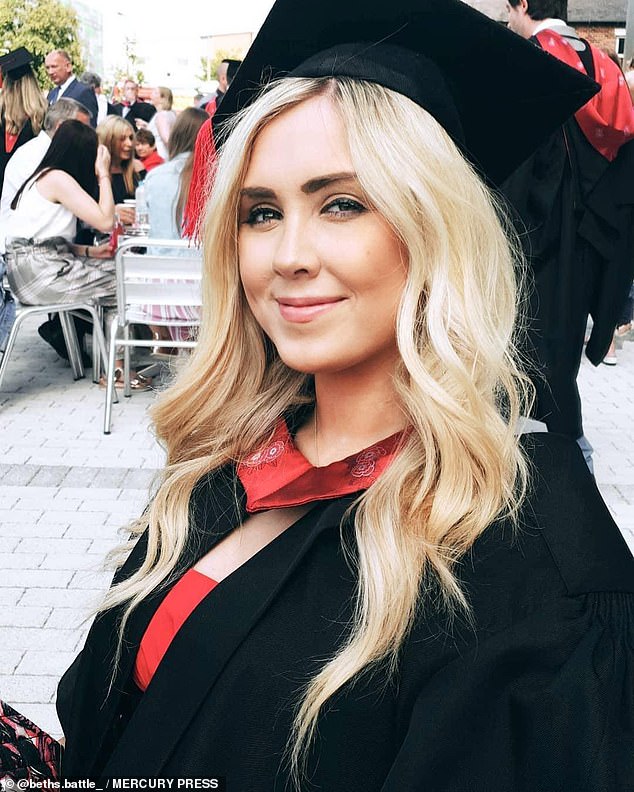 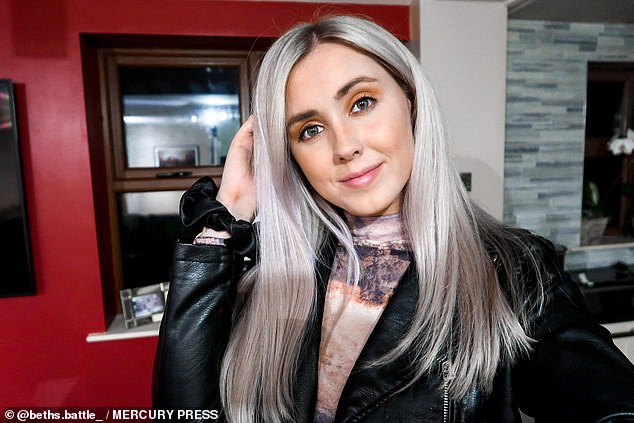