Woman transforms her childhood Georgian home last decorated by her late parents in the ’60s into a stunning modern property on George Clarke’s Old House, New Home – but admits it’s hard to ‘say goodbye’ to its history without them

A woman transforms her childhood house into a stunning modern home while working through the grief of losing both her parents on an emotional episode of George Clarke’s Old House, New Home.

Pip, 51, from West Yorkshire, will featured on the programme tonight with her husband Neil, charting the renovation the home that she grew up in, which had last been decorated by her parents, Dave and Linda Palmer in the ‘60s.

The process was an emotional one for Pip revealed who struggled to do the Georgian house justice, while ensuring that she made both her late parents proud.

As George Clarke revealed the house at the end of the programme, Pip broke down in tears, saying: ‘It was especially hard not having my mum and dad here to give their blessings over things and say it’s okay to say goodbye to that piece of it. So that was really hard.’ 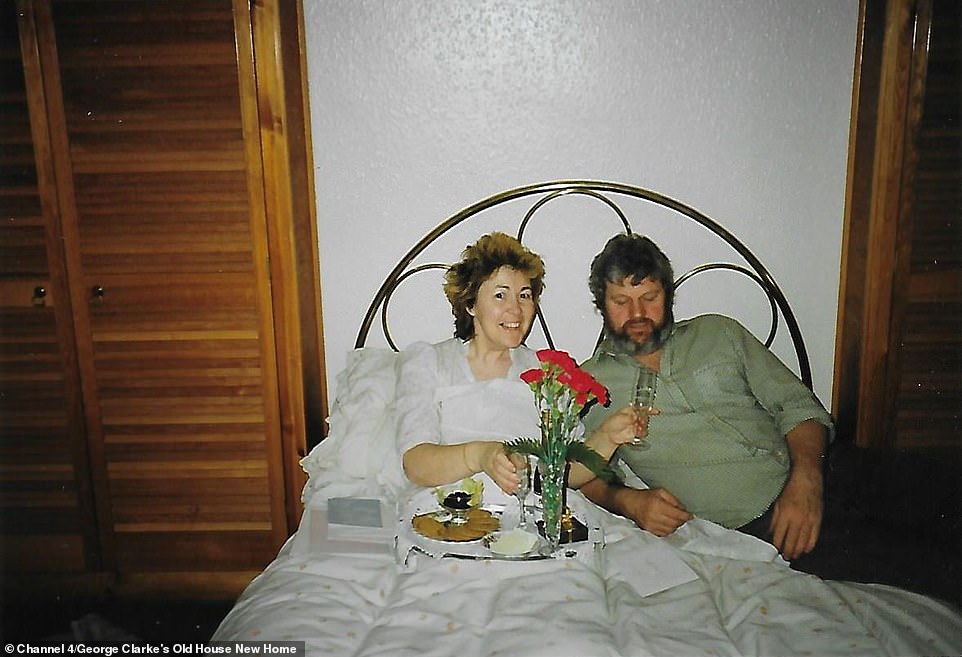 Pip, from West Yorkshire, said she was determined to do her parents Dave and Linda Palmer proud with the renovation of her childhood home (pictured, her parents in the house) 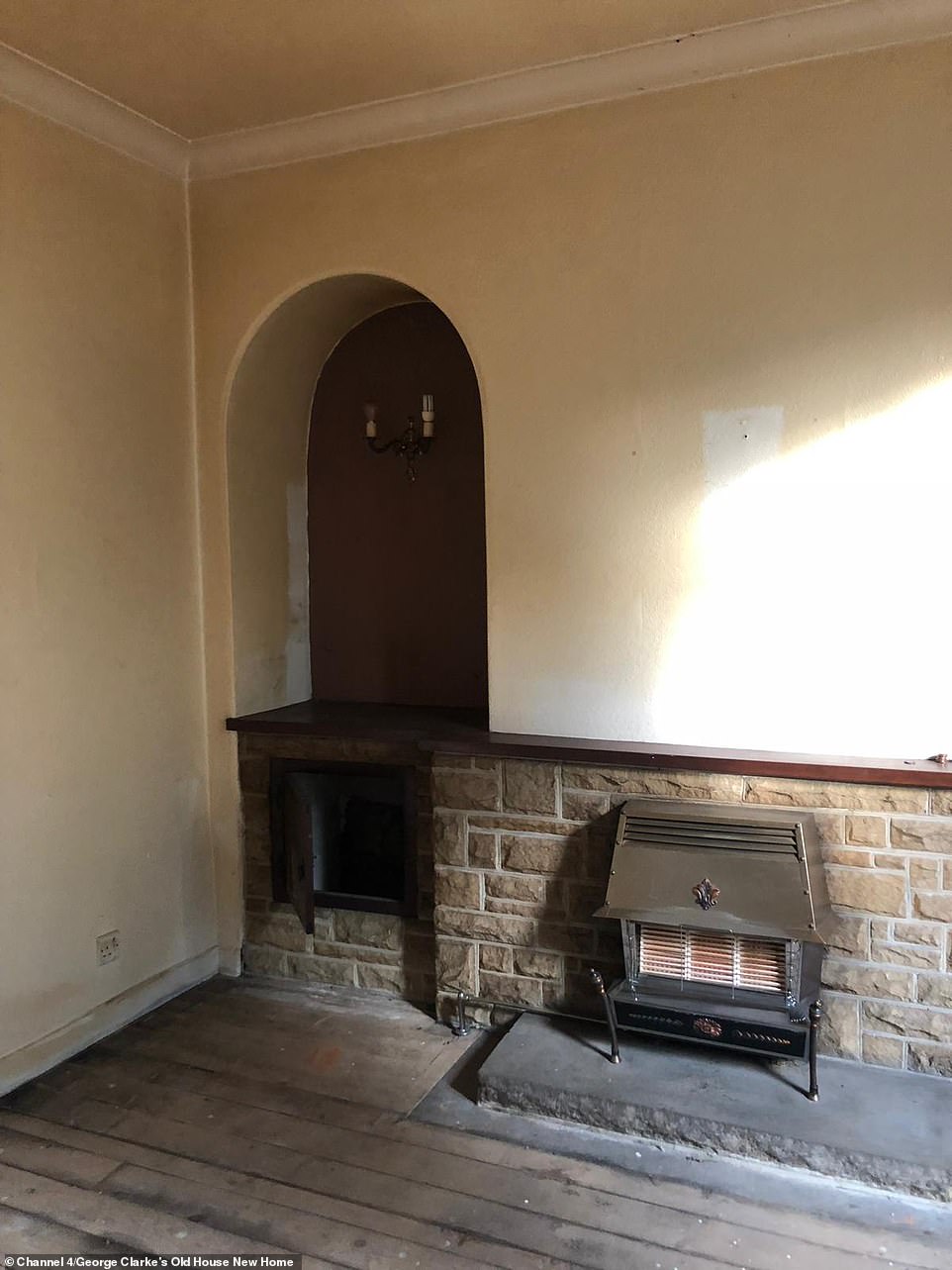 Before the renovation the house hadn’t been updated since the couple had decorated in the ’60s, and was dated and dinghy 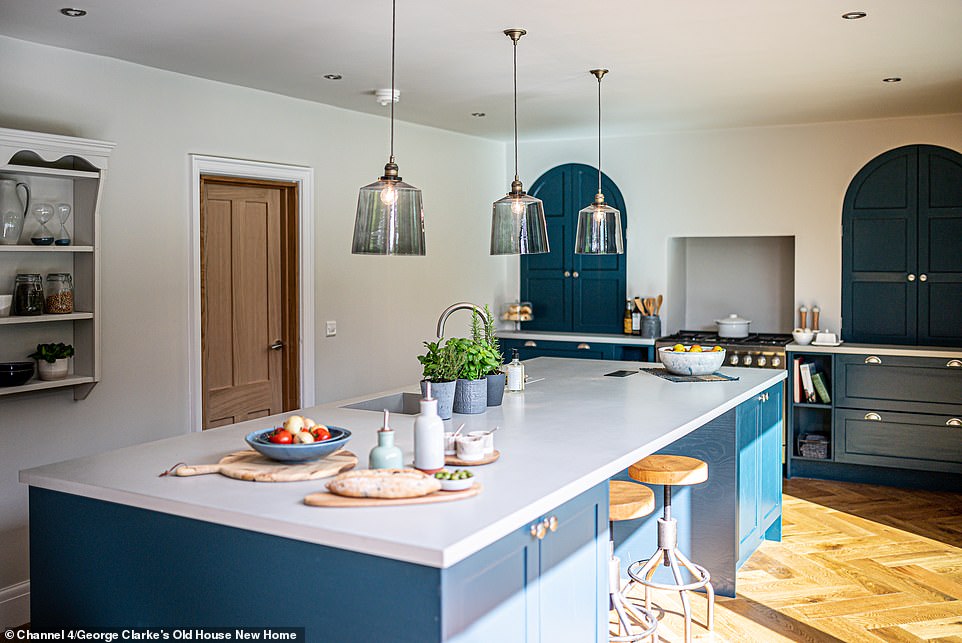 Pip’s parents bought the house in 1965, and she told George: ‘I’ve got fabulous memories growing up here.’

The Georgian property was converted into two houses in the ’70s, after Pip’s grandparents moved into the family home.

After her parents recently died, Pip became determined to renovate the house for her and her husband Neil to move in.

Neil explained: ‘You see it in the state it is now, and we think we could turn it into one fantastic family home.” 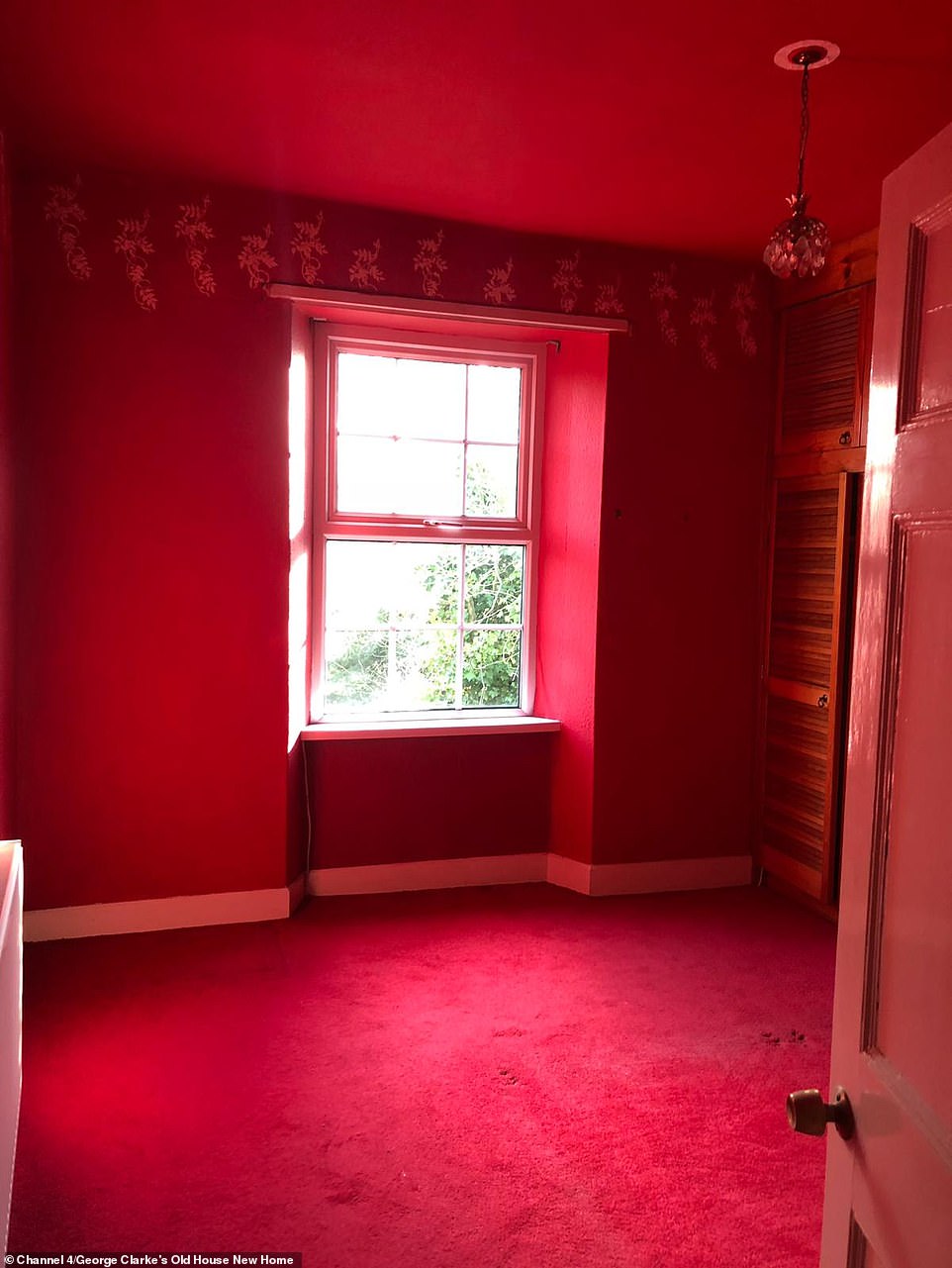 The upstairs featured several dinghy and awkward bedrooms, with one painted in a bold red colour, with a matching carpet and painted ceiling 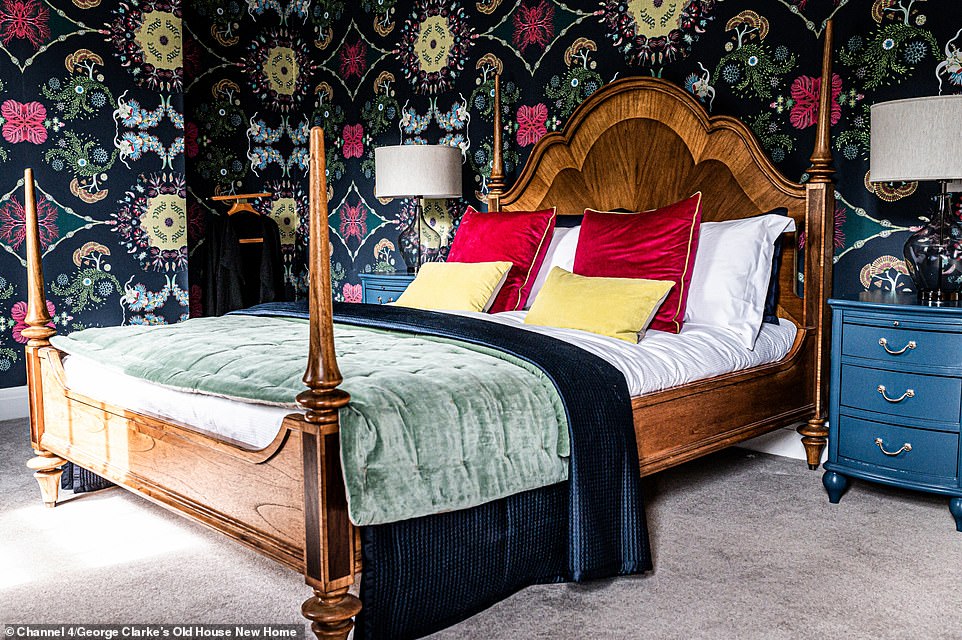 But with every room meaning so much to her, it was a challenge to know where to start.

‘It’s a challenge, it’s emotional – but it’s exciting as well,’ Pip said. ‘My dad was a joiner by trade, so the kitchen has been here 50 years. My mother and father would want it to be updated. It’s time now.’

George replied: ‘It reminds me of my mum and dads house, with the curved arches and the wallpaper.

‘If you had the chance to renovate your childhood home, it makes perfect sense that you’d want to do it some justice.’

The ground floor had been divided into two, splitting off a smaller kitchen and living room, while upstairs the house divide had left a series of dark and dingy bedrooms. 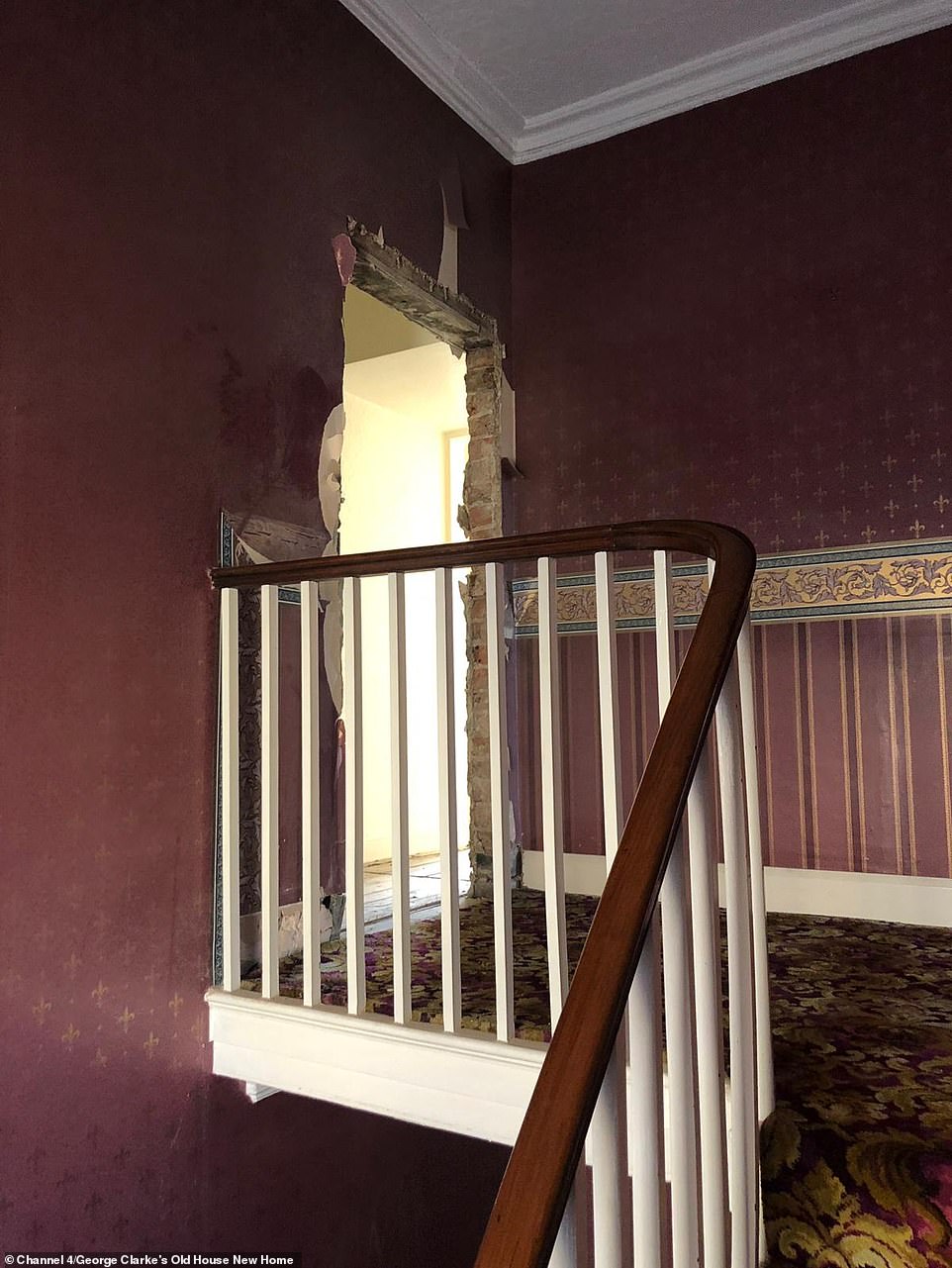 Before the renovation, the home was covered in ancient carpets and dark old-fashioned wallpapers 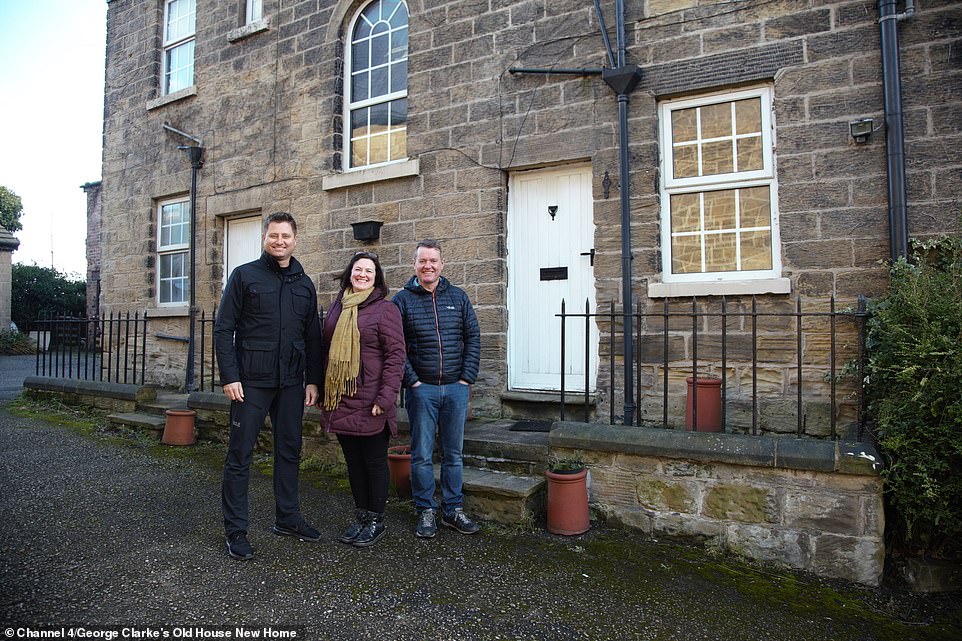 Pip is emotional throughout the build, and admits to husband Neil and George Clarke that she is feeling the pressure of her renovating her parent’s home 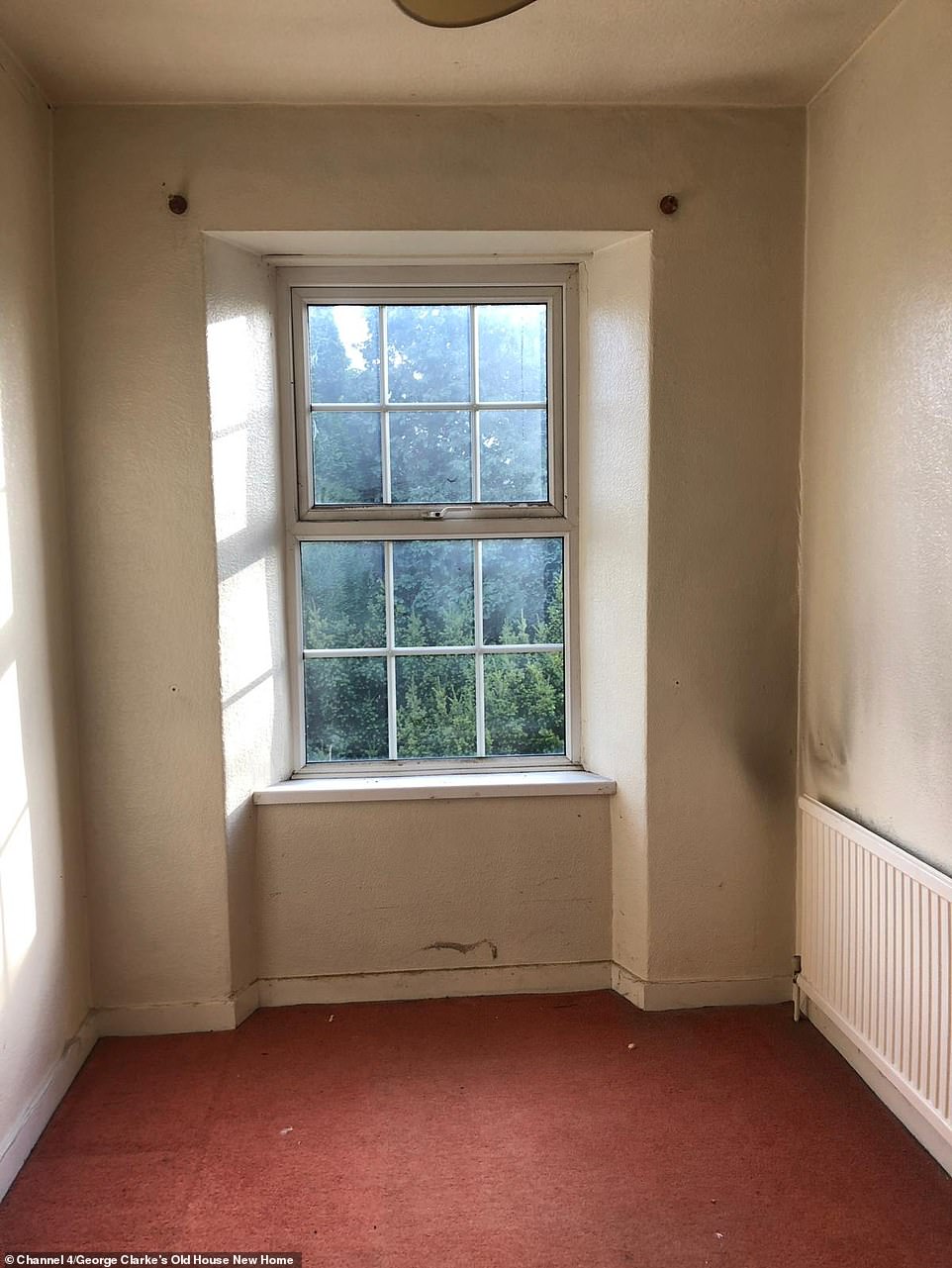 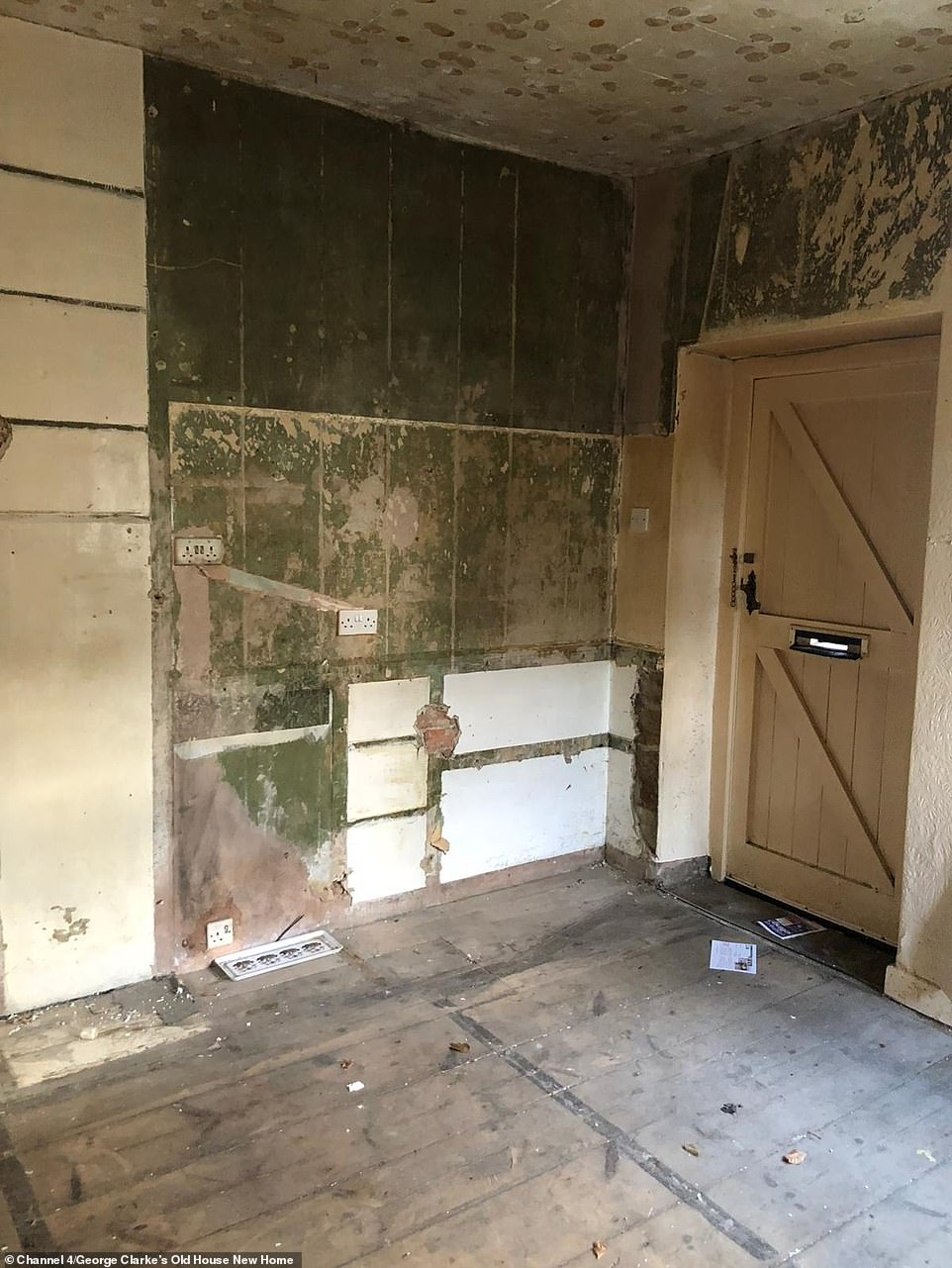 The couple started off with a budget of £100,000 for the project, but there was a lot to do to modernise and unite the two halves of the house.

Pip has to paint over her childhood wallpaper, rip up the swirly carpets, and replace the kitchen that her father hand built.

George suggested moving ‘sociable family spaces’ to the back of the house, creating one large open-plan space.

He added: ‘It’s massive. In some ways you’ve got too much space.’

Instead of the warren of rooms upstairs, the couple created four bedrooms instead, with a huge master with a walk-in wardrobe and ensuite.

They planned to create a functional modern interior while still maintaining the charm of her original family home. 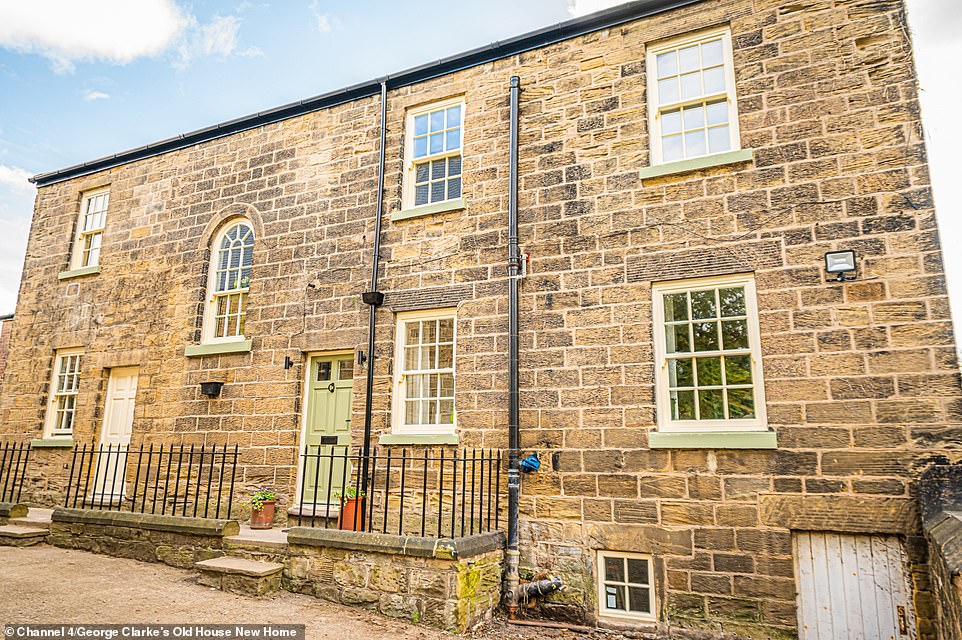 Pip transforms her terraced childhood home into a modern mansion, changing the property from two houses into one

Pip and Neil used a few tricks to get more light into the centre of the house, including putting a skylight in the roof of the stairwell.

But the renovation was anything but straightforward, since every room was packed with echoes of the past.

Pip was surprised to uncover wallpaper that was put up by her parents around the time of her first birthday.

With so much emotional pressure on her, Pip struggled to make decisions because of the ‘absolute minefield’ of memories.

She revealed: ‘I go to work and ask everybody at work, I ring all my friends and ask them, I ask all my family, and then I come home and Neil says the opposite. 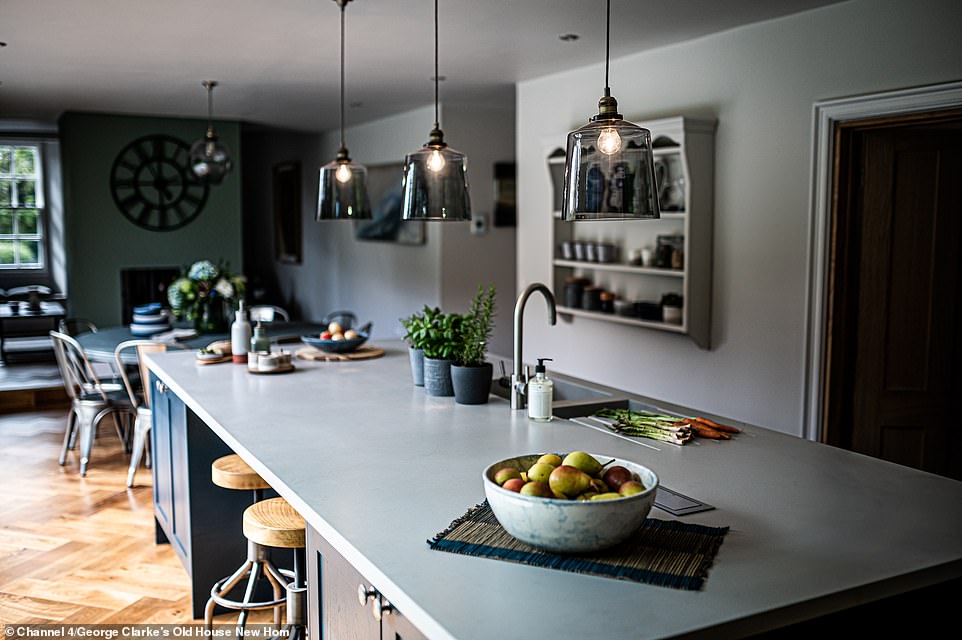 Pip is determined to make her late parents proud with her modern updates to the property, with the former kitchen being updated with a stylish modern island

She went on: ‘I cannot make a decision for the life of me.’

As a result, it took her three months to decide on a replacement for her father’s kitchen.

But she explained: ‘This house means so much to me. I don’t want to spoil it.

‘And my mum always knew what she wanted and made the right decisions in the end. I want to do the same.’ 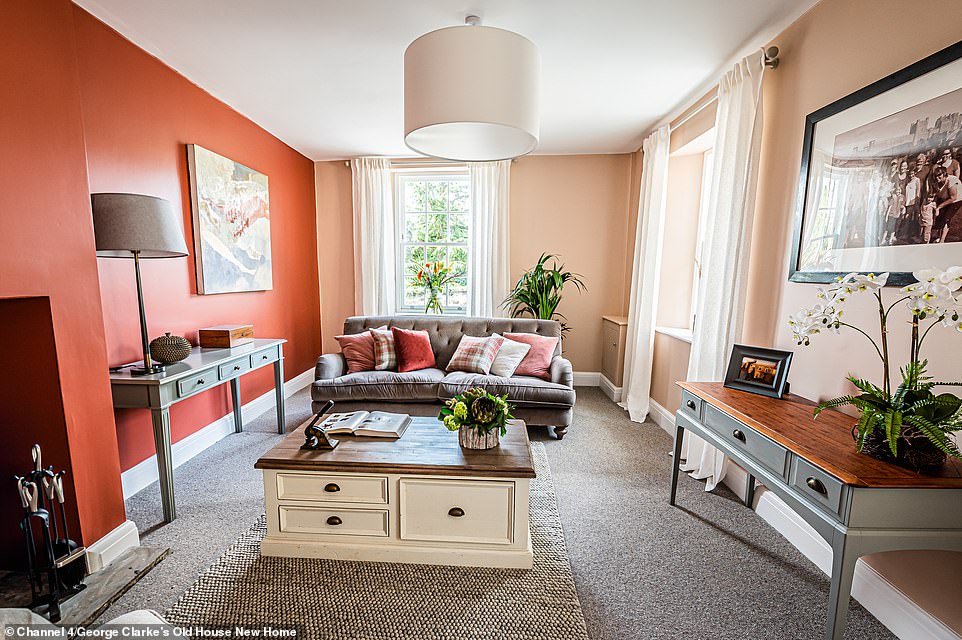 The couple’s huge home also features several living spaces, where they tried to balance the traditional style with modern updates

After five months, the couple spent a few days away from the property so that George and his team were able to add some final homely touches.

And Pip couldn’t contain her emotion as she looked around the transformed home.

The back of the property was transformed to create a large open-plan space with an enormous kitchen and sitting room flooded with light, thanks to a full wall of windows.

She said: ‘My mum would be absolutely over the moon, I love it.’ 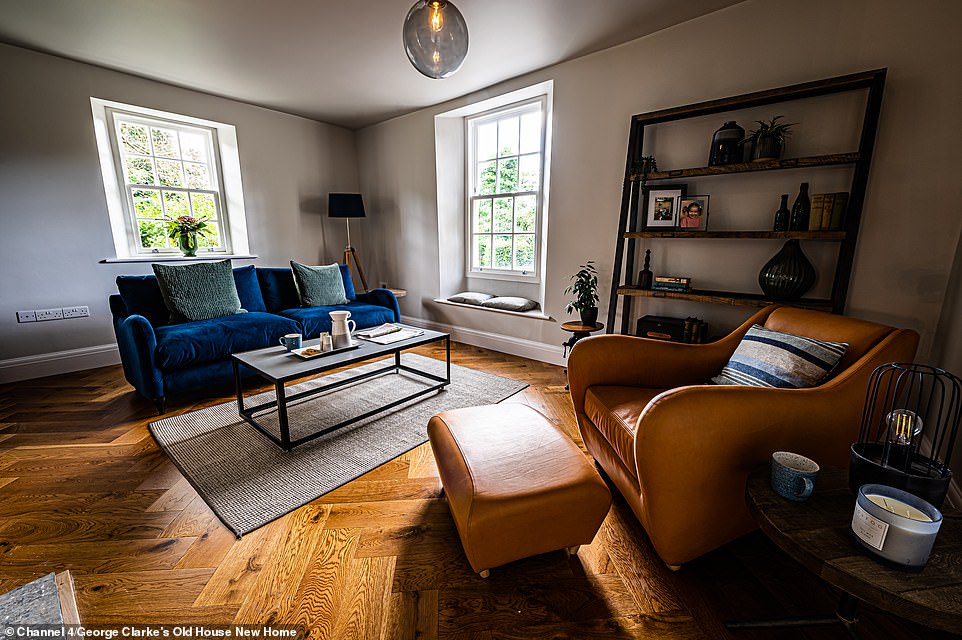 Pip is determined to keep the old charm of the building but weave in modern touches and stylish updates, such as the wooden floor in place of old carpet 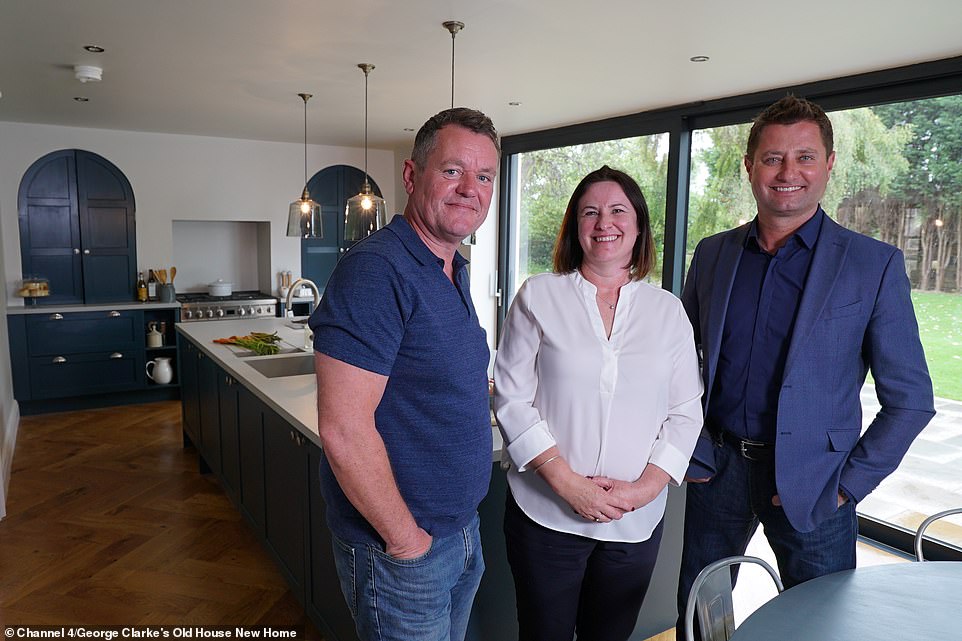 Although the couple had hoped to spend £100,000 on the property, Pip says she would ‘rather not’ disclose their total spend to husband Neil

Meanwhile the master bedroom was decorated with bright, modern wallpaper, with Pip admitting she loved it because it reminded her of her mother.

She could barely contain her emotion as George gave her a photo frame engraved with the pattern from her childhood wallpaper.

Pip said: ‘This was my mum and dad’s bedroom and she likes bright colours. My mother is here in this paper. I’m crying again.’

But when George asked Pip how much money she’d spent on the project, she admitted she would ‘rather not’ say. 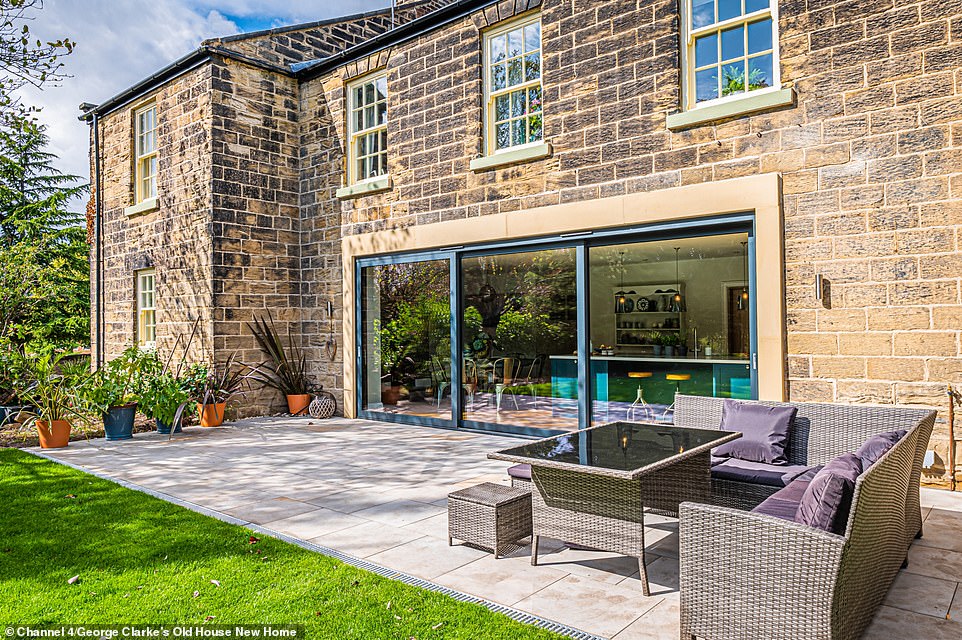 George acknowledged how difficult the project must have been for Pip, saying: ‘I think this is the first time in a long time that I’ve done a house for someone in the house that they grew up in.’

And Pip revealed: ‘It was especially hard not having my mum and dad here to give their blessings overt things and say it’s okay to say goodbye to that piece of it..so that was really hard.

She adds: ‘But I know they’ve given their blessing.’