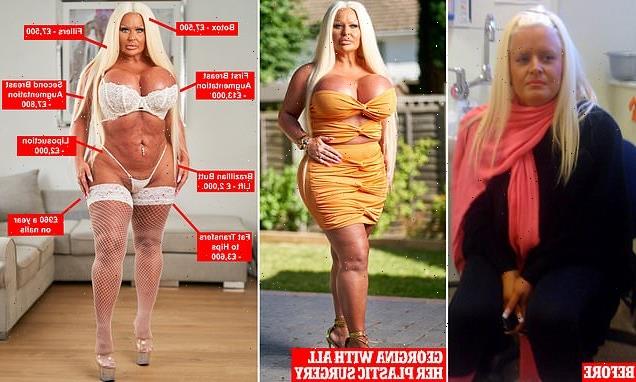 Woman, 39, who was tired of ‘blending into the background’ has spent £43,000 transforming her body with plastic surgery – including boosting her breasts to 34KK

A plastic surgery-obsessed woman has spent £43,400 transforming her body so that she can feel ultra confident when she hits 40.

Georgina Epitropou, 39, from Crawley, West Sussex, wanted to transform herself from a normal girl who blended into the background to a confident woman who stands out from the crowd.

After multiple boob jobs, liposuction, a Brazilian butt lift, filler, and Botox, Georgina has spent £43,000 on turning herself into a real-life doll.

With 34KK breasts, Georgina is delighted that she is going to look and feel amazing in time for her 40th birthday. 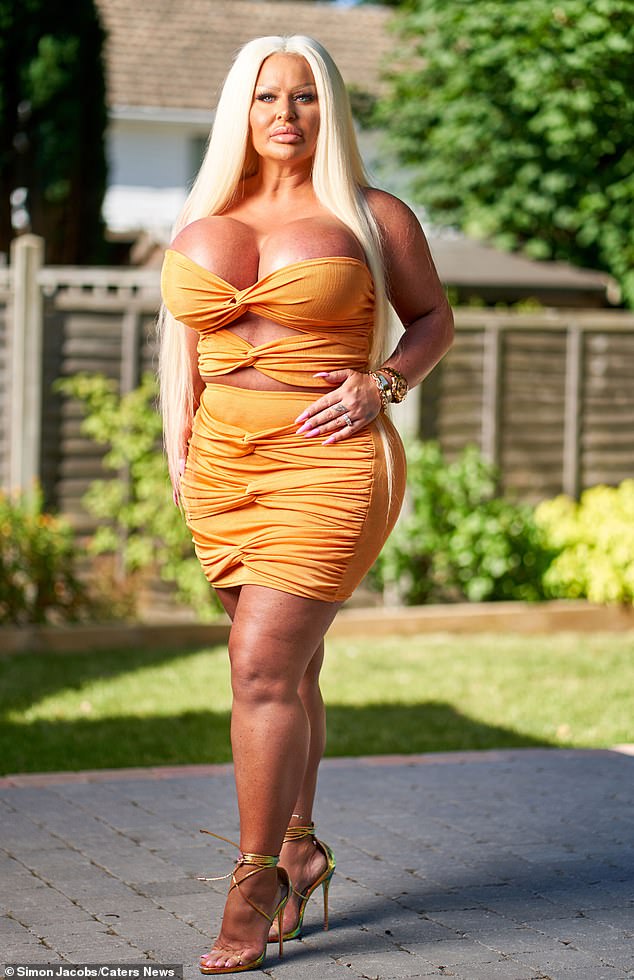 She said: ‘My idol is Pam Anderson.

‘I’ve been obsessed with her look since I first watched Baywatch and always knew there was a specific look I wanted to achieve when I began my transformation in 2015.

‘I wanted to look my best as I progressed through my thirties. 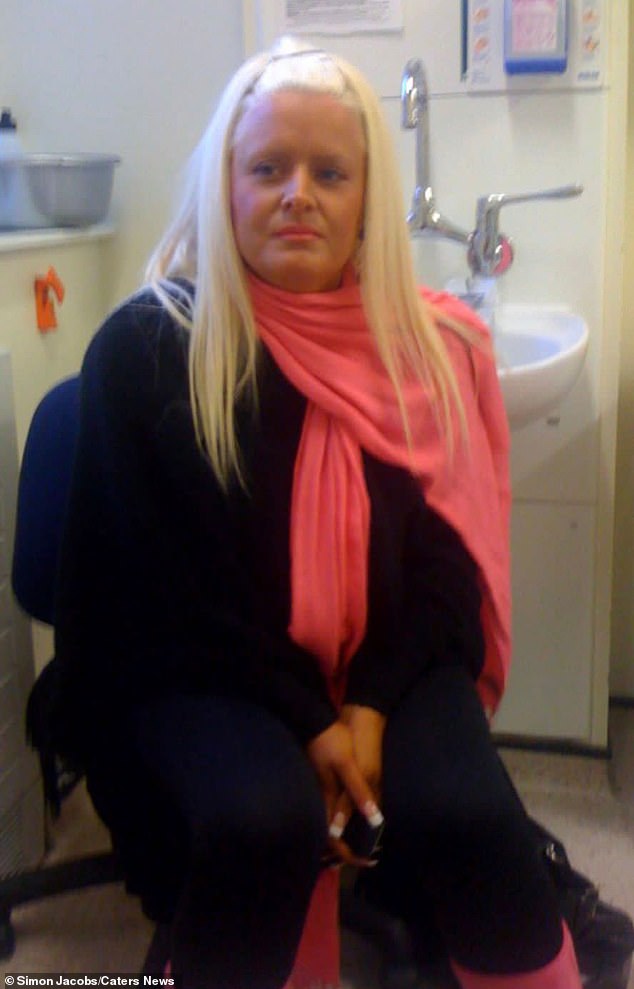 Pictured: Georgina before she started her body transformation journey. She revealed she wanted to ‘stand out’ 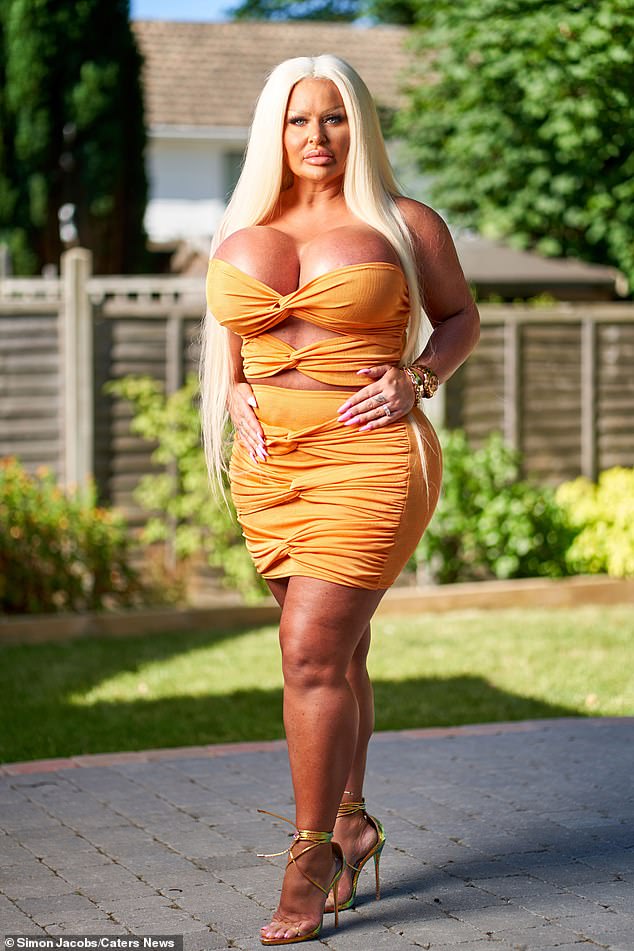 Georgina is not unrecognisable from her former self after spending more than £40,000 on cosmetic treatments

‘I didn’t want to look the same as everyone else, I wanted to stand out.’

‘So I had the rest of my surgeries abroad as they’re more open-minded. I couldn’t have achieved the look I wanted to in this country.’

Left: Georgina before and right, the plastic-surgery enthusiast now. She had her first breast augmentation surgery in 2017 in the UK 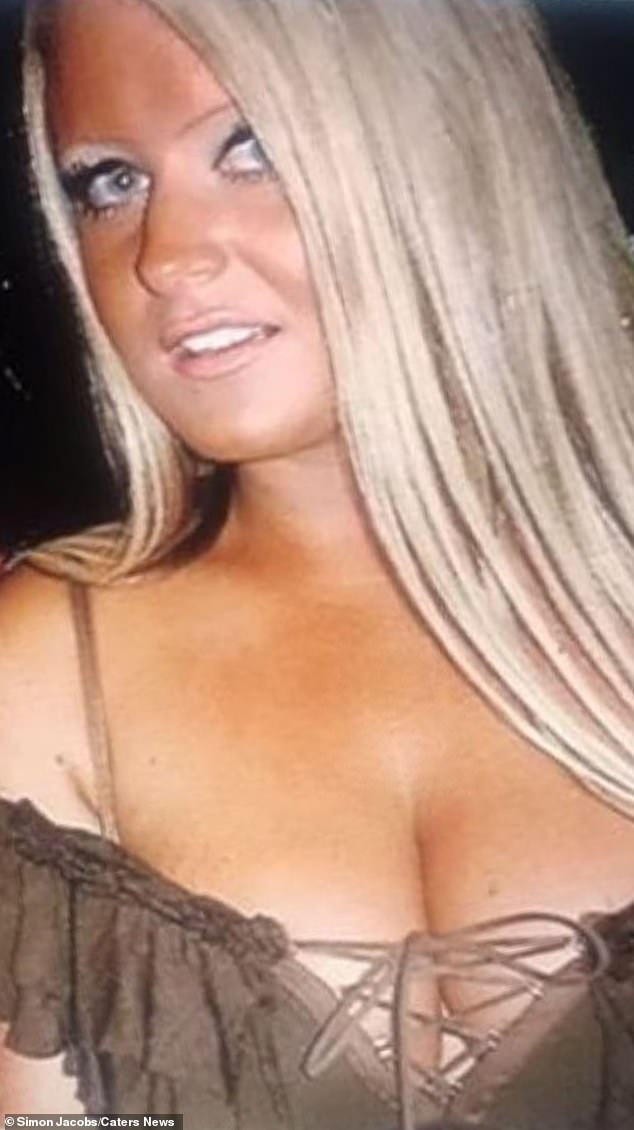 Georgina said she’s ‘always been confident’ and an extrovert, but didn’t feel she was being ‘looked at’

Georgina says she has always been an extrovert and would experiment with her mum’s make-up from the age of six.

She added: ‘Although I’ve always been confident, I was just a normal girl and didn’t really get looked at.

‘I just blended into the background and that’s not what I wanted my life to be like.

‘I became fixated on wanting to transform my look and achieve my dream body.

‘The fixation grew greater when I became a dancer in 2015. There was also the added pressure of having to look good.

‘I feel really happy with how I look now and I’ve never regretted anything that I’ve had done.

‘I’m definitely pro surgery when it is to make you feel more confident.

‘If you’re feeling insecure about something and surgery can fix it, it will give you a better quality of life.’

On top of the £43,000 Georgina has spent on her transformation, she also has a strict beauty regime that she follows.

She says that she spent £80 per month on her nails and toenails, £300 per month on makeup, and £400 every four months on her hair extensions. 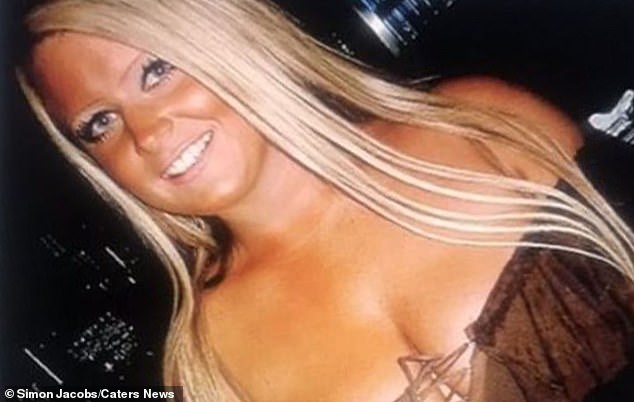 Georgina before. She now spends £300 a month on makeup, £400 every four months on hair extensions and £960 a year on her nails and toenails 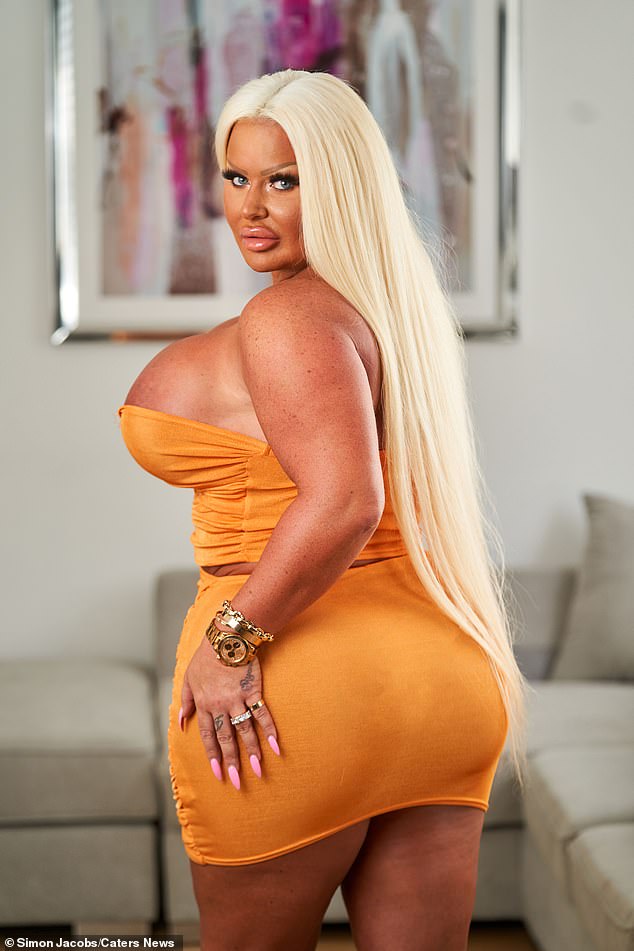 As well as her breast augmentation procedures, Georgina also had fat transfer treatments and a Brazilian butt lift

Georgina added: ‘I also get filler and Botox every three months. I get filler in my lips and cheeks and Botox into my face.

‘My friends and family always tell me I don’t need anything else, but they know that I will just do what I want.

‘When I am out and about I get lots of attention. It’s sometimes a mixture of comments, but everyone is allowed their own opinion so it doesn’t bother me at all.

‘Men usually love my look and women hate it.

‘I feel amazing about the fact that I am soon to be 40 and I look great and feel more confident than ever!’