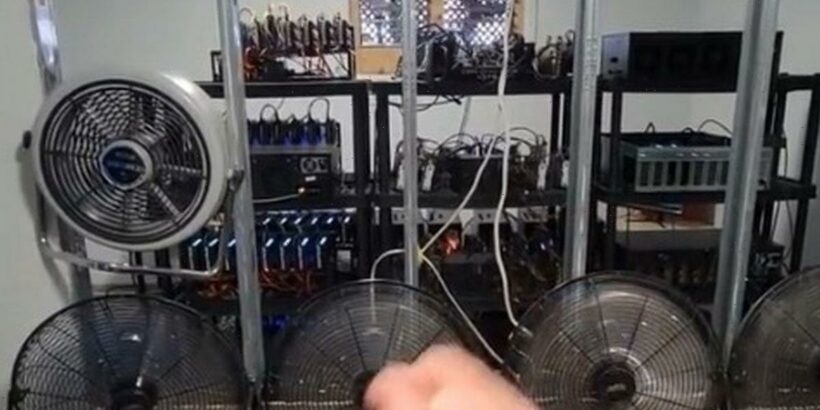 A woman filmed inside her Bitcoin-mining boyfriend's basement for a TikTok video and it probably didn't get the reaction she expected.

In the clip, uploaded on February 11 by user @firstblock, she enters the basement through a door with a security code and then explains all the features of the money-making operation that "just make sense".

First off, there's a switchboard with wires of a multitude of colours coming out of it, then on the floor, there are boxes full of graphics cards.

Because Bitcoin mining makes so much heat, she then shows the "noisy fans" whirring away on the windows.

In the bathroom, there are even more bulky boxes full of equipment.

Behind yet another row of fans is a "huge hole in the wall" full of expensive computer equipment and she also points out the security cameras that are "everywhere", as well as a huge safe in the living room.

The video was watched more than 1.3 million times and many people were critical, either moaning about the energy "wasted" or claiming there was no money in mining cryptocurrency.

One user joked: "I would rather swear a vow of celibacy rather than willingly admit I sleep with a crypto miner."

A second person argued: "Why do people think crypto is cool when it's wasting the planet and making select few people a lot of money? Crypto was a dream that didn't work out."

"That security system won’t stop me from running magnets over everything," quipped a third.

Someone else wrote: "Crypto miners: we are not responsible for the price of GPUs. also them: having like 200 GPUs."

On the flip side, one person commented on the video: "This is so interesting. Thank you."

Bitcoin is the original decentralised cryptocurrency created in January 2009 by a mysterious person known only by the fake name of Satoshi Nakamoto.

Transactions are kept on a public ledger and each one is verified by a complex mathematical puzzle that needs huge computing power – which is the process known as "mining."