In the Tinder profile, the 28-year-old put it nicely that he was not looking for anything serious.

The lad – who wrote “Hot” across his shirtless bio snap – told his lucky women he was off to prison and didn’t know how long for.

He pre-warned daters he was not looking for anything long-term – because of his situation – and just wanted sex.

And he even told the ladies he would consider a “pen pal” and described himself as a “real catch”.

“I am looking for one last proppa good f***”

In the profile, it read: “I’m not going to beat it around the bush, I’m off to prison for I do not know how long, and I am looking for one last proppa good f*** before I go on my travels.

“I’m not a c*** and I will respect ya [sic] but I am looking for a real nawty [sic – naughty] who will f*** all day and all night, obviously stopping for food and dinner breaks.

“I do apologise in advance for being so straight to the point but I can’t exactly commit to a relationship for the reason above.

“I will consider a pen pal while I’m away.” 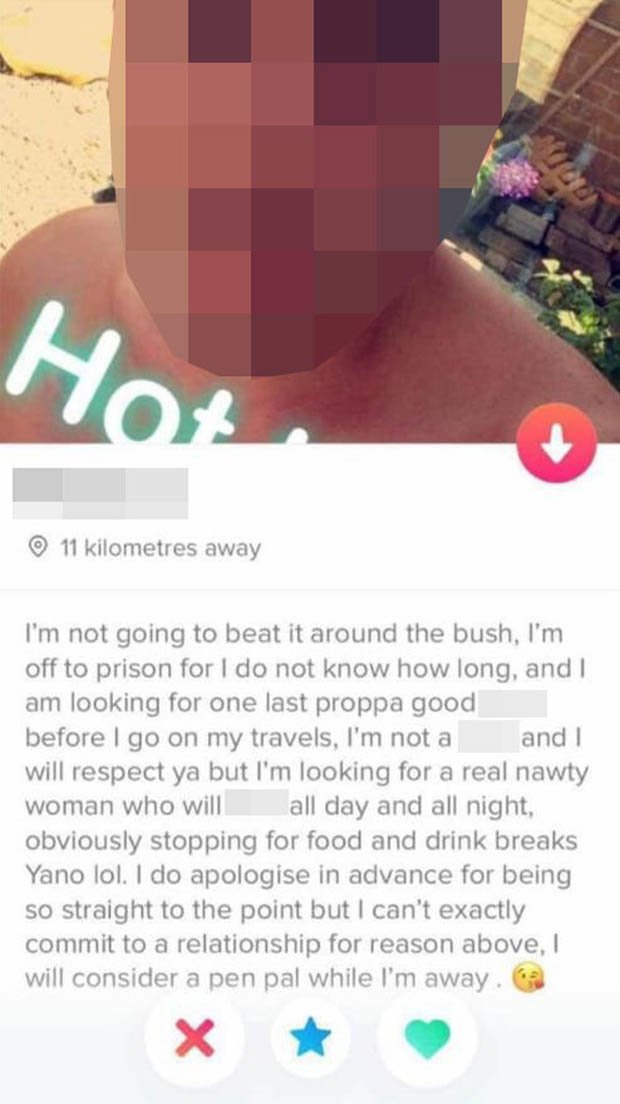 The lad’s post was shared on Twitter where it secured more than 200 retweets and 1,200 likes at the time.

Unsurprisingly, many people teased the man for his comments.

Another added: “Didn’t know stealing hearts was a prison-able offence.”

A third commented: “Seems a decent upstanding member of the community.”

While a fourth tweeted: “I think I’ve found ‘The One’.”

Others described him as a real catch, while a Twitter user begged him to stop bragging.

They said: “Oh stop boasting. We can’t all be lucky enough to grab a prize like him.”

Earlier this week, a man said women should reveal their weight on dating apps.

It came after Tinder had joked it would be imposing “height verification” rules on April Fool’s Day.

This controversial opinion came after the guy’s friend was “fat-fished” on one of his dates.