Single office worker, 27, who was labelled a ‘big girl’ moonlights as a WRESTLER – but admits men won’t date her as they find her intimidating

By day, Kimberly Benson dons a smart blouse and jacket for her job at the family coach hire firm.

But by night, the 27-year-old is body slamming opponents in Lycra and fishnets as she steps into the wrestling ring as her alter-ego: Viper: The Vixen of Violence.

Kim, from Kilbirnie, Aryshire, has spent more than a decade forging her career as a wrestler, despite being ‘written off’ by industry professionals because she is a ‘big girl’.

Wrestling has taken her across the UK and around the world, with tournaments in France, Germany, America and Japan – where she has a legion of fans. 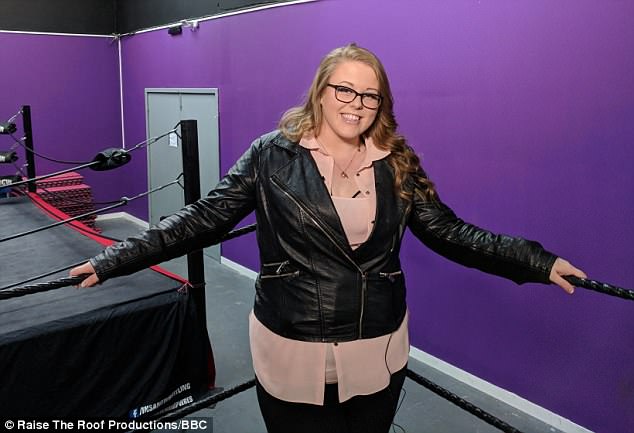 By day: Kimberly Benson, 27, from Kilbirnie, Aryshire, dons a smart blouse and jacket for her job at the family coach hire firm 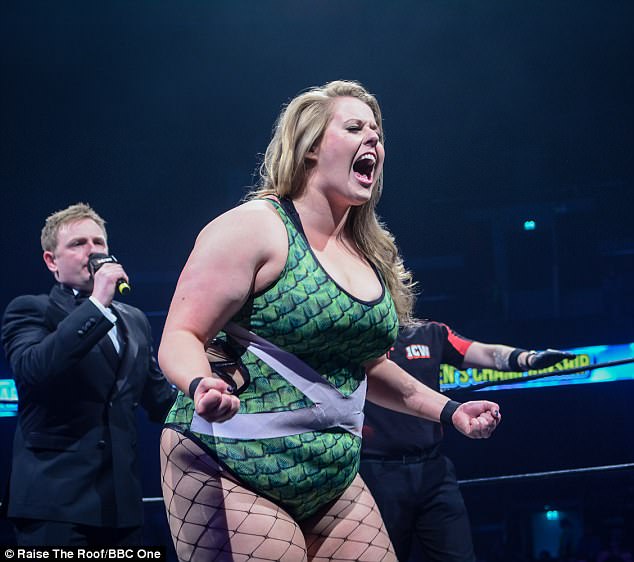 By night: The 27-year-old is body slamming opponents in Lycra and fishnets as she steps into the wrestling ring as her alter-ego: Viper: The Vixen of Violence, pictured 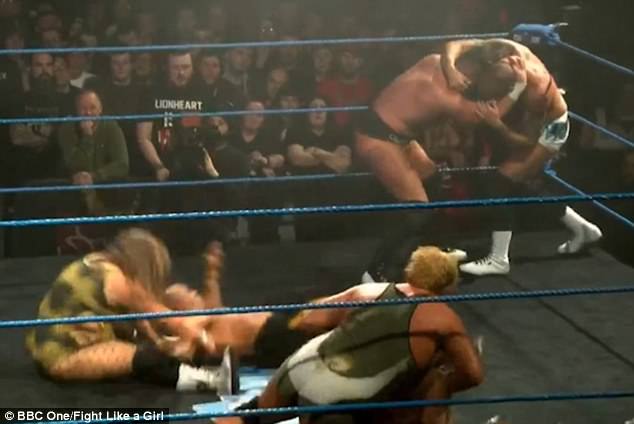 Champion: Kim is more comfortable in the ring where she has fought both male and female competitors. Body-slamming, head locks and dives are just some of her specialities

The contrast between her two worlds is not lost on Kim, who explains exactly what it’s like to lead her double life in BBC One’s new documentary Fight Like A Girl, which airs on Monday night.

Kim, who is 5ft 5in and weighs 14st 8lb, also speaks of the challenges of breaking into what was once a very male-dominated industry.

She says: ‘When I first started training for wrestling, certainly in my school there wasn’t many other girls. All the wrestlers that were on television were all “supermodels”.

‘Women’s wrestling was just not respected. It was difficult for me as a girl and because I was a big girl. I think a lot of people are surprised when I am there because they take one look at me and think “she’s not going to last five minutes”…

‘But I am really, really proud of that. So proud of the stigma that I had for it, so proud that I didn’t let people’s snide comments get to me.’ 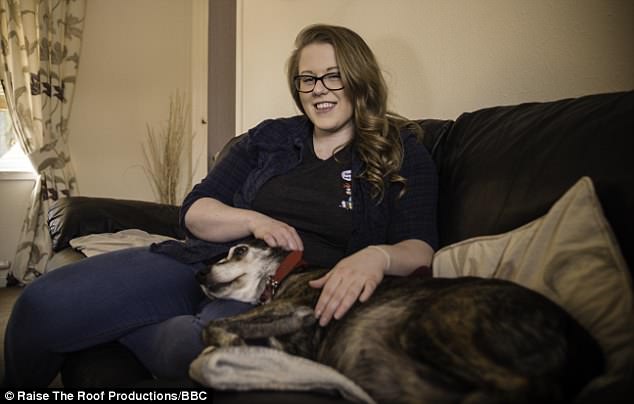 Kim jetsets all around the world taking part in wrestling matches, but when she can she enjoys down time with her family and dog 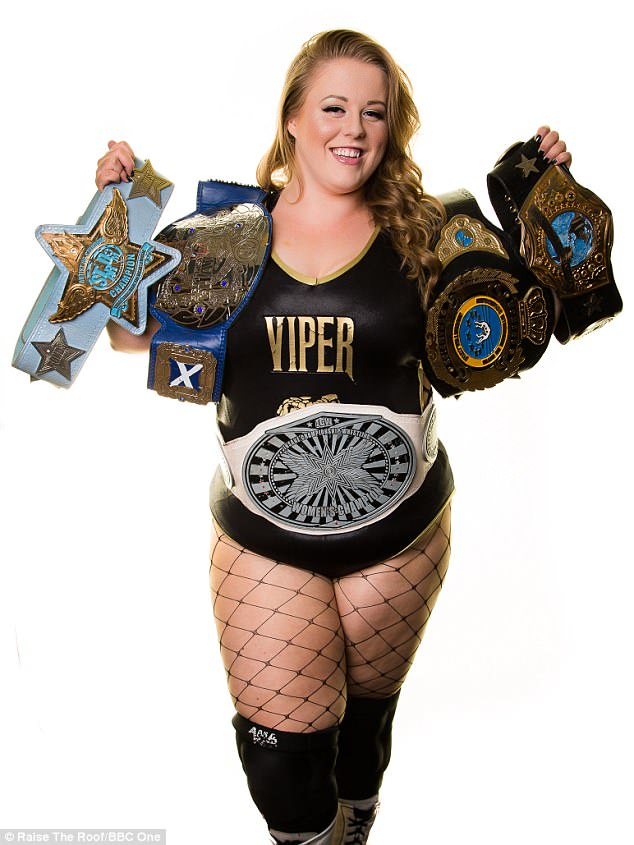 Kim fell in love with the sport as a child and started attending a nearby wrestling school when she was 16.

She now competes in up to four matches a week and has made tens of thousands of pounds taking on both male and female wrestlers.

However Kim explains that her success has come at a personal cost.

She tells how she often misses out on family birthdays, her nephews growing up – and doesn’t have the time to commit to a relationship.

She says: ‘Some people say that being in the spotlight is the loneliest place in the world. 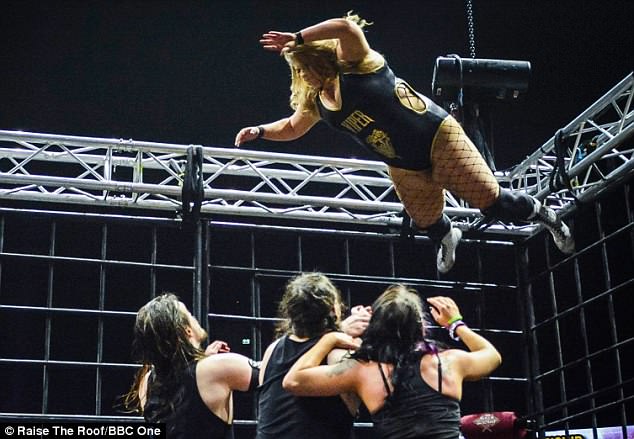 Kim as Viper shows off some of her stunning wrestling moves, where pros often have to put themselves in precarious positions to get the stunt right 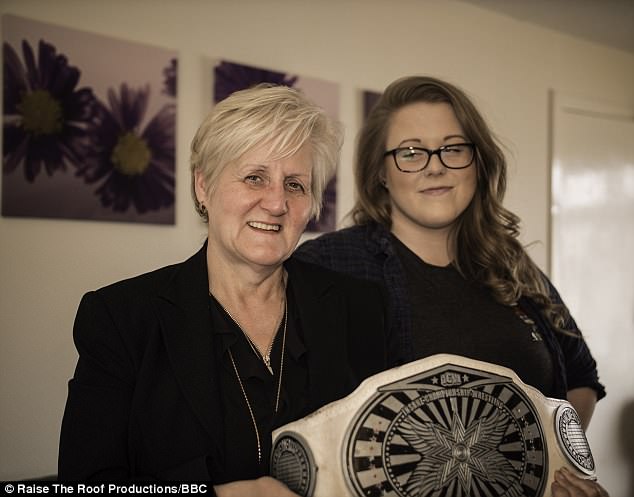 Kim has support from her family and friends, pictured with her mother Yvonne, but she has said she finds it lonely in the spotlight

‘It’s hard to build relationships when you don’t know if you’re going to be on the other side of the world. That’s the hard part of it, you belong to everybody and nobody.’

But she also loves what she does, adding: ‘Travelling the world and living your dream – you can’t beat that.’

In an interview with The Sun, Kim added that she believes her strong attitude intimidates men and has left her unable to find love.

She says: ‘Men find it really intimidating knowing I could beat them up or lift them over my head. I’m also a big girl and a big personality, so it will take a special guy.

‘I am a big lady and lot of guys don’t like that. I am very driven. Sometimes men feel that they can’t live up to that and it scares them off.’

Kim, who has earned tens of thousands of pounds through wrestling, has her sights set on one day joining WWE, the global wrestling brand and pinnacle of the sport. 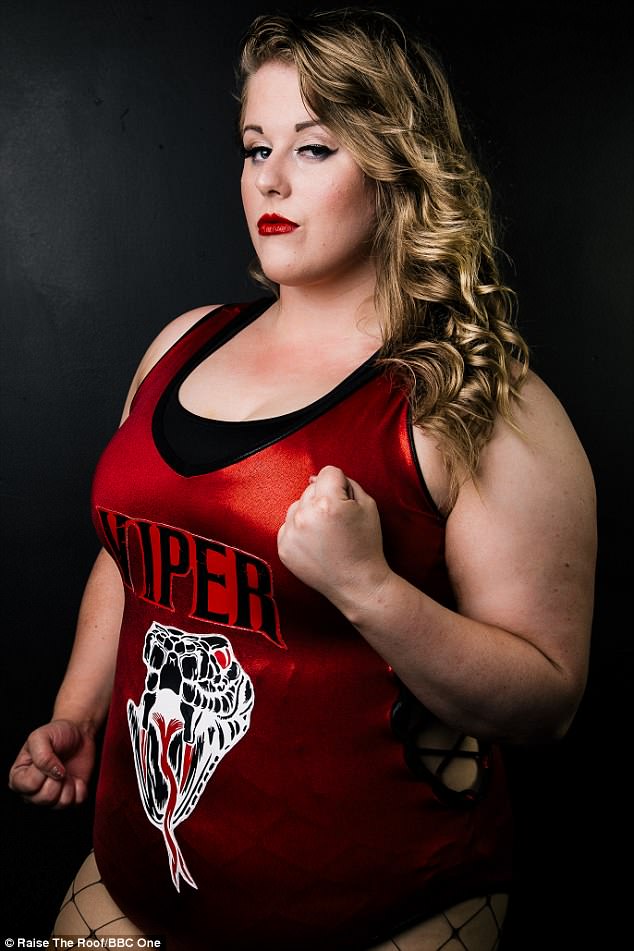 The programme shows Kim training for a double world title bout in Japan.

She admits she initially struggled when competing in Asia because of how her frame made her standout in a crowd.

But now she is regularly stopped by fans desperate to snap a selfie with their favourite wrestler.

It’s an emotional moment for a dedicated Kim as she breaks down crying happy tears: ‘It feels really amazing. I can’t express some of the things I have gone through in my wrestling career, people wrote me off a lot because of my size and what I look like.

‘They thought because I was big and some sort of blonde girl that was never going to get anywhere and now I have two belts from the top companies in the world.’

She added: ‘I never thought a farm girl would be sitting in Japan having won two of the prestigious championships and travelling the world and living my dream. Is there anything better?’