In an update that’s both necessary and incredibly behind the times, the World Health Organization announced it will no longer include “gender incongruence,” the organization’s term for gender dysphoria, in the mental disorders chapter of the International Classification of Diseases (ICD) catalog. In January 2022, when the update officially goes into effect, “gender incongruence” will appear in the chapter on sexual health, instead.

As reported by CNN, the WHO expects the change to improve social acceptance among trans people. 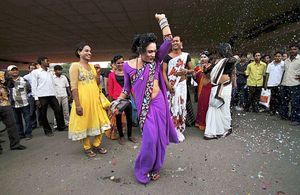 “It was taken out from the mental health disorders because we had a better understanding that this wasn’t actually a mental health condition, and leaving it there was causing stigma,” Dr. Lale Say, coordinator of WHO’s Adolescents and at-Risk Populations team, said in a YouTube announcement.

The ICD is used by healthcare providers to diagnose conditions and help scientists share health info, according to CNN. Moving gender incongruence out of the section on mental health disorders will hopefully lead to better global acceptance of trans people, and better quality healthcare for trans people.