They tried to warn us.

In their television dramas, they sought to depict the most chillingly dystopian scenarios they could imagine – terrifying alternate realities in which life as we knew it had been devastated by revolutions, plagues, technology run amok or hordes of bloodthirsty zombies.

At the time, the writers of these series – The Handmaid's Tale, Westworld and others – wanted to entertain and challenge audiences with dark reflections of society that they could tell themselves were avoidable or too outrageous to transpire. 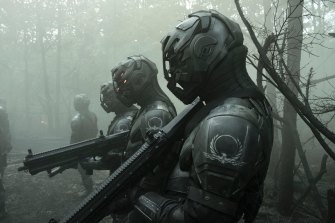 In the sci-fi noir series Altered Carbon, an individual’s consciousness can be inserted into a new body or “sleeve”.Credit:Netflix

But now, amid the uncertainty of the coronavirus pandemic, the people who make these shows are looking at their work in a different light.

These creators and producers are in no mood to gloat or to chastise viewers for failing to heed their admonitions. But they have a clear understanding of why we remain drawn to dystopian entertainment, and they wonder whether current events will have some lasting impact on their work.

And they admit to pangs of remorse for asking audiences to engage with the nightmares they invent.

"You do feel guilty about putting these anxieties in people's minds," said Bruce Miller, creator and showrunner of the TV adaptation of The Handmaid's Tale.

"There's no way not to feel like you somehow wished things into being," he said. "But it shows you how television, and drama in general, has something to tell people about how the world works."

Alison Schapker, the showrunner of Netflix's dark science-fiction series Altered Carbon, said she had become acutely aware of how her work is being received "when television has become one of the fundamental outlets we have to pass time and process what's happening in the day."

She added that viewers' amplified discomfort would invariably seep back into her writing. "What I want to say as a storyteller always comes from the life I'm living, and that life has been completely upended," Schapker said.

On The Handmaid's Tale, adapted from the Margaret Atwood novel, the United States has been ravaged by disease and environmental disaster and remade as a totalitarian state where women are enslaved. Altered Carbon, based on Richard K. Morgan's novel, imagines a future when immortality is made possible by technology – but only for those who can afford it. In HBO's Westworld, adapted from Michael Crichton's thriller, lifelike automatons are subjugated in a world of declining morals and brutal economic disparity. 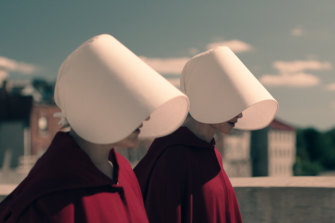 The Handmaid’s Tale creator Bruce Miller: “You do feel guilty about putting these anxieties in people’s minds.”Credit:Hulu

While these dehumanising scenarios have proliferated in popular culture, Jonathan Nolan, a co-creator and showrunner of Westworld, said they all derived from a shared human curiosity to imagine society under stress – while observing from a safe distance.

"As a culture, we're collectively trying out different strategies and outcomes, trying to get a sense for where we might screw things up," Nolan said. He added that though there are utopian fantasies out there too, "people are more interested in watching versions of the world in which things have gone wrong than have gone right."

"If you look at history, there's cycles of war, of poverty, strife, famine and disease," she said. "You know it would be hubris to think we were immune to those cycles forever." 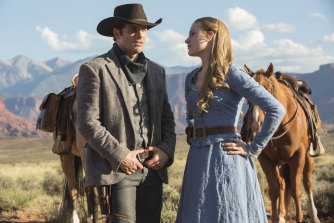 Alex Garland, who wrote and directed the high-tech thriller Devs, said its central ideas – "massive tech companies with unregulated authority, massive imbalances of power and wealth" – required no conjecture on his part. "There's nothing remotely insightful about pointing it out," he said. "It's completely obvious. We all know it's there."

Garland has also contemplated apocalyptic scenarios in his films Annihilation (which finds earth imperiled by alien mutation) and 28 Days Later (the planet is overrun by zombies).

He explained that these kinds of stories offered an enticing form of "wish fulfilment."

"When I was a kid and watching zombie movies," Garland said, "I'd partly be thinking zombies are scary. But I'd also be thinking, wow, it would be amazing if you could bust into any shop and take whatever you wanted."

Of course, Garland said, this kind of voyeurism is satisfying when it occurs "in anticipation, from the safety of things not being like that." He said creators and audiences had convinced themselves that "by engaging with the dystopia, that will vaccinate us against them happening."

Now that civilisation has arrived at an authentic crisis, not unlike the kinds he has dramatised, Garland could not help but wonder if this storytelling had been futile.

"It's a bit like doing a Twitter protest," he said. "It sounds like I'm saying something. But what's the actual result? Probably just another noise bouncing around the echo chamber." 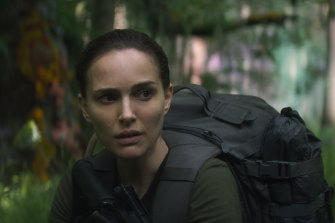 Do these dystopian stories really have any power to prepare us for impending adversity?

Miller, The Handmaid's Tale showrunner, said this genre at least offered the comforting perception that individuals can have some control over their chaotic environments.

"We always want to tell stories in which one person's decisions have an effect," he said. "And in a dystopian world, because it's more stripped down to its essentials, the choices are simpler. You can take the problem you're interested in and put it at the centre."

But in the weeks and months to come, will audiences lose their appetite for imaginary worlds gone wrong, and instead seek out stories where things turn out for the better?

These TV producers cautioned against the idea of rewriting their series to address the coronavirus pandemic head-on.

"The thing that's happening at the moment is completely real," said Garland, whose work on Devs is mostly complete. "You're not going to get any meaningful reaction to what is happening now for at least a few years."

Schapker, from Altered Carbon, echoed these sentiments, saying that these shows did not need to be turned into sentimental fantasies or dismal dirges either. The responsibility of storytellers, she said, is to absorb "the complexity of the moment and reflect it in our work."

The cast and crew of The Handmaid's Tale were about two weeks into filming the first new episodes for the fourth season, Miller said, when they had to halt production as concerns about the coronavirus mounted.

Whatever transpires between now and when filming is able to resume, Miller said it was unlikely that these episodes would be changed, whether to reference real-life events or to adjust their tone.

"God knows what things are going to be like by the time this season of the show comes out," he said. "When you try to hit a target and the target hasn't even materialised yet, it's a little difficult."

At the same time, Miller said he and his colleagues were still writing the last episodes of this new season, and that it was all but assured the ongoing calamity would influence their process in ways they cannot yet predict.

While their overall goal – "to tell a story and make people feel connected to it" – remains the same, Miller said, "part of my job is to be a delicate flower, to feel what's going on in the world. It does change what we write and it will certainly change what we discuss, story-wise."

The Westworld producers said they had finished filming the third season of the show, but a lengthy process of post-production and special effects still lay ahead, one that they were trying to figure out how to run remotely while they worked from home.

Nolan and Joy said they, too, could not suddenly turn their show into a sentimental fantasy. "There's no way to change our creative DNA and write about something that's not organic to our thoughts," Joy said.

What they can do is follow another dramatic tradition and populate their stories with heroic characters who, Joy said, can stand as "models for people to look at them and say, we'll soldier on."

Dystopian narratives, she said, may be "drama about a world that can be cruel, random and broken, but the important thing is that, in the face of a world like that, humans do not have to be cruel, random or broken."