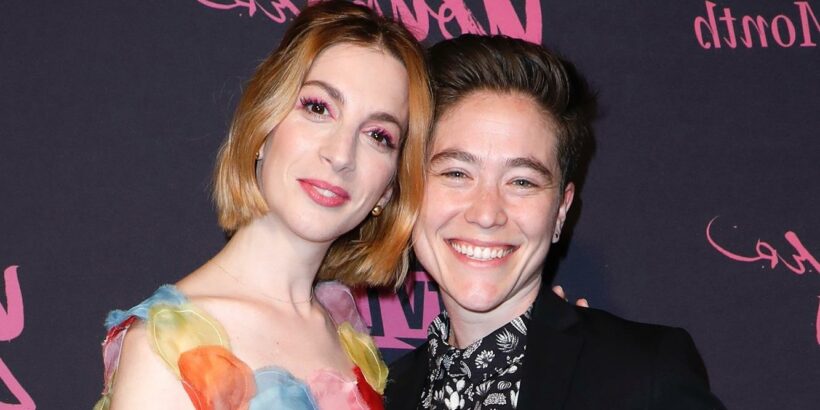 “Thrilled to share the very happy news that @liebhan and I are expecting our first gayby! We couldn’t be more excited to start our parenthood journey!” Bernard, 34, wrote via Instagram on Thursday, November 4. “Creating a queer family in a world where lgbtq+ rights are constantly under threat is a daunting task.”

The New York native shared that loving Lieberman, 34, has “been one of the most profound highlights” of her life, noting that she is “honored” she gets to “be a parent” alongside the producer.

“Because I am who I am I’d like to say the following: pregnancy is a choice, no one should be forced by law to do this. And please — I urge you to vote for the people in this midterm election who will protect our right to be a family, not threaten to obliterate it,” Bernard concluded the post, which featured a sweet snap of the Chicago Med alum outside in a field cradling her baby bump.

Following her announcement, friends and fans flocked to the comment section of Bernard’s post to congratulate the couple on their big news. So thrilled for you three!!! ❤️❤️❤️,” Mandy Moore wrote, while Bridgerton’s Phoebe Dynevor replied, “Oh oh oh congratulations ❤️❤️.”

Bernard previously played pansexual publicist Lauren on Younger for the entirety of the show’s seven-season run from 2015 to 2021. In 2017, she opened up to Entertainment Tonight about how the character has helped her understand her own sexuality.

“[Lauren’s] confidence has helped me a lot. It helped me in a few different ways: Her confidence helped me with my own kind of nervous and self struggles, but she’s also helped me with my sexual identity,” she said. “I don’t identify as straight. I’ve always felt this way, but now it’s part of the conversation, we can talk about it. There’s language for it.”

Three years later, the Transparent actress announced that she and Lieberman were engaged. “We said YES,” she wrote in a caption alongside a snap of the duo lounging on the couch with their dog Henry.

In September 2021, the lovebirds tied the knot at The Boathouse in Brooklyn, New York, alongside their closest family and friends.

“WIVES! Perfect day, perfect party,”  Bernard wrote via Instagram at the time. WHAT A SURREAL JOY TO BE MARRIED TO MY TREASURE!”

The Sully star then took to social media once again to share more sweet snaps from their big day on their one year anniversary in September, writing, “HAPPY ANNI TO MY BRIGHTEST LIGHT! To the first of many many 💕🌈👩‍❤️‍👩.”