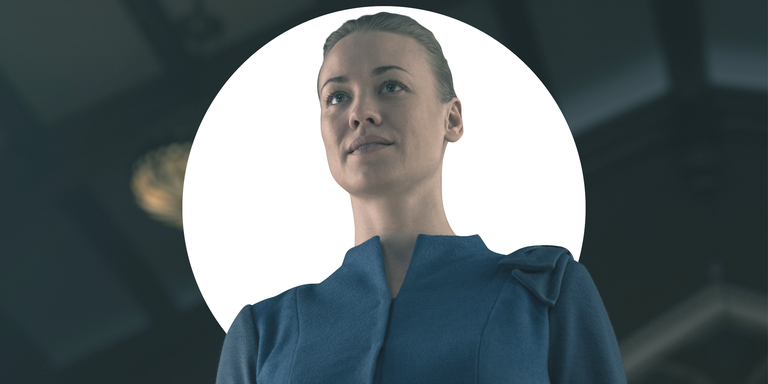 Serena Joy was nobody’s favorite character in Season 1 of The Handmaid’s Tale. As one of the architects of the misogynist dystopia of Gilead, Serena is the epitome of complicit privilege. She is relentlessly cruel to her Handmaid and shows no guilt for enjoying the status and power (by proxy of her husband) afforded her in this new world, safe in the knowledge that she’s protected.

Until she’s not. Throughout Season 2, Serena has become one of the show’s most nuanced and compelling characters, and Yvonne Strahovski’s simmering, subtle performance is utterly mesmerizing as Serena belatedly confronts the horror of the world she helped create. In last week’s season finale, she finally leaned what should have been obvious to her a long time ago—that a society built upon the dehumanization and enslavement of women will never keep her safe, and more importantly, will never keep her daughter safe.

BAZAAR.com sat down with Strahovski to discuss Serena’s overdue and incomplete moral awakening, her prickly intimacy with June (Elisabeth Moss), and what to expect from Season 3.

Harper’s BAZAAR: Watching Serena and June’s relationship evolve this season has been fascinating. What’s your take on how Serena sees June?

Yvonne Strahovski: Their relationship is incredibly tumultuous and it’s ever-changing, sort of like the ocean. I really see it as a love-hate relationship, because there are things about Offred that [Serena] despises: the way Offred talks back to her and is cheeky and manipulative, but at the same time I think she can’t help but respect that part of her. She knows Offred is smart, and capable, and in a weird way Serena needs a friend, and needs a confidante in this world. I think in a subconscious way, she does try to develop that with Offred, or maybe hope for that sometimes, but it just never really works out. There are these beautiful moments where you see them come together in Season 2, and then break apart just as quickly, which is the rollercoaster part of it. I love that we walk that line of will-they-won’t-they.

HB: I loved the evolution of their relationship, which made the rape scene in Episode 10—in which Serena holds down June while Fred rapes her—all the more brutal and jarring. It’s a horrible scene to watch; what was it like to shoot?

YS: That was really a tough one. It was one of the more powerful scenes that we’ve shot, and coming into it from the beating [in Episode 8], I think Serena’s completely fed up. It’s her wanting what she wants, which is always why she acts out. She wants the baby and can’t have it, and all of these frustrations—of being infertile, not being able to have a child, having to have a Handmaid, knowing that the child is there and can we just get it out already, knowing that Offred is talking back to her again—it’s a culmination of a lot of things which leads her into this moment that she perhaps hasn’t thought through very well. It’s always a very strange position to be in, to be the actor that is justifying these types of moves for the character—you kind of feel really dirty afterwards! As an actor, I must justify and truly understand Serena and why she does these things, while at the same time completely despising her and sharing the audience’s reaction toward her.

HB: It’s interesting in the following episode that Serena brings up that incident to Fred during their fight—“You raped her yesterday”—and notably uses the word rape, which we seldom hear in Gilead.

YS: I think Serena is quite aware of the things she does and the things that happen around her. Her bringing that up [to Fred] is kind of weird, and I think it’s an attack in the moment, but I think it’s also expressing a lot of self-doubt about what she participated in. She has to know that she was totally complicit in that, so it’s really loaded.

“As an actor, I must justify and truly understand Serena while at the same time completely despising her.”

HB: When Serena first enlists June as her editor and they join forces behind Fred’s back, it felt like Serena was really getting back in touch with her working life as a writer, which she’s lost in Gilead. Is that how you read that moment?

YS: Yeah, I think it’s really exquisite for her to do that. It’s so sad for her to have given up that part of herself, even though ultimately, she does believe that it’s for the greater good. I think her belief is that her struggle will be the first-generation struggle, and the next generation won’t know any better because they never knew that America existed in the form that it did pre-Gilead. It’s that fine line of loving something from the past, but also understanding that it had to go in order for this new society to flourish. It’s a struggle for her.

HB: And ultimately in the finale, when she reads the Bible out loud to the Council, she seems to have decided that giving up words entirely is too great of a cost.

YS: I think she’s quite aware that the male council is probably not going to bite on this idea [of letting children read the Bible], although obviously there is some hope because she does go through with the presentation. I think it’s more about the fact that she just does it and she can live with herself knowing she really did try to do something noble, something that is genuinely for a greater good. It’s part of this whole arc of Serena learning what it is to be a good mother and a mother that sacrifices for her child. Although it does seem like it comes a little too late, and nothing really is going to be done, she still goes through with it. She makes a bold move, and she reads knowing full well that she will probably be punished for it. I think in the back of her mind she’s holding onto the hope that she can move someone on that council—maybe not her husband, but someone.

HB: Do you think it takes her aback that Fred did absolutely nothing to help her, that he just lets her be hauled off and mutilated?

YS: I think it’s a shock, but at the same time, I think she feared that he would do exactly what he ends up doing, just based on what she’s learned about him this season. The beating scene where he punishes her, that’s really the beginning of this transitional period for Serena, and the beginning of her understanding that Fred actually doesn’t keep her safe. And that if he can do that to his wife, what is he going to do to the child?

More deeply, that beating is also him turning his back on the very foundation of the society they built together. The whole reason he beat her was to punish her for going against his wishes and trying to do everything she possibly could to save the baby that was in the hospital. That’s devastating to her, the fact that their moral belief system is now so divided that Fred actually won’t do everything in his power to save a child. He will choose power and position every time.

HB: Serena letting June take the baby out of Gilead is such a stunning moment, because having a baby has been her entire purpose. What was that moment like to shoot?

YS: It was intense, and it was very moving to read that in the script to begin with. It’s the ultimate sacrifice that Serena could make, giving up the very thing she’s wanted this whole entire time, but it’s this very pivotal moment of having finally learned that being a mother actually means doing the best for your child. In the finale, she really comes to that final understanding that Gilead isn’t best for the child, and she must act accordingly. With June also pushing her, Serena’s not able to turn her back on that truth any more. It’s devastating and beautiful at the same time.

“It’d be interesting to see her try to redeem herself, but maybe not succeed so much, and keep trying anyway.”

HB: With the baby gone, what happens to Serena? What do you think will be driving her now?

YS: That was really the one thing that was holding her to Gilead in the end, was having her own child, and the hope of that. Now that that’s gone, I don’t know where Serena goes. I’ve truly enjoyed this crumbling of Serena this season, and breaking down the pieces that hold her together, and I hope in Season 3 to go down that path even further, and to keep seeing her break down in a lot of ways while continuing to struggle with her original set of moral beliefs. I mean, if she did finally come to the realization that Gilead wasn’t exactly the best place for anybody, as someone who was an architect of it, you’d have so much guilt and you’d have to work through so many feelings. It’d be interesting to see her try to redeem herself, but maybe not succeed so much, and keep trying anyway.

HB: Season 2 really rips the world of Gilead wide open in a way that leaves things very open for Season 3. Where do you see the show going from here?

YS: It seems like everyone’s in deep shit by the end of this season! The commander’s upstairs being held up by Nick with his hand on his gun… It seems like the secret’s out in a lot of ways, in terms of who’s got whose back. I don’t know where it goes from here, but obviously they’re all still stuck in Gilead, and it’s not like everyone can just walk away from one another. I imagine there is going to be quite an intense negotiation of who knows what, and who’s gonna handle what which way, and who’s gonna run or try to. It’s such a massive can of worms now! I’m supposed to be seeing the writers in the next week or two, to visit them and find out more about Season 3. It’s a really interesting place to be.