Spend a day with Brandi Carlile at her property outside of Seattle, and it takes approximately 60 seconds to be thrust into the middle of her extended family — which, on the day Rolling Stone visited in early January, included her bandmates Phil and Tim Hanseroth; Laura and Lydia Rogers from the Secret Sisters; musician Cheyenne Medders; video director Mark Slagle; a huge Rhodesian Ridgeback dog and several chickens. And, of course, Carlile’s wife Catherine and daughters Evangeline and Elijah, who all mull about the kitchen doing normal Saturday things: mixing up mimosas (for Carlile and me), feeding babies (fruit and eggs for Elijah) and making plans for even more relatives to come over later (it’ll be a burger feast).

The whole thing, down to the home itself, is pretty majestic, the kind of place Instagram-hungry boho lodges only wish they could be, save for the four gunshots that fire in the distance as we talk (“probably target shooting,” Carlile shrugs, at one point calling Phil Hanseroth — who is married to Carlile’s sister — to see if her “redneck brother is in town”).

From a morning cocktail to a long talk on the porch, heaps of takeout tacos and a few hours watching Carlile and the Secret Sisters work (she’s once again producing their upcoming record), we got quite a picture of what life for the triple Grammy winner looks like in our recent feature.

1. She once sang with Nickelback.
When Carlile was starting out on the Seattle scene, producer Rick Parasher, who introduced her to the Hanseroth twins, would occasionally bring artists he was working with to her Sunday gigs at local club the Paragon. “He would wrap up at the studio and then he would come and bring Matchbox Twenty and fucking Nickelback and Three Doors Down,” she says. “And then they would get onstage and get drunk and sing with me.” 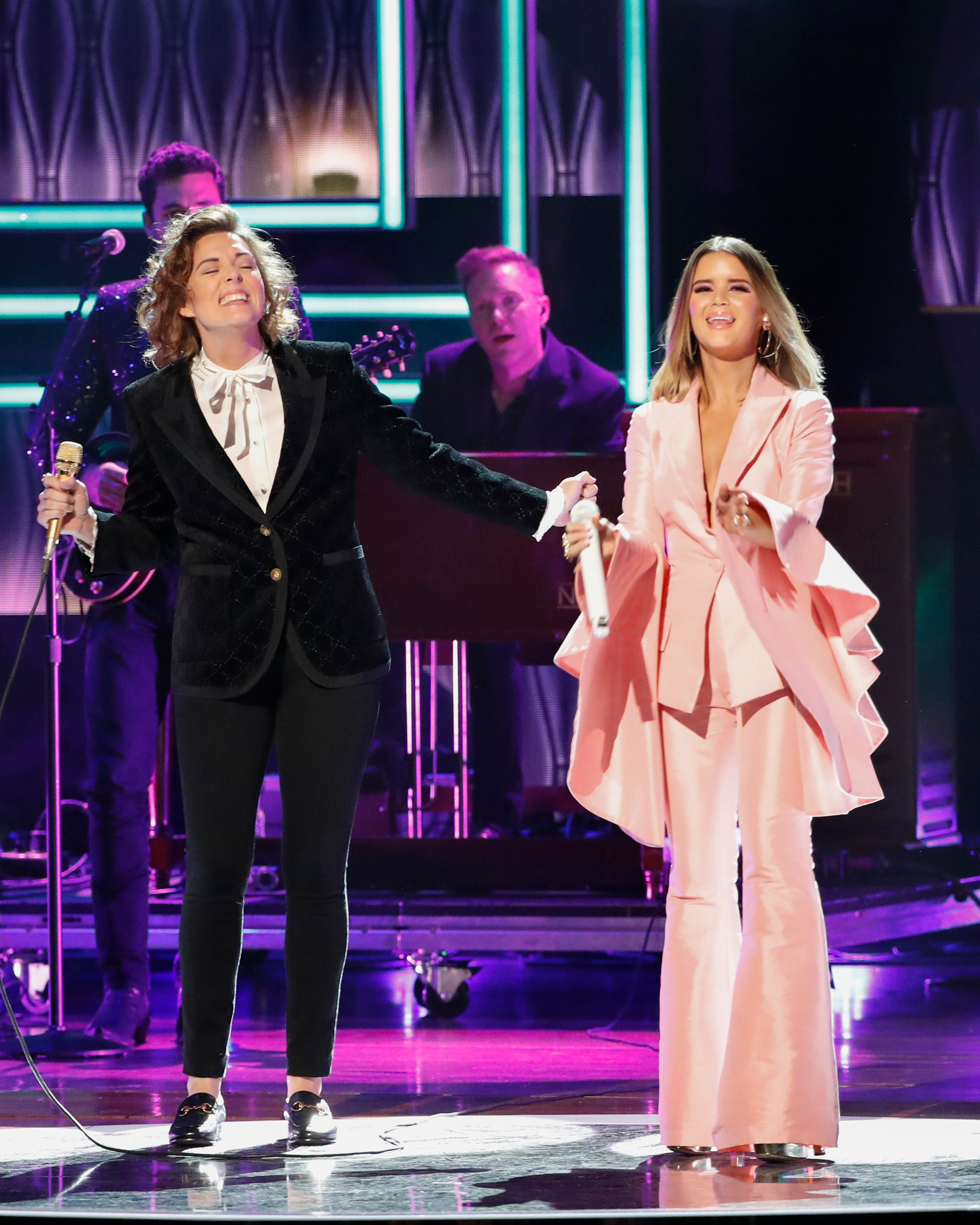 Brandi Carlile: At Home With the Folk-Rock Rebel

2. Her wife Catherine spent a magical day at Joni Mitchell’s house.
Catherine bought Carlile a rare print over the holidays and took it to Mitchell’s house to be signed — secretly flying to Los Angeles to do so. Once Catherine landed, Mitchell’s assistant told her to swing by. “Joni appears in a tracksuit and a Gucci hat…and she spends the afternoon with my wife, taking her into her music room, talking to her for hours. [At the end] Catherine held on to both of Joni’s hands and said, ‘I want you to know that I think you are the most magical white bear woman.’ And Joni said, ‘Thank you, do you know why they call me the white bear woman? Because every once in a while, very rarely, a black bear gives birth to a white bear. And that’s me.’”

3. Carlile re-wrote a version of the original Highwaymen anthem for her Highwomen project, which she considers to be more than just an album: it will be a movement.
“We are making a four-part documentary and a record,” she says. “I re-wrote the original Highwaymen song with Jimmy Webb, with stories of women who died in protest. We wrote a bunch of country songs, Dave Cobb is producing the record and we are saying, ‘We are country artists,’ and we are going to ask they include us. And if they do or don’t, either way it will tell a story about feminism in rural American music.”

4. She has a restaurant named after her.
The Carlile Room in downtown Seattle is her own namesake restaurant, and includes a tasty cocktail named in her honor (the Carlile Cup). “The duck-fat hush puppies are my favorite,” Carlile says, who has a copy of the menu hanging in her kitchen.  We sampled them and they are indeed delicious.

5. She’s an avid fisher.
Carlile loves taking her family on fishing trips, and the hobby is a huge part of her life. She goes to Montana, fishes in the south for catfish and bass, in the Midwest for Walleye, Alaska for halibut and the local lakes for trout. “It’s kind of rednecky but as they say, ‘The tug is the drug,’” Carlile says. “You don’t know what’s down there, but you can connect with something at any time. And, when you do, it’s always a surprise. But if I never connect, I still leave happy.”

6. She was a vegetarian — but only very briefly.
“When I was 15 I didn’t eat red meat because I thought that’s what lesbians did,” Carlile says, laughing. “I did that for a few years and I wanted my driver’s license so I could drive to Burger King and get a Whopper with cheese so no one would know.”

7. She’s very pro gun safety, but careful about the word “control.”
Growing up in Washington, Carlile’s father often kept firearms around the house, giving her a unique perspective as to why gun owners rarely budge when it comes to the Second Amendment. “I’m a pretty staunch advocate for gun safety laws, but I am very careful about using the world ‘control,’” she says. “Not that I don’t think it needs to be controlled, because I do. Because I think it turns off the libertarians and those kinds of thinkers. They hate the word ‘control.’ Some of the safest and most responsible people that I know are gun owners and they take pride in their knowledge of safety. But as soon as they hear the word ‘control’ after the word ‘gun,’ they shut off.”

8. She’s an obsessed fan.
Carlile understands when her fans get a little too passionate, because she’s the same way herself. “I would sit outside of an Indigo Girls concert for hours to see if someone would just sign my guitar,” she says. “I feel like I was meant to have this job because I know what it was like to be an obsessed fan. If you can’t obsess, you are not worth being obsessed with. So when I see obsessed fans, I don’t just understand them — I am them.”

9. Now she counts the Indigo Girls as close friends and admirers.
“I think Brandi represents the new generation in a lot of ways,” says Amy Ray, “because she’s not afraid to be herself, but she also has the traditional ‘Grand Ole Opry’ and ‘Bennie and the Jets’ style performer in her, which is all about giving the audience a show and truly entertaining them. When a queer woman can do this and be recognized by the mainstream music machine, then something cool is going on.”

10. Elton John is always just one email away.
Carlile and Sir Elton have become close over the years, and on the morning of the Grammy nominations, he sent her two emails (at one point during our interview, she fires off a note back to him). One time he sent her everything that Buffy Sainte-Marie ever recorded, turning her into a huge fan.

11. She loves Gucci, but isn’t precious about it.
“I have two pairs of these,” Carlile says about the fur-lined Gucci loafers she wears on the day of our interview. “I know they are special, but I think it’s funny to not treat them special. Just walk around the farm in them. Walk through the horseshit in them. They’re shoes, right?”

12. She likes to imagine what Freddie Mercury would be like if he were still alive.
“I think Freddie would be sitting here smoking a long cigarette and calling us darling,” Carlile says. “I think he would be perfectly offensive and hate PC culture. I think he invented the rock star. I don’t think the heterosexual frontmen of today’s rock bands would be allowed to indulge in the kind of femininity they indulged in if Freddie Mercury had not been stigmatized.”

13. She loves Maren Morris, and thinks she’s great for country music.
“Maren, I fucking love her,” Carlile says. “I just think she is really outspoken.” Carlile invited Maren to sing at her all-women festival, Girls Just Wanna Weekend, and appears on her upcoming album, Girl.

14. She admires when male artists like Sturgill Simpson make an effort to raise their children as feminists — especially their sons.
“Sturgill Simpson, he’s really trying,” Carlile says. “He sent me a picture of a Christmas present he got for his son, called My First Book of Feminism for Boys.”

15. President Obama is a fan and a friend.
“Obama and I have gotten to talk a lot about altruism and nobility,” she says of the 44th President, who put Carlile’s songs on his year-end playlist two years in a row. “He’s a good and decent person, and he’s been a mentor to me for the better part of a decade. If I reach out to him, he’s always written me back. He’s always been a good person in my life. If I write a song that says something I think is important, he doesn’t tell me, he puts it on one of those goddam lists and it hits me like a ton of bricks.”