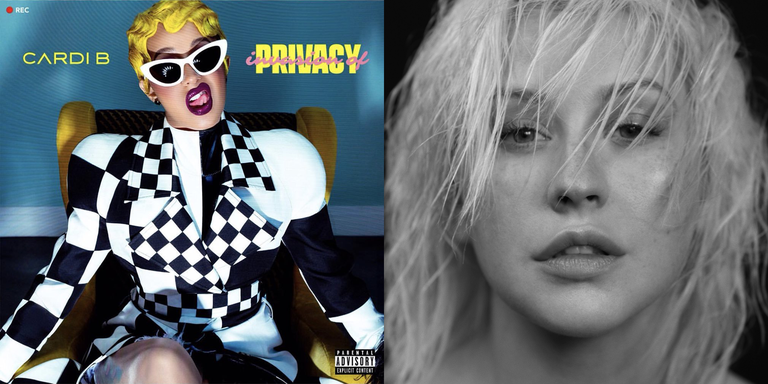 The year of our collective panic is only half over, but already we’ve endured bomb cyclones, nuclear scares, the retirement of Justice Anthony Kennedy, and the end of Channing and Jenna. Beyoncé only knows whats to come in the back half of this monstrous 2018, but at least there’s been plenty of great music to provide a distraction during the odd moments you’re able to stop thinking about…everything else. Here, in no particular order, is a list of the best albums released in the first half of the year.

Swedish sisters Klara and Johanna Söderberg return with another album full of gorgeous, nostalgic folk songs that’ll make you wish you could drop everything and take a road trip to the Grand Canyon. Between their haunting melodies, mournful harmonies, and old-soul lyrics, it’s hard to believe they’re still in their 20s — they could really pass for time travelers sent here from some sepia-toned fantasy of the ’60s.

Comprised of Betsy Wright from Ex Hex and Laura King from Flesh Wounds, Bat Fangs is the super-duo to watch in 2018, and also the one to play whenever you feel like kicking in a wall. Listen to their excellent song “Wolfbite” here while thinking about how great a band name Bat Fangs is.

On her latest album as U.S. Girls, producer and singer Meghan Remy (with help from Toronto group the Cosmic Range) inhabits as many personas as you possibly could in half an hour, from a revenge-seeking woman on “Velvet 4 Sale” to a discouraged lover on “L-Over” and a person severely disappointed by the Obama years on “M.A.H.”

Virginian singer-songwriter Lucy Dacus does plaintive, raw rock songs like nobody else, and her second album Historian is full of beautifully sketched vignettes about love, professional and creative burnout, religion, and aging. It sounds heavy, but Lucy’s impressive vocal range makes it all worth it.

On her third album (not counting 2016’s delightful Christmas record), country music’s biggest glitter fan Kacey Musgraves goes a little poppier than she did on Pageant Material, but not too pop. Imagine a disco queen wearing cowboy boots (“High Horse”) or a heartbreak cure that involves rosé rather than whiskey (“Space Cowboy”) and you’ll get the general idea.

6. Wye Oak, The Louder I Call, The Faster It Runs

Wye Oak’s Jenn Wasner has stayed busy since the band’s last album came out in 2014 — she did a solo album as Flock of Dimes and released a set of Wye Oak outtakes called Tween — but it’s still a thrill to hear her back at work with Andy Stack. The new album’s title track is absolutely gorgeous, but includes enough distortion to please people who still miss the Civilian days.

Kali Uchis’s Isolation is one of those albums that has so many great songs on it that it’s hard to pick a favorite, but the obvious choice is the funk masterpiece “After the Storm” featuring Tyler, the Creator and Bootsy Collins. There’s also the slinky “Tyrant,” featuring Jorja Smith and the upbeat, electro-influenced “In My Dreams.”

Cardi B dominated 2017 with “Bodak Yellow” (the first single by a solo female rapper to to the Billboard Hot 100 in almost 19 years) and it seems unlikely that she’ll slow down in 2018. Invasion of Privacy was every bit worth the wait, from the Migos-assisted swagger of “Drip” to the blistering opener “Thru Your Phone” and the de facto song of the summer “I Like It.”

If you heard Dirty Computer single “Make Me Feel” and thought it sounded like Prince, your ears are not wrong — Janelle says the Purple One was working with her on the album before his death in 2016. “I really miss him, you know, it’s hard for me to talk about him,” she told BBC Radio 1. “But I do miss him, and his spirit will never leave me.” But Prince-inspired funk isn’t the only genre Janelle masters on Dirty Computer. She also dabbles in rap (“Django Jane”), electropop (“Pynk”), and R&B (“Don’t Judge Me”).

Seattle-based La Luz is known for their sometimes-instrumental surf rock, but on Floating Features, they really come into their own. Their sound is deeper, the L.A. witch vibes are on point, and the guitar riffs are more impressive than ever.

At this point Beach House seems physically incapable of making bad music, so there was never a question that 7 would be very good. Though early singles “Dive” and “Lemon Glow” sounded pretty Beach House-y, the band did take a creative leap this time around, breaking their previous rule that every sound they made in studio could be recreated on stage.

12. Courtney Barnett, Tell Me How You Really Feel

Courtney Barnett just released Lotta Sea Lice with Kurt Vile last fall, but she’s already back again with a new solo album because sleep is for the weak. First single “Nameless, Faceless” finds Courtney singing some of the dumber insults she’s gotten from anonymous commenters, with backing vocals by the Breeders’ Kim Deal. If only we could all deal with trolls this way.

It’s been five years since Neko case released her last album, but she’s done plenty since then — two albums with the New Pornographers, one with Laura Veirs and K.D. Lang, and her own career-spanning box set. Still, there’s nothing like solo Neko to kill the blues and/or make them worse (if that’s what you’re into), and Hell-On is right up there with Middle Cyclone and Fox Confessor Brings the Flood as one of her best.

You might know Jorja Smith from her More Life collaborations with Drake, or her appearance on the Kali Uchis song “Tyrant,” but her debut album Lost & Found is the thing that ought to make her a star. Compared to that of her aforementioned colleagues, Jorja’s sound is relatively pared down, but her multifaceted voice can express a full range of emotion.

Finally: THE RETURN OF LEGENDTINA. After six years and countless episodes of The Voice, Christina is back with Liberation, her first album since 2012’s Lotus and a true masterpiece. This album has everything: a Sound of Music sample, Ty Dolla $ign, 2 Chainz, a reggae track, and Demi Lovato. We are all so blessed.

16. The Carters, Everything Is Love

Few people would argue that Beyoncé and Jay-Z’s long-rumored joint album is better than Lemonade or 4:44, but it is the perfect capstone to their strange musical triptych dedicated to their marriage; it’s also always a treat to hear Beyoncé rap.