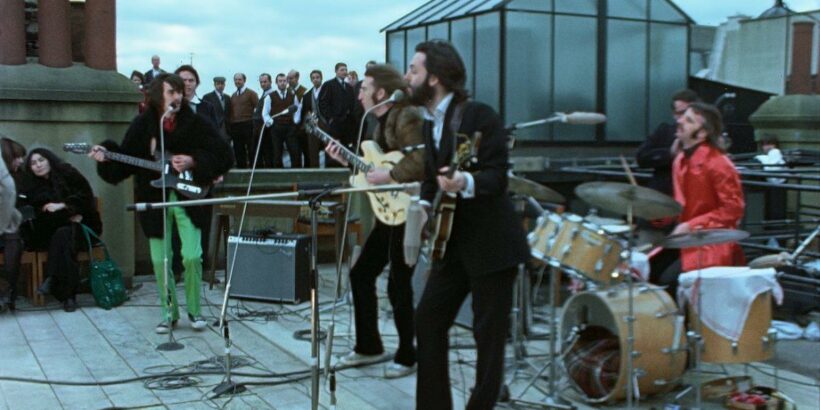 It’s been a week since we’ve been given another window into the working relationship of The Beatles with Peter Jackson’s mammoth of a documentary, The Beatles: Get Back. However, that doesn’t mean we’re completely over it. Far from it, actually. We’ve watched all seven hours, tried to analyze every chord, lyric, and audio clip. Yet, now that we’ve finished it, we miss being back in those studios with the Fab Four. It feels like something’s missing. We can’t stop thinking about Jackson’s masterpiece, especially the most beautiful moments. Here are a few.

15. Maureen Starkey was The Beatles’ biggest fan on the rooftop

Many fans forget that Ringo Starr’s wife, Maureen Starkey, was one of The Beatles’ first fans, way back when they frequented the Cavern Club in Liverpool. Rolling Stone pointed out that she was the only person on the rooftop of Apple headquarters who’d “ever stood in line and paid money to hear this band.” So when The Beatles concluded their set on the rooftop before the cops almost arrested them, we weren’t surprised to hear Maureen’s eager claps. It was a beautiful full-circle moment. “Thanks, Mo,” Paul McCartney said.

14. The group peeked over to see their crowd during the rooftop performance

After playing a couple of numbers on the rooftop, The Beatles peered over the edge to see their audience. The people down on the street were the reason why The Beatles were doing what they were doing. We also loved how most of the street interviews were so positive. Fans wanted to hear their favorite band again.

13. George Harrison wanted to release a solo album but didn’t want to ruin ‘the Beatle bit’

There was a moment at Apple Studios where George Harrison told John Lennon that he had enough songs stockpiled “for the next 10 years or albums.” He said he wanted to do a solo album because it “would be nice to mainly get them all out the way. And secondly, just to hear what all mine are like all together.” However, George didn’t want to step on anyone’s toes. He still wanted The Beatles on the side, even though he’d just recently quit. “But it’d be nice if any of us can do separate things as well. That way, it also preserves this The Beatles bit of it more,” he said.

12. Linda’s daughter Heather stole the show for a bit

At the beginning of Part 3, Linda Eastman, Paul’s girlfriend, and soon-to-be wife, brought her daughter Heather to the studio. The little girl-turned rockin’ roller absolutely took control. She sat right on Paul’s lap as The Beatles jammed and even performed a little. She drummed along with Ringo, and when she screamed into the microphone, John yelled, “Yoko!” We couldn’t get enough of her as she brushed Paul’s hair either.

11. The Beatles talked in ‘Beatle code’ during John, George, and Ringo’s performance of Paul’s ‘I Lost My Little Girl’

There’s a scene in Part 2 when John, George, and Ringo play “I Lost My Little Girl,” the first song Paul ever wrote at age 14. He wrote it about his mother, who died of cancer. It was a beautiful moment because the three Beatles were communicating with Paul in “Beatle code.” Rolling Stone wrote, “A heavy moment, but a discreet one — nobody else in the room could have any idea what this song was, or what it meant. As always, they communicate in ‘Beatle code,’ as John called it — a private language only these four friends can share.”

10. George and Ringo had a sweet collaboration on ‘Octopus’s Garden’

There was a sweet moment when George and Ringo collaborated on “Octopus’s Garden.” Ringo played the piano while George helped him on guitar. It was a short moment, but it gave George and Ringo a respite amongst all the other John and Paul collaborations. Ringo did say that George always helped him finish his songs.

When George arrived at Apple Studios one day, he told John that he went to bed late because he had to finish a song. He explained that he kept hearing John’s voice “from about 10 years ago, saying, ‘finish ’em straight away, as soon as you start ’em, finish ’em.’” John replied, “But I never do it, though. I can’t do it, but I know it’s the best.” It was nice hearing that George took John’s advice from so long ago.

8. The group treated all their women respectfully

The Beatles knew how to treat their women. From Paul’s defense of Yoko (“She really is alright”), Linda’s conversations with the crew and taking photos, Maureen’s support on the rooftop, and Pattie’s quick cameo and steamy kiss with George, we love The Beatles’ women even more now. Don’t forget that sweet moment when Ringo handed Yoko a piece of gum, and she broke it in half for John.

7. Mal Evans stole the show too

Another star who stole the show was The Beatles’ road manager, gofer, and anvil player, Mal Evans. He dutifully danced with Heather, got someone to get George the right tie he requested, stalled the cops during the rooftop performance, and smacked that anvil gleefully with a hammer during the band’s rehearsal of “Maxwell’s Silver Hammer.”

6. Paul McCartney thought all the songs they had so far fit into one story

While the group rehearsed “Two Of Us,” Paul cutely suggested telling all the songs for the album in one consecutive story. Rolling Stone wrote that he was such a Beatles fan at that moment that he actually started writing Beatles fan fiction. “It’s like, after ‘Get Back,’ we’re ‘on our way home.’ There’s a story! And there’s another one, ‘Don’t Let Me Down’ — ‘Oh darling, I’ll never let you down.’” John quipped, “Yeah, it’s like you and me are lovers.”

5. Billy Preston had an infectious smile and attitude

When Billy Preston unexpectedly showed up at Apple, he had no idea that the band would soon ask him to accompany them on Let It Be. He truly brought positive vibes and nothing but infectious smiles with him. Thanks to Preston, The Beatles’ rehearsals were completely transformed. After the legendary keyboardist sat down to play, it was hard to tell that the band was at odds with each other just a few short days prior. When he started playing “Don’t Let Me Down” with the group, he gave the song what it was missing. John said, “You’re giving us a lift, Bill!” Later, Preston and John interestingly turned Martin Luther King’s “I Have A Dream” speech into “I Want You (She’s So Heavy).”

4. The Beatles could drag each other but came for anyone else who tried

It was always special when The Beatles came for anyone who tried to drag them, even when they couldn’t stop dragging each other. The day George returned, they took turns dramatically reading and making fun of tabloids about them. It was interesting to see that they could make fun of what the press thought of them straight out of having rows with each other. Rolling Stone pointed out that this is a perfect example of John’s sentiments later: “I can knock the Beatles, but don’t let Mick Jagger knock them.”

3. John defended George and regretted taht they didn’t ‘give him bandages’

During John and Paul’s secretly recorded conversation after George quit, John said he regretted that the band’s problem with George had created a “festering wound.” He hated that none of them had given “him any bandages.” John completely agreed with George about wanting to leave, which was a stark contrast to his earlier thoughts of George’s exit (“We split George’s instruments,” “Get Clapton”). It was a calm yet deathly serious conversation we never knew existed. No shouting at all. In the end, all Paul said was, “Probably when we’re all very old, we’ll all agree with each other. And we’ll all sing together.”

2. John and Paul tried to write songs like they did when they were teenagers

There were a few times when John and Paul tried to rekindle their original songwriting partnership. They hadn’t written together in a long time, but there they were, strumming opposite each other. They revisited some oldies but goodies that they wrote as teenagers and reminisced about earlier days. Seeing Paul get excited about the footage he shot in India was interesting too.

1. The Beatles hugged after George quit

Even after George quit and the remaining Beatles (plus Yoko) embarked on an angry, loud, and almost Nirvana-like rehearsal session, they took time at the end of Part 1 to give each other the sweetest hug we’ve ever seen them give each other. We just would have liked George to have been a part of it. That hug will forever be stuck in our psyche, though, and we’ll imagine they did another one with George at the end of their rooftop performance.

We learned a lot about The Beatles in Jackson’s documentary, but the biggest thing we learned was that the group could still have some of the sweetest moments together, even as most of them wanted to quit.