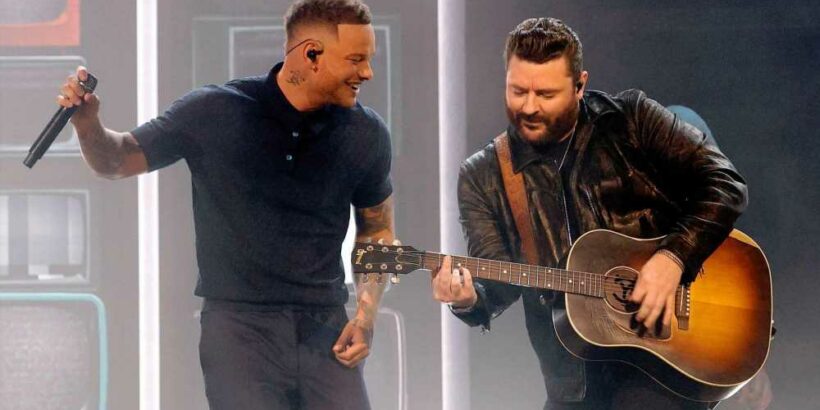 Two heads are better than one, so they say, and the Academy of Country Music voting members would seem to agree. As nominations for the 2022 ACM Awards rolled in on Thursday, numerous collaborative singles like Chris Young and Kane Brown’s “Famous Friends” found their way into major categories alongside Walker Hayes’ breakout hit “Fancy Like” and Morgan Wallen, who was banned from the 2021 ACM Awards after his racial-slur controversy.

Young leads all nominees with seven total nods, including Album of the Year for Famous Friends and several others including Single of the Year and Music Event of the Year for its hit title track. Single of the Year also includes Jordan Davis and Luke Bryan’s “Buy Dirt” and Jason Aldean and Carrie Underwood’s “If I Didn’t Love You,” both of which show up in at least one other category. The Video of the Year nominations are also all collaborations, ranging from Taylor Swift and Chris Stapleton to Carly Pearce and Ashley McBryde.

Hayes’ Applebee’s-referencing “Fancy Like” earned the Alabama native his first ACM nominations, including Single of the Year and Song of the Year, for which he gets dual nods as a co-writer and co-producer. Miranda Lambert matches Hayes’ total of five nominations, tying Reba McEntire’s record for most Female Artist of the Year nominations at 16 and getting other nods for Entertainer of the Year and her Marfa Tapes collaborative album.

Wallen, who had been ruled ineligible for the 2021 ACMs, is back in the running this year (he opened his headlining tour at New York’s Madison Square Garden last night). As it did at the CMA Awards, Wallen’s blockbuster Dangerous: The Double Album is up for Album of the Year alongside The Marfa Tapes and entries by Carly Pearce, Thomas Rhett, and Chris Young. ACM voters also went two steps farther and nominated Wallen’s “7 Summers” as Song of the Year and Wallen himself for Male Artist of the Year. He’ll be up against usual suspects Luke Combs, Thomas Rhett, and Chris Stapleton, as well as fellow first-timer Jimmie Allen.

Combs and Stapleton are also nominated for the night’s top prize, Entertainer of the Year, a category that duplicates the CMA Awards’ 2021 slate of nominees. Rounding it out are Eric Church, Carrie Underwood, and Miranda Lambert.

Here are the 2022 Academy of Country Music Awards nominees:

Video of the Year
“Drunk (And I Don’t Wanna Go Home),” Elle King and Miranda Lambert
“Famous Friends,” Chris Young and Kane Brown
“I Bet You Think About Me (Taylor’s Version),” Taylor Swift featuring Chris Stapleton
“If I Didn’t Love You,” Jason Aldean and Carrie Underwood
“Never Wanted to Be That Girl,” Carly Pearce and Ashley McBryde