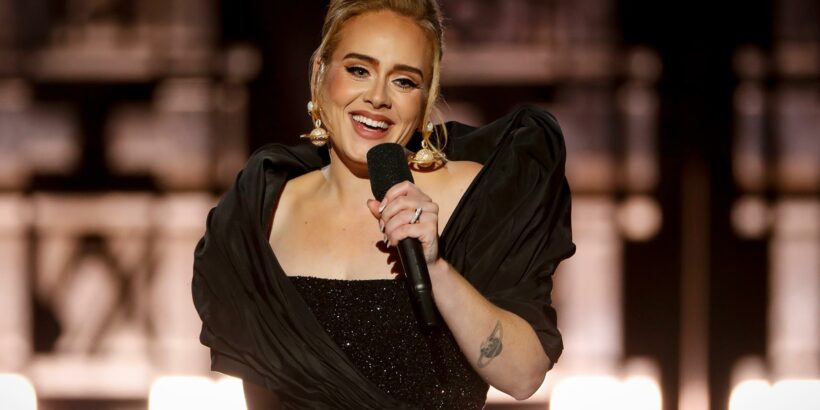 “Mama’s been having a lot of big feelings recently,” Adele announces early on in 30. Hands up—who’s surprised? This is Adele, after all. She was born with big feelings, and ever since the day she first stepped into a recording studio, she’s been off-the-charts brilliant at sharing them with the world. That’s why total strangers hear ourselves in the swoops and raptures of her voice, even as it gets more flexible, stealthy, dangerous. If you were expecting this woman’s divorce album to be a smooth ride, you’re definitely in the wrong place.

Adele has never sounded more ferocious than she does on 30—more alive to her own feelings, more virtuosic at shaping them into songs in the key of her own damn life. It’s her toughest, most powerful album yet. “All love is devout,” Adele declares in the magnificent “Cry Your Heart Out,” and she walks it like she talks it. She travels her own Via Dolorosa, walking a treacherous path of heartache, motherhood, boozy despair, and loneliness.

This is her first batch of songs since the collapse of her marriage—as she summed it up, “Divorce, baby.” But it’s also her turning-thirty album, so she’s navigating a host of turbulent emotional transitions. Which makes it…an Adele album. Let’s face it, she’s never been shy about facing her messiest feelings, but time just makes her bolder. As she confides in the album’s centerpiece, “Hold On,” “Every day feels like the road I’m on / Might just open up and swallow me whole / How do I feel so mighty small/ When I’m struggling to feel at all?” There’s a lot of that going around lately.

“Strangers by Nature” begins the album with a Fender Rhodes keyboard hook and jazzy torch-ballad melodrama, like a mix of Portishead and Lauryn Hill, setting a tone for the whole album. The music is steeped in time-traveling R&B flourishes, going back to Old Hollywood for “Love Is a Game” and 1970s soul for “Hold On.” “All Night Parking” is a duet with the late jazz piano legend Erroll Garner, who died a decade before Adele was born.

You wouldn’t think it was possible, but her vocals have gotten even more expressive. Adele’s voice is a tank division that can tap-dance—the more mature she gets as an artist, the more finesse and tact she brings to the microphone, without sacrificing any of the primal firepower that made her famous in the first place. It’s all there in the single “Easy On Me,” where she pauses mid-song to linger on the first note of “easy” so long you feel like you might pass out, even though you can tell she isn’t breaking a sweat.

On her blockbuster Sunday-night CBS concert special, she introduced the world to “I Drink Wine,” a career highlight that indeed takes inspiration from Elton John and Bernie Taupin, a piano rave where Adele has to play both Captain Fantastic and the Brown Dirt Cowgirl. She grapples with feelings so fierce, she can’t share them with anyone except the mirror, the couch, the second or third empty bottle of the night, a gospel choir, and a planet full of sentient humans wired to every tremble of her voice.

She goes for wild-ass humor in this song as she sings, “When I was a child every single thing could blow my mind / Soaking it all up for fun, but now I only soak up wine.” But she also asks herself tough questions with no answers. “Why am I obsessing about the things I can’t control? Why am I seeking approval from people I don’t even know?” By the end, she’s wishing peace and happiness for her ex, but with no regrets about saying goodbye, because “sometimes the road less traveled is a road best left behind.” What a a song—one of the most ambitious feats she’s ever attempted.

“Cry Your Heart Out” is another career highlight, with sped-up cartoon-chipmunk voices giving way to a seething reggae skank, girl-group handclaps, and Hammond B-3 organ. “When I wake up I’m afraid at the idea of facing the day,” Adele confesses. “I would rather stay home on my own / Drink it all away.” But—typically on a break-up album with no good guys and bad guys—she doesn’t blame anyone else. As she sings, “I created this storm / It’s only fair I have to sit in its rain.”

That even-handed tone is one of the most striking things about 30, considering it’s a divorce album—Adele has zero interest in cheap score-settling. She doesn’t default to the petty payoffs of finding villains to demonize for her emotional chaos; the way she tells the story, it’s all on her. She keeps making you wonder: how can so much drama come from such a well-adjusted, civilized adult?

Her collaborators rise to the occasion, with deft productions from her regular wingman Greg Kurstin as well as Ludwig Goransson, Tobias Jesso, Max Martin and Shellback. And it’s a star-making moment for London producer Inflo, who steps up to the spotlight in gems like the sultry acoustic-guitar workout “Woman Like Me” and the solo show-stopper “Hold On,” which comes on a bit like Ghostface Killah’s Nineties hip-hop tearjerker with Mary J. Blige, “All That I Got Is You.” It builds from spare piano until it explodes into strings and a live band; according to the credits, the choir is “Adele’s crazy friends,” which sounds about right.

Adele fiends for love in all its various forms, from the carnal crabings of “Oh My God” and “Can I Get It” to the maternal pangs of “My Little Love.” But she hits new highs in “To Be Loved,” just a vocal fireworks display with a piano to guide her. Adele breaks down and admits, as if under duress, “Let it be known that I cried for you.” But not before she punches the word “known” over and over until it gushes blood. It’s an exhilarating moment—like the rest of the album, it’s the sound of a woman who suffered through a horrific crisis without losing her soul, her passion, or her sense of humor. And all over 30, you can hear her sense of triumph that she made it all the way through. Hello, from the other side.