Shortly after that 2012 gig they moved to London to launch their career on the world stage. 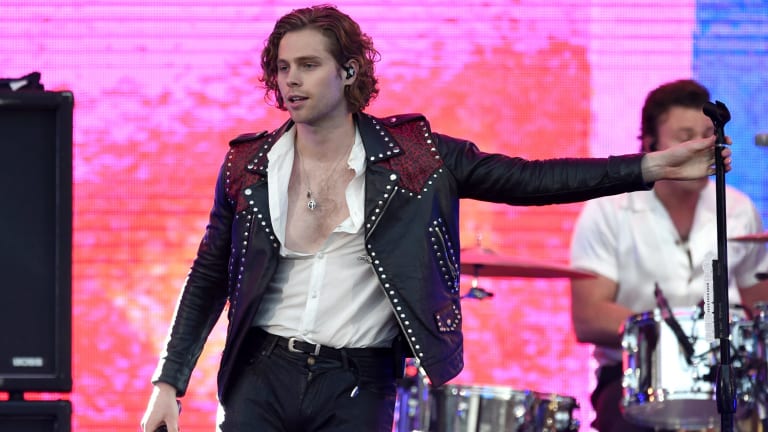 Luke Hemmings shows off his improved wardrobe at a gig in California this month.

Back then each member was in his teens, with frontman Luke Hemmings barely 16.

Looking at him now, sitting in their record label's office on a cloudy Sydney afternoon his demeanour self assured, his accent an odd mix of Australian and American, you can't help but wonder what advice the 21-year-old would give his teenage self as he farewelled his Western Sydney home and shifted to London.

"I would tell him to invest in some better wardrobe essentials," he says.

"Don't drink as many beers," adds bass player Calum Hood, sitting next to him.

"You look back and you go, that kid doesn't know anything about what's going to happen," Hemmings says. "So I don't know what I'd say. Apart from get some better pants."

Even superior fashion choices are unlikely to have prepared the quartet for what awaited them.

After touring the world with One Direction in 2013, the group released their debut major label single, She Looks So Perfect, the following year and watched as the pop-punk anthem sailed to the top of the charts in Britain and Australia.

The hysteria intensified when 2014's debut self-titled album hit No.1 in the US, Australia, Britain and several other territories, cementing their position as a major live draw.

A second album, 2015's Sounds Good Feels Good, and a live album followed in quick succession, with the quartet finally afforded a proper break at the completion of a world tour at the end of 2016. It was a rough comedown.

"I think mentally we were all a bit burned out after working for four years straight," says Hood, 22. "We were surrounded by noise for four years, and we came off that tour and had four months off, and for the first time ever it was just silent.

"We were thrown out in LA and told, 'all right, go and build your lives again'. So at that time we were all very lost.

"It was hard to rebuild your personal life from the ground up. What drove the new album lyrically and sonically, is us regathering and rediscovering who we were as individuals, but also who 5 Seconds of Summer are and what message we wanted to portray."

The result may come as something of a shock to the band's diehard fans.

Their new album, Youngblood, eschews their trademark pop-punk in favour of a Zeitgeist-seizing Top 40 sound in keeping with the songwriters they collaborated with, such as Swedish writing team Carl and Rami (Nicki Minaj, Britney Spears, Madonna) and Justin Tranter (Gwen Stefani, Justin Bieber).

There are moments on Youngblood where it sounds like the work of a completely different group.

"We essentially made three or four different albums," Hood says. "[Some material] was more sample-driven, like the Avalanches, [some had] a lot of 1950s influence, and you'd pour all your emotional energy into what you thought was the right thing just to get to the end of it and be like, 'nah, turn around, go back'. And you'd have to start again."

Some will point to the change in sound as a cynical attempt to stay current. Hemmings brushes away the idea.

"It feels like it's exactly who we are," he says. "A band we're comfortable with in our twenties."